As you all know I've been pondering Blood Bowl here lately, however all I have is a team. I think GW still sells the boxed game, but if so then the rules inside are no doubt reprints of the originals and therefore obsolete. True they could have updated them in the box, however as 'teh interwebz' are hoping the next 'mystery box' is Blood Bowl, I doubt it. Its not like GW really supports any of it's games aside from 40k, WHFB and that other one that nobody plays but they're contractually required to keep around.

So going on the cheap as is usual, I've been perusing ebay for a BB board....and that's really not a cheap option either. Boards (or rather the 'pitch') tend to go for quite a lot just by themselves, even when in poor condition. So the next option was to make one. Usually this entailed foam board and far more effort than I would like to make for a game that I'm only considering. However it was a dead slow day @ work yesterday, and after some perusing the internet for size specs, and some google images for the turns/rerolls/etc., and I 'made' my board using Adobe Illustrator, as seen below: 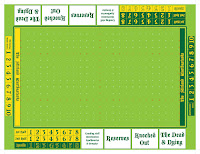 This is a scaled down version, obviously.
It took me a few hours but I'm rather pleased with it. I've printed it out @ actual size, roughly 23" x 34" (we have a ginormous printer here too). I made a few phone calls and found that Kinko's can laminate items that are up to 36" on the short edge. So that's now on my 'to do list' for next Saturday when I'll be near Johnson city (which has the closest one). 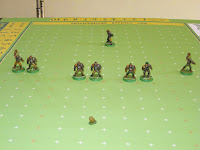 So currently its laid out on my dining room table (which is actually the perfect size for it as the center extension isn't use). I put the team on it to get a feel for their new home turf, however after a photo they were unceremoniously removed as I don't want to potentially scratch it prior to lamination (not like they have any opponents anyways).

Now if you'll excuse me, I need to see if I can find some BB template images & specs to recreate those as well.

On second though, a pile o' work just landed on my desk (finally!) so the templates will have to wait a bit.
Posted by Da Masta Cheef at 7:44 AM

Any way to make a pitch is fine. I have seen squares drawn on cardboard to really custom game tables. Just remember that the squares are bigger than 1 inch (~28 mm) and either scale the pass range ruler or use a passing table.

I have a couple sets of rules printed out from the last time our group was going to play. Something like 4 copies. Let me know if you wanna borrow a set. They were color printout now in a folder or bound. I like that pitch much better than my extra pitches made from gridded presentation easels.

I am so ready for a game of BB

@eriochrome: In looking @ several how-to's online, 30mm seemed to be the consensus on square size (and coincides with your measurement as well). The passing ruler still is a bit of a mystery to me. I presume that each bracket is 3 squares, but until I see one first hand (its been many years since I last held one) I can't be certain.

@War Frog: Thanks! I have the downloaded PDF from GW's site, and have read through a bit of it, not much to be honest though.

That's the ruleset that War Frog and i used the last time we tried to do a league (We press-ganged the Coxes (Coxi?) into playing but we only went a few rounds. Warfrog made a sweet excel Blood Bowl Roster sheet that he might be able to share with you too.

Yeah I had to made a roster in Excel as well. I couldn't find it anywhere either.