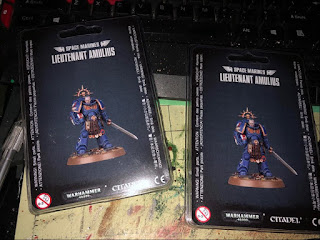 Oh about 6 months or so ago GW offered up their cancelled cons-exclusive Primaris Lt. Amulius up for general distribution. I in fact rather liked the model but to order it from GW directly I found would clock in at approximately $50, summarily resulting in a rant post.

Siph kindly offered to purchase the mini for myself and Neverness and ship it to us directly which in the end still clocked in at the princely sum of $35 a piece. That said, that's still a 30% discount over ordering it from GW because reasons. Thus we both are most grateful for your assistance in getting us these minis good sir!

Now, as you all know I can't leave any character mini well enough alone and decided to convert mine. He looks more a captain than Lt. what with that iron halo on his pack and all. So I thought I'd do an arm swap, removing the power sword arm for an inceptor arm to represent the relic Bellicos bolt rifle (R:24" A:4 S:5 AP: -1 D:2).

However having never really inspected an Inceptor up close before, I didn't realize their armor was much beefier than standard Intercessors and apparently, Lieutenants.  So I had to carve out the sword hand from the Lt., and the hand with bolter from the aforementioned arm.

I'm always a little wary when chopping up a limited release mini as it's not easily replaced (if at all possible) in the event that I do irreparable harm. However with TWO of said minis on my desk, I sensed an opportunity...

transcript of the Facebook IM conversation with Neverness as follows:

DMC: Fucked up that Lt. Oh well, Neverness can probably fix it.

(Immediately thereafter I get a phone call)

Indeed I was and honestly how could I resist?

It took awhile but the weapon transplant was successful. I tossed the stupid blast plate bit into the bitz pile though I kept the gun barrel's protective roll-bar incase there is a need to go all Ogryn and just start bashing bugs with the gun itself.

I also removed the grenade and pouch on his backside armor plate (does it have an actual name? Ass armor?) and added a spare Assault Intercessor Sergeant chainsword (with the similar parts trimmed from it as well). Primaris captains can't have chainswords you say? Well too bad cause mine does! lol, lastly I removed the chaos helm from his base as the Silver Drakes are exclusively (at least in the fluff) fighting the Nids, and so replaced that with a few skulls.

Thus I present to you Silver Drakes' Captain Horridus: 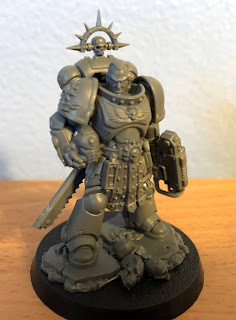 Far too imposing of a figure for a mere Lieutenant. 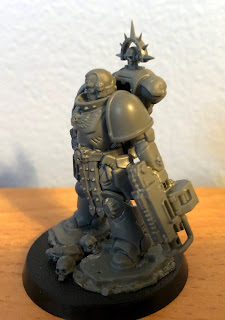 A close up of his Bellicos bolt rifle.
Posted by Da Masta Cheef at 8:14 AM 3 comments: 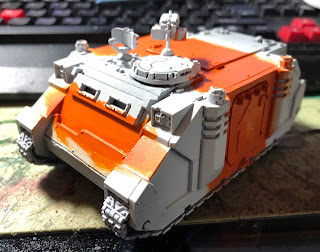 Currently this Rhino serves as the Coyotes' brig. Captives are locked within and subjected to a never ending loop of Rocky Top until their minds melt. These unfortunate, gibbering souls will happily spill all their secrets in order to receive a merciful bolt round to the head, silencing the horror.

Progress has been slow this week due to real life interference, but there has been a little. First up, at Ragsta's suggestion, I decided to try undercoating the Incandescent Coyotes' rhino's orange contrast areas with another, flatter shade of orange. As such it looks here like it's a WIP University of Tennessee Rhino. As the contrast is added, darkening the orange color considerably it will then change to a University of Texas Rhino, before going all 'Woolly Bear' again in the end. 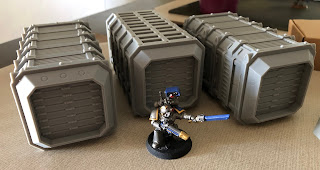 I also bought some 3D printed terrain off of eBay. Really nice stuff and quite reasonably priced as well. The Munitorum containers are solid, LoS blockers, and will go nicely with my still, as yet unfinished container (which is...somewhere). They also came with a bucket load of supply crates and fuel cans which will make for nice objective markers when based. 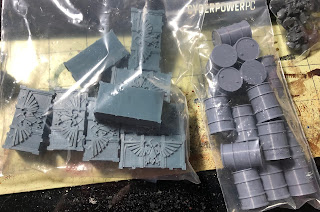 Lastly, Siph has informed me that my Lieutenant WTF? along with Neverness' clone are currently making their way across the warp to us, huzzah!  Despite the circuitous route, this method is still 30% cheaper than if we were to have purchased it from GW directly here in the US. WTF? indeed...

This week in Space Marines... 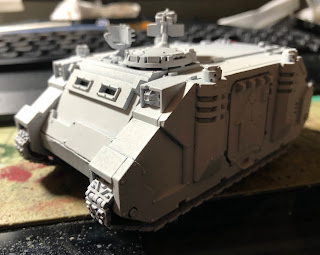 Apparently I can't make a caption today without it being a link to....something. Yet another 'improvement' brought to you by the new Blogger interface. I could leave them feedback, but that has as much  positive effect as going out into my backyard and screaming into the wind...

I didn't torture myself enough with the first one so I thought I'd give it another go. Well, that and I figured that I'd do a second before I rightly changed my mind. Also, why have one woolly bear when you can have two, right? 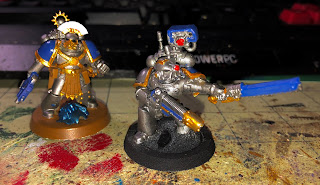 Not too fond of the Centurion's golden face plate, I may go back and repaint that in silver.

I've also been working on a pair of Astral Claws, a Havoc aspiring champion and a Legion Centurion (Lieutenant/Exalted Champion). Both are still very much a WIP. One of the beauties of the Astral Claws as they fought on both sides (loyalist and traitor) whilst having the same appearance. So they can be used as either/or. I have another as yet unpainted (at all) devastator sergeant to take the spot of the above aspiring champion when using them as loyalists. 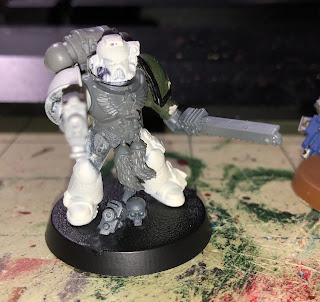 Not sure as to which squad this guy will be leading given that neither of the two I which already have are in need of a sergeant.

Also, whilst digging for parts to 'cleanse' the above Rhino of it's former Black Templars iconography (have at it Zzzzz), I collected enough bitz to piece together another Incandescent Coyotes character of some sort. That chest plate is far too decorated to be a mere bolter grunt. Perhaps I'll make him an Lt., and promote my acting Lt. from last weekend's game to Captain. I'll likely swap that chainsword for something better if I opt for that. Edit: Yeah I think I'll swap that chainsword arm for a powerfist and some sort of backpack ornamentation to serve as a Lt.

Hey what d'ya know? I do play this game!

Yup, 14ish months after I last played 40k, I finally got in a 500 point game. It was also the battlefield debut of the Incandescent Coyotes vs. Bob's Cadians. No scenario beyond just kill each other. Small, simple, relatively quick and easy.

Let me set the scene:

Well, at least I didn't get tabled! Bob said that in our first game of 8th ed, I pasted him so I guess we're even? I dunno, I honestly don't remember but we'll go with it. In hindsight my First Claw ought to have ignored the Russ, and rather charged into the infantry horde but...ya know, meltaguns.

Regardless this was fun and I'm looking forward to playing some more games. I think I'll keep em down to the 500 point mark for the foreseeable future (barring the annual Orks vs. Orks game if Neverness and I can ever get that nailed down).

The Incandescent Coyotes' Razorback is complete!

The following is a recap of this tank's rebuild and repaint stages taken from all of the prior WIP posts. That'll save y'all from having to wade thru them all to see the entire process from start-to-finish for yourselves. Enjoy!


So there ya have it, a Black Templars Rhino reconsecrated (or desecrated depending on your point of view) as an Incandescent Coyotes Razorback! Not sure if I'll tackle the prospect of adding anymore vehicles to the Coyotes' TO&E again, though now that I'm happy with the end result I might...

Just when ya think you were done, the gods of Chaos strike from out of the blue and ruin ensues...


Picking up from my last post, there was another round of touch ups, followed by decals, inking, and finally adding a little tuft of lavender flowers poking up out of that hole in the turret just for Monkeychuka and I was done. All that was left was the clear coat. However I wasn't paying attention sadly and, whilst it was only for a split second before realizing my error, a split second is all that was needed to ruin this model (luckily it was only the one).

Yup, you've likely guessed it already, I grabbed the wrong can and instead of clear coat, I oh so briefly hit this finished mini with a blast of OD green primer! Sad Face. Raging at my stupidity, I ripped the (now) OD green flowers out and then disgustedly put the mini aside. I was in no mood for an immediate repaint (still haven't been).

I tried to salvage the evening by applying decals to the razorback, but that also quickly descended into an exercise in fury and I just had to walk away from my hobby desk for the night. That said, Karma wasn't done delivering a good 'ol fuck you to me for no apparent reason (seriously, WTF? Hell I had to cover for somebody else all day in addition to doing my job!) as I then burnt my dinner, and the following take out was kinda meh too).

So yeah, my Friday night SUCKED, how was yours?

Haven't attempted to retry decals on the razorback yet either, though a 2nd squad of Coyotes have gotten their initial layer of contrast paint at the least.

...when I last left off on my Incandescent Coyotes' Razorback nightmare, it looked well...hideous. However as promised in that post, it is indeed now predominantly black.


Utilizing the good ol' blue painter's tape, I masked off a broad center stripe and a small area on the front and then summarily reprimed it.


MUCH better me thinks. Since these pics were taken, I did some touchups to straighten out the edges along the masking, as well as another coat of orange contrast (most of said touch ups required white paint first). It looks alright I suppose, now will work on the detailing. Being a mostly black box, I don't think this tank will really come alive until I get to my favorite part: the dirtying/weathering stage.

Also, on the Fem Fa'Tau front, the support turret has been properly touched up, and one of the three WIP Shas'Uis is just about ready for decals and inking. I say just about as I noticed a few more touch ups are needed after seeing this close-up pic.