I only got one detail brush (for now, there are more...but I can't have 'em till Christmas). However one was enough to get the painting going again. Indeed, I wanted to paint 8 different things at once, but opted for the good Cap'n., as he necessitated the purchase of said detail brush to begin with.


Whilst he's not yet done, he's certainly much further along than in my last post. Currently he's slathered with a wash and drying (meaning I'm done painting on him for the night). The next few days look to be rainy, so hopefully I'll be able to spare enough time to finish him up before Thursday's post.

The need for new brushes is strong with this one...

Ya know, painting almost full platoon of 15mm infantry for Gruntz, as well as a few partial repaints for X-Wing and ya kinda forget what fine detail is. However whilst base-coating Captain Gunnbjorn, I've realized rather quickly that my detail brushes are all shot and in need of immediate replacement! Despite their small size, those minis aren't too terribly detailed and unlike the Cap'n, they don't really have any nooks and crannies that ya have to get paint into.


The fact that a lot of my paints are getting down to the state of gloppy-sludge at the bottom of the pot isn't helping. Eventually paint reaches the point of no-return, where no amount of thinning will ever suffice. Unfortunately, getting to the FLGS during business hours has been next to impossible here lately, so I guess I'll have to see what the craft stores here in town have to offer.

My Fallout Hobbies decals have arrived!

This was a bit of a pet project of mine for awhile. Preferring to have more than just a unit logos adorning their hulls, I want my tanks and whatever other vehicles I get for The Buffet Assault Group to have 'nose art' as well. Having come up with more logos than I could possibly need (and in pairs incase I fuck one up whilst applying them...which wouldn't be hard with 15mm scaled decals), I filled in the remaining decal sheet space by creating logos for several other projects of mine.

The Buffet Assault Group (Gruntz, as mentioned above)
The 15th Utaupian Regiment (Gruntz)
Da Long Wayz Dezert Groop (assuming they ever get another vehicle...)
The SLDF's 76th Royal Dragoons - 'The Spirit of 76' (for Classic Battletech)
My beloved Wolfy's Fem Fa'Tau (most of whom are still unpainted)
The Black Dragons Space Marine Chapter (Who did you think that old dread was for anyways?)
The Eleventy-First Devonshire Homeguard Regiment (for Bolt Action)

....aaaaaaaaand:  the 'TOP SECRET' part of the decal sheet on the right which is will be part of somebody's Christmas present.

Ron at Fallout Hobbies said all looked good with my artwork, but apparently there was some issue in my placement of said artwork which was causing difficulty in their printing process. So they split it up into 2 sheets, and filled the dead space with extra logos at no extra charge!

I've seen Fallout's decals already show up on Mordian 7th's and Dave Taylor's blogs among others, and as I'm sure you have already guessed, they're awesome! So go and give 'em a look for yourself!

Posted by Da Masta Cheef at 8:11 AM No comments:

Not a whole lot to report on the hobby front as Wolfy and I just returned from a very enjoyable 4-day weekend visiting friends and family in Georgia and South Carolina. As it was a 'short' week leading up to that, about the only thing I accomplished aside from assembling Captain OBGYN was to finish off painting my third infantry squad for my Gruntz army.


All that remains to be painted now is a mortar team, the Vending bot, my Commander-mech, and the two hover tanks. At this rate, I'm liable to have a fully painted army before I even play my first game!
Posted by Da Masta Cheef at 7:00 AM 2 comments:

Does that say Captain OBGYN?

lol, and as you would expect, much laughter ensued!


All I was trying to do was to show my beloved Wolfy my latest ebay impulse buy, but...it was late, her glasses were off and squinting at the screen, well....that's what she said that she saw. After the laughter from the two of us subsided, I corrected her to which she replied with:

The poor bastard hadn't even gotten here yet (though he's since arrived from R'Kansas). Like I said, this was an impulse buy from an Arkansas FLGS that's liquidating a lot of it's stock. New-in-the-blister with shipping clocked in at only $11.48, so for such a cool looking mini I figured 'sure, why not?'

For all of Warmahordes' faults (and to me there are many), it does have some kick-ass models (Convergence excluded). Actually, the Pyg Officer & Mortar Trollkin are what first caught my eye, but I don't think they're available yet and they would have been more expensive anyways.

Also, just to forestall the inevitable (assuming he's not already called me): No Rob, I don't want to play Warmahordes.

Both photos are Copyright of Privateer Press
Posted by Da Masta Cheef at 6:00 AM 4 comments:

In a reply to my last post, Knight of Infinite Resignation commented that several chemicals that can be used for stripping paint from minis, will often soften resin. I didn't think Simple Green would do that, but was alarmed enough to check and see. So, instead of doing my usual of ignoring simple greened minis for several weeks, months (or in at least one case, more than a year), a mere week later I pulled the model out and gave it a good toothbrush scrubbing to see what damage if any had been done.

Turns out, no damage aside from what was inflicted by me during this initial cleaning. There were always a few mis-casts in the legs that bothered me, so I opted to replace the legs entirely this go round with some new replacement bitz purchased via ebay. Not needing to scrub the legs and wanting to get to the underside without obstruction, I simply snapped the old ones off!


It was kinda painful to intentionally break a dreadnought in half...

After a good scrubbing, there was still quite a bit of crud left on the dread. So after popping off the incriminating Chaos bitz and snapping a few quick pics for this post, back into the simple green it went.


This week looks to be a busy one, so odds are the dread will remain submerged for at least a week and a half...
Posted by Da Masta Cheef at 7:00 AM 2 comments:

The next 'chapter' in the life of an old dreadnought...

If I recall correctly, approximately 20 years ago Brad, one of my 40k buddies in Florida worked at a resin casting company. Working the graveyard shift and under the guise of 'training' he cast multiple copies of his SM dreadnought (the multi-melta version), and gave several of us in the gaming group a copy. Forgeworld, whilst in existence wasn't producing dreadnoughts of their own yet, meaning all dreadnoughts were made of pewter! Indeed, when I moved to Tennessee this feather-light dread took many people by complete surprise when they picked it up to give it a look.

Last time I spoke to Brad in person, about five years or so ago whilst visiting in Florida, I mentioned that I still had one of his resin dreads in regular use. He'd long since left mini gaming himself, and was pleasantly surprised to find that any of his old dreads even existed anymore. As such it seems that this dread is the sole survivor!

Like many of my older minis, this Dread has fought in several past armies including the: Iron Hands, Silver Skulls, Chaos Undivided (up to and probably including the Red Corsairs prior to FW getting ahold of them), and The Blood Eagles (CSM Warband of my own creation and in who's colors you see above) just to name a few.

Back in the day of fire frenzying dreadnoughts, I changed it's weapons loadout from the then equipped twin-lascannon and missile launcher to the current twin-heavy bolter (a FW piece), and a dreadnought CCW with heavy flamer to minimize my own casualties. That said, I distinctly remember it killing three of my own chaos marines during it's battlefield-debut with these new weapons. 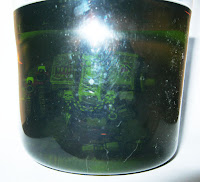 Anyways, skipping forward to the present, and this venerable model has begun the first stage of ritual cleansing in a bath of Simple Green. After a few weeks of that it'll be fully-stripped first of its paint, the old, skinny base as well as any incriminating CSM bits, before being refit for battle with loyalist marines once more. I'll be keeping the twin-heavy bolter, but given that dreads still suck in close combat, I'll be replacing the CCW arm with a missile launcher. This will relegate it to purely the role of fire support, but given that heavy firepower of any kind is generally lacking amongst the few survivors of my (now quite small) 40k armies these days, that'll be just fine I think.

And if it still sucks? Well...its a dread, so what did you expect from it anyways?
Posted by Da Masta Cheef at 7:00 AM 5 comments:

This week on ebay...

Notta whole lot of movement on the hobby front aside from a lot of ebaying stuff off. The long awaited and much maligned (by me) 7th ed Ork codex and data cards sold quite well, as did my forgeworld 30k marines. However not everything is going out of the door, I made some purchases as well. 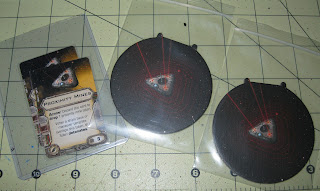 First up, I bought a pair of X-Wing proximity mines after I realized in our last game that I was using the incorrect tokens when Rob handed my an actual proximity mine token. The S&V 'Genius' astromech has suddenly become a favorite of mine and with these tokens, my opponents will no doubt be wary of any low PS Y-Wing I field from now on!

2nd, is actually a purchase from a few weeks back, but it arrived this week from its journey from France. This doubles my Grymn army's armored might, in the form of a 2nd Stug Walker (counts as: an Armored Sentinel). Despite coming from overseas, this one was $6 cheaper than the 1st one bought from an ebay seller here in the US!


Third up and rounding out this post, I removed the former Captain I killed Draigo (the above pic) from ebay after a few weeks with no bids and only a few watchers. He'll once again hold the rank of captain, when he takes command of the shattered remnants of my remaining SM forces (including a survivor or two from his last command). I'm sure that statement will raise a few eyebrows, but I'll just leave it at that for the time being...