With my last post, this blog crested the 100,000 page hits mark! Honestly that's a remarkable number that I don't think I ever thought possible to attain when I started this blog a few years back. So thank you to all who have wandered over to my little corner of 'teh interwebz' to see what I've been up to! Thus it seems fitting to mark the occasion by posting a bat rep of Da' Long Wayz Dezert Groop itself in action!

Da' boys took to da' field this past Saturday vs. Rob and his plague marines for a for one of our usual slug fests (as every game with him turns out to be, don't think we ever have a 1-sided blow out now that he traded off his Ogres). 1500 points, Dawn of War deployment, the Scouring mission. 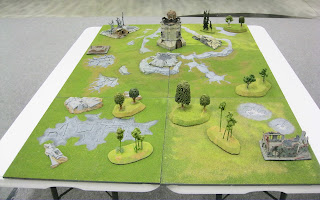 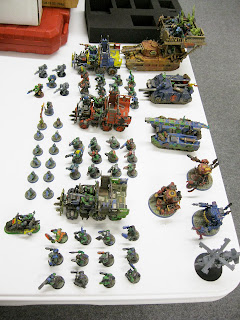 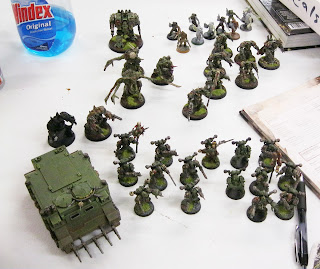 No Rob, not even Windex can clean up the contagions of Nurgle, nice try though... 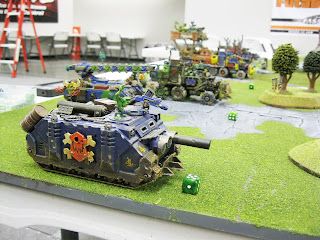 Da Boyz, deployed and ready for da' Banzai charge across the field. 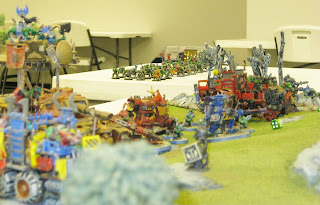 The other side of my deployment zone. The table in the back shows all of the boyz who are in the trukks. 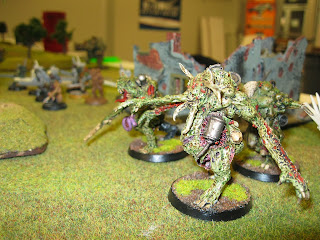 Vile monsters! These would cause me quite a bit of trouble... 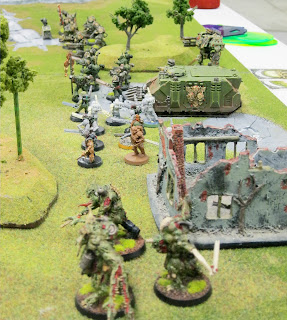 Rob's deployment, You can see the former Colonel Extra-Hand Straken mixed into the cultists in the middle of his line. 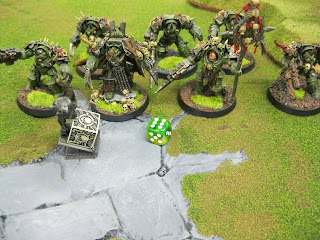 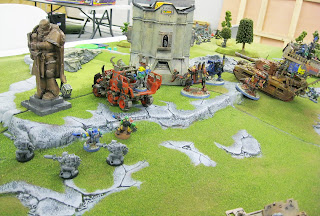 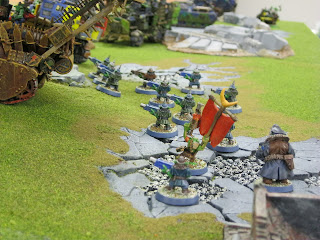 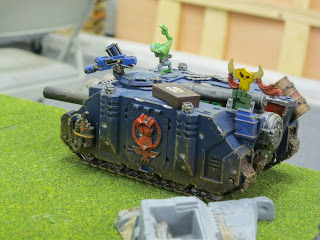 Rob thinks that this is the best tank I've ever done. Its certainly a favorite, though it rarely lasts long on the tabletop. :-/ 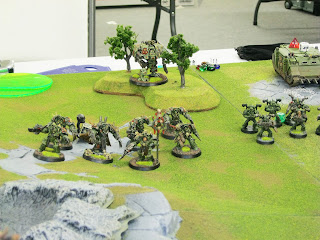 After some typical ork shooting, which produced few casualties, the Plague Marines advance (with the exception of the stunned rhino). 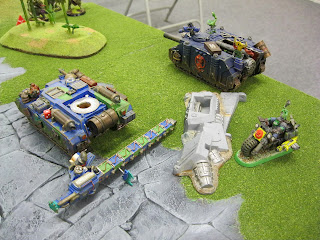 The Hellbrute blows the boom gun off of a looted wagon, and big mek Fix-a-Flat prepares to ride to da' rescue! 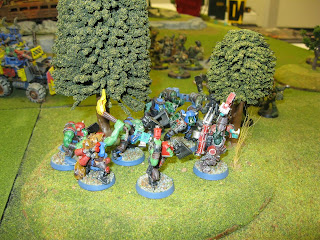 Kapitan Krunch and his boys celebrating after claiming first blood by massacring the Cultists in hand to hand! 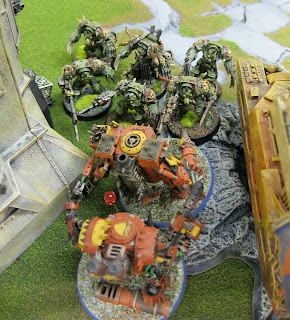 The termies gun down the bloo kan, and then charge the other two! 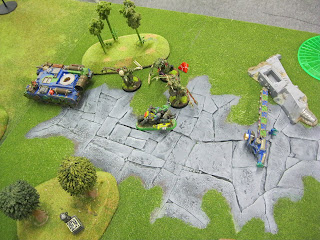 Panicked by the damage, the crew of the looted wagon 'pressed dat' and took off like a bat out of hell, away from Fix-a-flat! Here you see the spawn pursuing after taking out the other looted wagon. 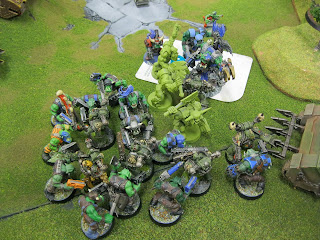 Da Masta Cheef, his Nobs, and a slugga mob get stuck in! 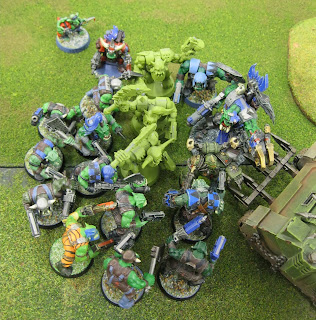 They killed everything, including a sorcerer. However the two champions were too busy comparing powerklaws to bother fighting and they all remained locked in combat. Meanwhile the other plague marine squad was pasting Kapitan Krunch's mob. Da' Kapitan was killed in a challenge, and in return, that champion was turned into a spawn for his efforts! lol. 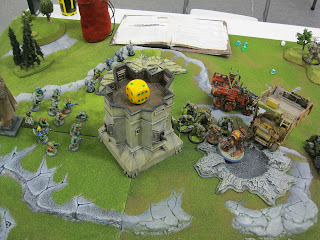 Only one kan to go...whilst the tank bustas repeatedly hit, and fail to do damage to the Hellbrute. 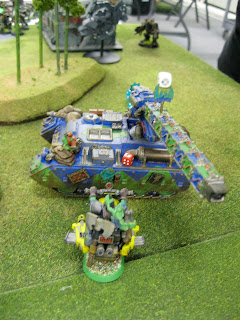 Finally catching the looted wagon, Fix-a-Flat repairs the boom gun, though not its accuracy as its shot at the pursuing spawn went right off the table! In the background the outflanking deff-kopta arrives, zooming past the 'misplaced' deep striking oblit. 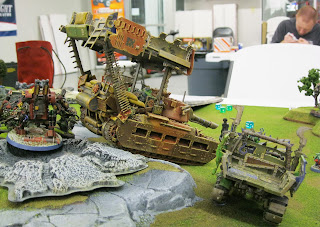 With only 3 people at the shop to play, Screech opted to work on a bolt action tank instead of gaming. His incessant nose blowing became the 'Bugle of Nurgle' to help rally Rob's toops. Here you can see him trying to clear his nasal passages by huffing glue... 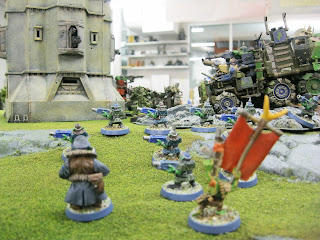 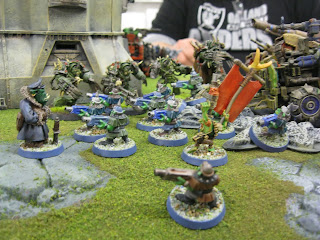 SCHULTZ!!! initiates a suicide charge, and flatly refuses the Plague Lord's challenge! His grots are slaughtered, and he executes the last two after they fail their LD check. SCHULTZ!!! then flees the field to find another Duvishun... 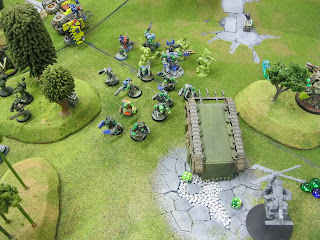 The Deff-kopta takes down the rhino, and the last plague champion finally dies. Da boys' disperse, but is mostly for not as incoming fire guts the slugga boyz. 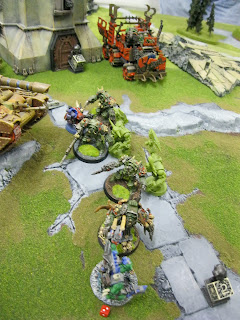 Charging the termies, Da masta Cheef is almost killed before he can even swing by the Lord's lightning claws! Only one FNP save keeps him in the fight! The Nobs begin their futile slog which kills one termie in exchange for all of the nobs. The damned lord would keep blowing his rolls to hit and wound, and yet make a stupid number of invul. saves in the following turns... 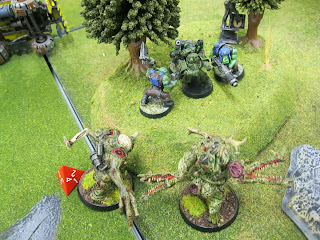 The few remaining slugga boyz, try in vain to clear an objective of one last plague marine. The two spawn, having killed Fix-a-Flat and the other looted wagon, arrive to finish them off and clear the flank! 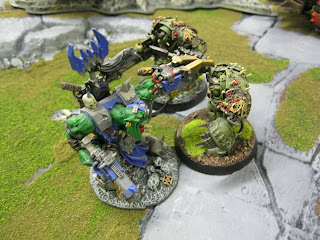 Da' Cheef FINALLY kills the warlord (claiming an extra VP due to his Warlord trait) and takes on the other two termies. He failed one invul. save, whilst they each make theirs and finally falls... 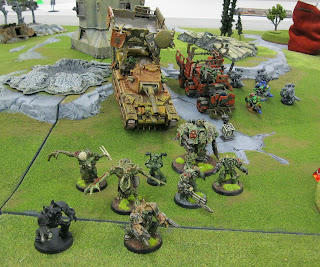 With the game ending we tally up the VPs and the losses. The above are all that remained of both sides, while we tied on VPs with 4 a piece.

All in all it was a fun game, and as much as I don't really like the Ork's current codex, I do like the army. It was fun to drag em' out of their hiding on the shelf for a game. Dunno, I may just leave them in the game cart for another trip to the FLGS next week.

Nice! Looks like it was a good time - loved the pics, thanks for sharing!

This was indeed a brawl of a game.

Thanks Mordian & yes it was!

Rob/Murl's right: that tank is probably one of your all time best!

I have some tankbusta's that I want to get built and battle-ready soon. How have they been working out for you?

The Tankbustas? Well...terribly if I'm honest. That said I did order 3 more of them, as I have next to no anti-tank capability. They ought to have tank hunter of the like, but at least they only have to target vehicles IN RANGE now...