Turns out, you can put a round peg in a square hole...


...ya just gotta square it off first.

Note the svelt meatball shaped physique of the sitting quar in the photo above. I needed two of the rotund little guys to fit into the driver/gunner's compartment of my Warlord Games' universal carrier. That was no easy feat I can assure you, especially the driver's position as its a lot narrower than the gunner's spot!

Short, fat, metal, and with an integrated base, yay. Now largely legless, these two will never walk again (if they're ever removed from this little carrier). The driver meanwhile underwent a um...diet, via a hacksaw whilst being held in place with channellocks. Those were in addition to the snips, x-acto, and hobby saw which had already been used on the two!

In the end though, whilst the literal hack job was a little ugly, it worked and in they went! Then I finished assembly aside from the tracks (which are still removable), primed and began base coating this tiny tank. Hopefully I'll finish it up this week. 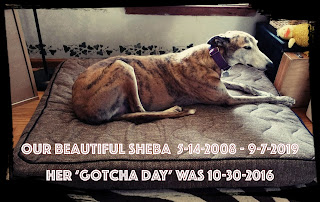 On a sadder note, this past weekend was in a word: heartbreaking. We had to say goodbye to our beloved Sheba. We only had her a little shy of 3 years, and whilst we knew that getting an older dog meant we wouldn't have her long, as it is with so many, cancer took her well before her time. She is already sorely missed. :-(

They're wonderfully gentle dogs and we highly recommend greyhounds to anyone who wants what is essentially an 80lb cat. The link above is for our local greyhound rescue, but if you're interested just google rescues in your area, I'm sure there's one nearby.
Posted by Da Masta Cheef at 5:00 AM

Sorry for your loss brother.