Check out my new Light Saber!! 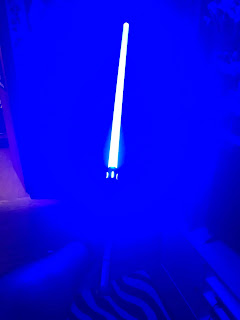 er...well, actually it was a gift for my girlfriend's 11 year old son Frankie. The look on his face Christmas morning when he opened the box was priceless. Sadly, those few minutes of glee are about all the good that came out of this purchase. In hindsight, do your research before buying folks, because I got taken for a ride.

Ultrasabers.com (not linked because you SHOULD NOT BUY ANYTHING FROM THEM!!!) was the only company I knew of that makes light sabers aside from going to a Disney theme park. As such, as I've since read on reddit (a site I normally loathe as I find it difficult to navigate) that I made the 'classic mistake' of making my first saber purchase from Ultrasabers. They're one of the longest running, most heavily marketed, and biggest names out there. 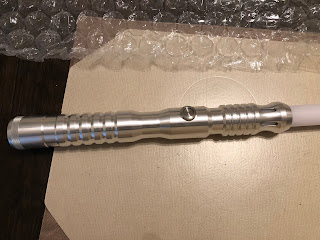 The power button is depressed yet it is unlit, as usual. 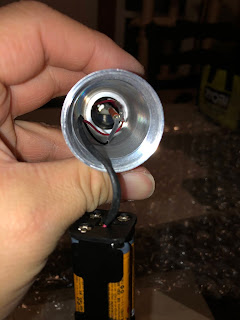 It's really just a glorified flashlight, albeit with faulty wiring. Oh and forget the warranty as there are countless posts about them refusing to honor them.

Years ago, they were one of the best too. A friend of mine has one of their sabers, has had it for about 3 years now and loves it. However after lighting up as it did above, I wrapped the saber up and awaited Christmas (FYI: you can only return your saber within 3 days of arrival, because they're clearly aware of their poor quality). Christmas morning it went out after about 5 minutes of swinging it around, coming into contact with nothing. 5 sets of batteries later (all different brands) and I realized we had a problem. 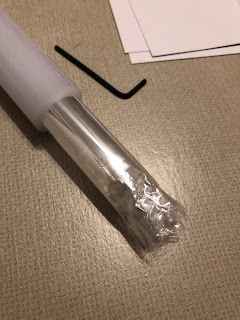 You can remove the blade so as to display just the hilt on a stand (also purchased), however when Frankie took the blade out this silver reflective liner fell out immediately. He tried to get it to back in and it crinkled... 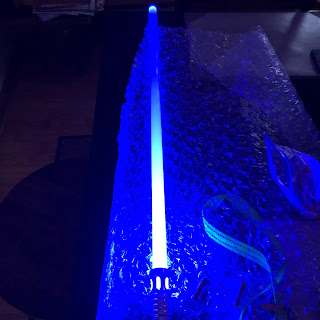 ...and this is what ya get as a result (again, on the rare occasion it'll actually light up). So much for that beautiful glow in the first pic. The blade is clearly designed to be removed, also-don't ever fucking do that!

After 2 weeks of the run around by customer service, I went looking online and found youtube videos, reddit posts, Better Business Bureau rating, reviews and complaints and found that at some point the company took a bad turn and is now pretty much the worst of the worst. I've read a lot of the horror stories this past weekend, and have to say my experience with them is sadly one of the better ones.

My father in-law is more or less a retired electrical engineer (skills-yes, that actual degree-no), so will see if he can fix it as from what I've read, were I to send this piece of junk back, I'd never see it again. Currently I'm researching other makers and will buy Frankie a proper, functioning light saber soon I hope (he's such a great kid, he feels bad for me because I've been so mad about what I thought would be the ultimate present that was instead total garbage).

Don't be like me, do your research before clicking the 'buy' icon! Also, NEVER EVER BY ANYTHING FROM Ultrasabers.com Scumbags.com!!

Sounds like they got greedy, the Company was making a few high quality but demand outstripped what they could do, so they cut corners and now mass produce shit to keep up with demand from yesterday’s laurels.

Yeah, that was my take on it as well.

Will definitely avoid, thanks!

Saberforge is company that I've heard good things about for a nice saber but still relatively cheap. There are a couple more good ones but they're definitely for hard core fans cause they're in the $500 to $600 starting range, so not bothering to list them.

From what I've seen Saberforge is kindova mixed bag. They used to be terrible but have improved greatly here recently. Though getting them to respond to inquiries, issues still needs a lot of improvement from what I've read. WHilst they are an American company which ought to be easier to deal with, so is Ultrasabers so that's not saying much.

Currently ThePachStore is looking really good (they have a 'durability' youtube video that's hilarious as the guy beats the hell out of metal chair with a light saber), or waiting til the end of March for when Sabertrio opens their store back up (if their volume gets too high, they close off sales so as not compromise on quality/service). Both of those are asian companies however both have high marks all around (multiple sites list sabertrio as the best in the world in terms of customer service) and are affordable.

Haven't made any purchases yet though...