With the sudden onset of an actual winter (temperature wise) I figure that I ought to make a post involving some winter troops. I mentioned these a little ways back as a side project for which there is neither a rule set, nor even a background setting (that I know of at least). They're just cool minis consigned to a life on the shelf, and with that, I introduce you to the Grymn, the 'Space Dwarfs' (oh shut up Hive Angel!) produced by Hasselfree Miniatures.


To me they're more like space midgets, or pygmies rather than the stereotypical GW dwarfs or squats (i.e.: they're properly proportioned, actually have visible knees and don't have beards down to their toes)

This particular model is the first to catch my eye as I can't think of any other laptop toting sci-fi minis (the antenna came from an IG vox caster). Thus she's my Grymn's platoon/army commander. Rather than leading from the front, waving a sword in the air and looking all heroic in typical 40k fashion, she hangs back while coordinating from the rear.

I figure that she's receiving data/camera input from her various units, recon drones, and possibly even air/spacecraft, and using such information to issue her orders, call in air/orbital strikes and/or artillery support, and to communicate with other Grymn units. She's armed with an assault rifle (as small as the Grymn are, its more like a sub-machine gun), knife and all of the other wargear of the typical Grymn soldier. That said, I doubt she'd be using it for anything other than self-defense in the event that the battle takes a turn for the worst. Most likely because her laptop failed to reboot in time... 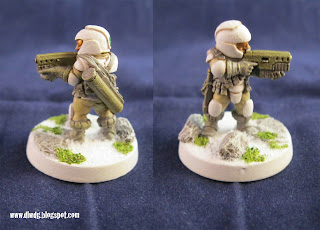 The first squad of these that I ordered (along with the Commander mini) were listed as an anti-tank squad. I couldn't figure out why just by looking at the squad sets (I hadn't looked at the minis' individual listings) and so didn't realize that they each had a LAW strapped to their backs.  In the second batch I ordered, I got the Grymn with the power axe, figuring he'd be a good Sgt. for them. In say, a boarding action, they could be breaching charges (and a boarding axe) while on the ground they'd be light ant-tank weapons. With the extra gear, they're more of an elite unit I figure, plus they still have the standard weaponry of the regular troops.

As you can see, they're quite tiny compared to 'normal' 28mm minis. I don't really think there's any place for them in a 40k army, other than perhaps some IG vets. So long as no one minds them having the stat line of a bunch of ratlings armed with shotguns (closest thing to a submachine gun rules wise).

There's still hand full of them that I'd like to get, and possibly even the walker model that they have, but that's about it. There's no need to go investing heavily in something who's only battles will be against the Quar for the premium spaces on the shelf.
Posted by Da Masta Cheef at 10:06 AM

Very cool! I've oft been tempted by the Grymn, not that I need more miniatures, but they do seem really cool. I dig what you've done with 'em!

Thank you sir, however that's no excuse! I'm overloaded to the point of having the non-played-with minis fighting for room on the shelf!

...get a bigger shelf? Ironic considering the size of these things...LOL

lol. As you know, i do have more than one, I just prefer those that are closer to eye level & tend to forget what's on the lower ones.

The last picture I invision in a battle where Tyranids are within assault range, the scout sniper pulls up his rifle and kicks the smaller guy out the window and smiles.

lol, know my scouts, he'd miss & fall out the window himself!