Yup, that photo just about sums this post up especially as the water's even green, lol!

Going way back in the the grim dark of my gaming history, back in 2nd ed. 40k, where the IG was still working from the 'Black Codex' as the Imperial army, I bought a predator tank. The Leman Russ had been released at that point, however I didn't have the rules for it, though I did have rules for the predator in the IG list. Here is that tank:

That is the first GW model I ever bought! As such this model is more or less responsible for my life long financial ruin which has been spawned by this miniature addiction. There are layers upon layers of paint on that tank (no doubt with plenty of painted over dust as well) as we didn't know how to strip models way back then. As my first model, this tank also dates back to my 40k upbringing as a WAAC player, indeed that disgusting residue has likewise been painted over.

Going from memory, I have no recollection of just when it acquired the 2nd gen. pred. sponsons or the additional frontal armor, however its many layers of paint are layered as such:

1) The original 2-tone camouflage of olive drab and light olive drab of the Imperial Army/early IG.

2) The over that a crude white wash  for the Ice Warriors of Valhalla that looked kinda bad and elicited incessant 'those damned seagulls' comments from my opponents (yes I was still living in Florida).

3) Then all black with boltgun metal trim as I once read that the Adeptus Arbites were equipped to fight a small war on their own, and with about 30 or so Arbites in my collection, they did just that.

4) It stayed like that for years till it fell to Chaos and was dry brushed over with boltgun metal (most of which is still visible) for the Iron Warriors.

5) The 'final' painting update which you see above where some of the chaosy bitz were removed, and the front of the tank and a few other accenting parts were painted Regal blue of the Silver Skulls.

This tank (and another like it) were used in conjunction with some old Space Hulk termies and a bunch of other old minis at an Atlanta GD GT one year. The first round of that tourney they fought a memorable knock-down, drag-out, slugfest with a Necron army that won best painted army that year.  I still have the printed 'brochure' of that guy's army list.

During that GT, they earned two moments of memorable amusement (glory? not so much...). The first being the look of horror from the GW painting judge when I asked him when he'd last seen minis so old at the GT, and the second when two kids asked what I had used to convert my predator turrets. lol, they were shocked to hear that they were original turrets, and the guy next to me commented: 'that's because those tanks are as old as you two are!'

Anyways, with the Silver Skulls' demise some years back, the Predator has been in retirement ever since, aside from occasional training missions with other fledgling Marine armies. Doesn't make sense to have a perfectly good predator sit unused in a drawer. I say that, yet there's the exception to that rule being my Dark Hands Predator (from another sold off army). It won an honorable mention at a Atlanta GD one year and appeared on the GW website for a year or so. That's the closest I ever came to winning a painting award. 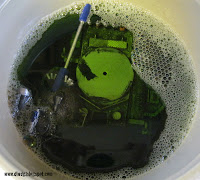 As such, after snapping the few photos above for nostalgia purposes (and this post), the old beast was sunk in some simple green. It'll rest in there for a bit, and then be fully stripped and repainted. Both my Dark Angels and Storm Wardens are at this point made almost entirely of 2nd ed minis, so it would fit in well with either of them. Though, if the DA get it there will be some irony, as this tank started its career fighting them for about a year or so straight!
Posted by Da Masta Cheef at 8:54 AM

My two second edition predator and the whirlwind could find a home in your new army.

That tank has a long and illustrious history. I wonder if any single gaming model has seen so much action.

I'm also curious about the Necron player's brochure. What did he have in it?

I'll scan it in tomorrow & email it to you, it was full color, really kind of amazing for an army list.

Well, as venerable as the predator currently is, it'll get a whole new lease on life here in the next few weeks.

Nice! I prefer this version of the predators over all other incarnations.

Post a pic of that brochure to the blog!!!