Automated vending machines are nothing unusual on the world of Utaupia, however the failed Intergalactic Taco Corporation's free-roaming 'Tacobots' are the most notorious. Originally used in urban areas Tacobots were programed to have specific territories like any salesman of old. Blaring Mariachi music, they would offer pedestrians and other passers by what was marketed as 'a tasty and authentic Mexican treat!'

With their parent company concerned more with low cost and longevity of the food products carried by the bots than they were with taste, Tacobots were quickly dubbed diarrhea with legs by their detractors (of which there were many), and sales fell sharply. A more aggressive sales software package was installed giving a sharp rise in complaints rather than sales.

Tales of frightened children cornered at community playgrounds, and harried elderly and handicapped citizens (who were too slow to outpace the infernal machines) assailed Intergalactic Taco from around the planet! PR execs complained of malware until an internal whistleblower revealed the truth and the Tacobots were banned from all municipalities by the Utaupian government!

With executives desperate to save their stock portfolios, the Tacobots were fitted with limited sensor suites able to detect machinery, stocked with even longer shelf life (and less appetizing) foods, and deployed around the wilds of Utaupia. A new marketing campaign told of how wayward travelers, and famished frontier peoples would joyously greet these rugged new Tacobots! When their wares were all sold out or expired (according to the holo-vid commercials...), the Tacobot would send out a recall signal and be retrieved by aerial drone for a refit and restock.

The plan was a dismal failure.

Instead Tacobots were seen to be futilely trying to flag down passenger and cargo trains speeding by at hundreds of kilometers per hour, or doggedly pursuing automated farming equipment. The most comedic report came from a military exercise, in which a Tacobot came upon a mock military battle, with incredulous officers staring dumbfounded from their forward command post as they witnessed their units waging war with a Mariachi soundtrack!

The company quickly folded and the Tacobots were never retrieved. Whilst tales persist of lone Tacobots still plying the wilderness with their long expired foods, most are spotted only as rare and forlorn, rusted figures dotting the roadsides and railways of the Utaupian wilderness. 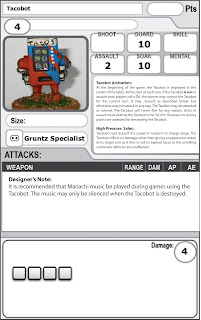 Is this why you won't eat Mexican food?

I am totally craving Taco Bell now. Thanks.

Is the main reason reason for driving a dodgy ram ? Just to shove these out of the way ?