My Rogue Stars' version of the A-Team!

Okay yes, I'm of that generation that grew up watching the A-Team and I loved the show...well, for awhile anyways. Sadly even as a kid the episodes got terribly repetitive, and all of the show's flaws became readily apparent. Recently Wolfy and I watched the A-Team on Hulu and the show has aged really poorly.

That said, I wanted to make a Rogue Stars crew based on the A-Team using some of my leftover Grymn who don't fit into my Outremar army, called the G-Team.  Needing 5 members, I opted to use the awful 5th season add-on to the cast: Frankie "Dishpan' Sanchez (scroll down to the last of the 'additional characters').


The G-Team was a small (no pun intended), uniquely skilled band of fugitives who fought as mercenaries for the oppressed. They were most famously known for their improvisational antics, which…after a time became mind-numbingly repetitive to anyone who followed their exploits closely. Despite their painfully obvious predictability (something their governmental pursuers curiously never picked up on), they held the public's attention for a few years before disappearing into obscurity…

The following were G-Team's members:

The mastermind behind the G-Team, Hanibull lead the G-Team throughout its lifespan. Whilst his repertoire of ideas was (terribly) limited, he was nonetheless a master of surveillance, strategery and disguise. At their mission's end, Hanibull was oft quoted as saying he: 'loves it when a plan comes together!' 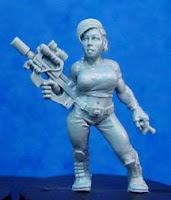 The G-Team's logistical specialist, Fayce used flirtation and her good looks to prise whatever was needed away from those who had it (ironically, her best 'assets' didn't include her face). Though rarely required, if something proved unattainable despite her wiles and charm, she always had her SMG ready to close the deal!

Never without her trademark leather jacket, Myr'dok served as the G-Team's somewhat mentally unstable medic. She made a hobby out of slipping narcotics of various types into B.A.'s food in hopes that hilarity would ensue! However due to frequent overdosage, the big guy passed out more often than anything else. 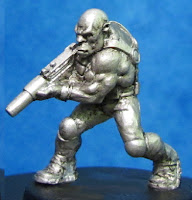 The only non-Grymn member of the G-Team, B'Ruckus (a half-Ork) fulfilled their need for brute strength and intimidation. However, B'Ruckus' preference for red T-shirts, camouflage and vast amounts of gold jewelry (often all worn together!) left many to wonder if he was really a threat, or just there for comedic effect. Poor fashion choices aside, his short temper and considerable attitude, made him a force to be reckoned with! 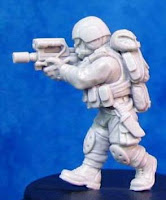 Crankie is the final and truly forgettable member of the G-Team. In a last gasp of desperation to extend their failing notoriety, Crankie was coerced into joining the G-Team. Unfortunately for him, he signed on at a point in which the rest were all well past their prime. Supposedly an expert in pyrotechnics, the only significant thing he ever managed to destroy was his own career, which subsequently went down in flames.

*All images copyright of Hasslefree miniatures.
Posted by Da Masta Cheef at 5:00 AM