The Children of Torment 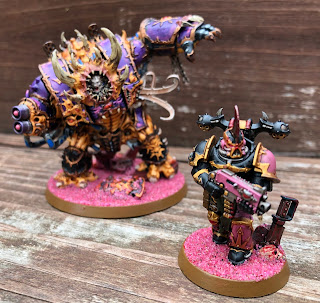 In and amongst the experimentations on my Hounds of Demos, principally whilst waiting for the various layers of wash and/ or the contrast paint itself to dry, I was adding in some base coats and blocking out the colors on a squad of *my* new Chaos Space Marine force: The Children of Torment.

They quietly amassed in number yet were pushed aside while I finished up my Silver Drakes. They along with my preexisting squad of cultists clock in at approximately 500 points. That's probably the limit of my attention span for a new army and in all likelihood well beyond my want to actually paint all of it! However this small force isn't actually for me, but rather My Beloved Wolfy.

Now it is true that her Fem Fa'Tau have been hidden away in storage for what seems like years now, and she has shown no want to play 40k (or anything else here recently) either. However when I tired of my old Chaos Space Marine army and sold it off (seriously, their color scheme was a nightmare), she was quite upset that I had sold her army without even asking her permission to do so!

The first army she ever used in learning to play 40k were my chaos marines. Well, when things became serious in our relationship, the old adage of 'what's hers is hers and what's mine is hers' was instituted without my knowledge...apparently. So the Fem Fa'Tau aside, she's (quote) always had a soft spot for chaos which was my first army (end quote).


We had talked of buying the Shadowspear boxed set and splitting it, but at the time of its release funds were not available and real life had us busy with 'it' instead. Still, I kept her love of Chaos in the back of my mind and a little ways back started amassing this little army for her use. Hey! I can use it too!

My first purchase was actually a $34 Helbrute purchased on eBay pre-painted and only in need of basing. A few minor assembly issues aside (only really noticeable if you're looking for em), it was painted on par with, if not surpassing my own painting skills. So well done to whomever actually painted this beast!

I did swap out the multi-melta (a mediocre weapon) for a missile launcher (also a mediocre weapon, albeit one with twice the range). For it's secondary weapon I have it equipped with a heavy flamer which fires (literally, lol) out of the maw in the palm of it's fist.

To date, aside from complimenting my painting of that lone chaos marine and the basing of the Helbrute, she has yet to show any real interest in  this army. That said, she's well aware that they are 'hers' and thus they'll all likely get painted (someday) as selling 'em is certainly out of the question!
Posted by Da Masta Cheef at 5:00 AM

lol, well those miserable curs are rarely seen, instead they remain hidden away in their mountain dens like a bunch of suckling pups.