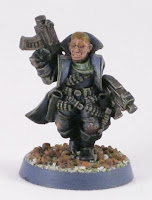 I missed out on our group's last Dark Heresy night (nor did I make any quantifiable painting progress) as I was getting ready to make a weekend run to South Carolina. However after my Character Boris' success in tidying up our team's mission, and getting everyone back on board our ship in orbit for the long return trip home, we're now going to use our original DH characters for a bit. Which is fine, as playing the role of a sociopathic, megalomaniacle, and quite deluded madman can be a bit tiring and a break was needed for me.

My original character Yoseph was never intended (by me) to survive his first adventure as he was a more or less the 2 dimensional training wheels type. A simple 'point & shoot' kind of guy, while I learned the game. He did survive however, and as our new mission is on a hive world, Yoseph has been put in charge! (grins maniacally). Besides the players of our prior team leaders are either burnt out or (in the latter case) incompetent (whether or not I'll be any better remains to be seen).

In talking with our token guardsman the other night, I commented that with me in charge, their lives were forfeit! Assets to be exploited and discarded at my leisure. He took offense to his new reality, so he shall be the first to go!

"Now get up there in front and take that bullet for me bitch!"

Sigh, sorry but that would be Boris talking there actually (were he ever officially put in charge). When compared to Boris, Yoseph is a rather nice guy (nice for a scum anyways).

Previously I had used one of the plastic Orlock juve models with an added shotgun on his back. However with 6 months back pay to spend, as well as money from selling off his old & scavenged gear (just where or when he acquired a vox-caster is beyond my recollection), I reequipped Yoseph and switched to the (oh so appropriate) Necromundan scum model pictured @ left & above. My rolls for finding items were all pretty much good (one roll for each item barring his pistols which required the used of my 'daily reroll'). The now reequipped Yoseph has a Flak coat, two hand cannons with silencers (so they're not quite the bolt pistols on the mini, but they still pack quite a punch), plenty of ammo, his trusty ol' knife, a multi-key (every scum should have one) and the requisite flask of Rotgut booze.

I'm not really sure as to what's in store for inquisitorial team Gamma this coming Friday, however I can assure all of you that Yoseph will expend as many of the other team member's lives as is necessary to accomplish his mission!

Thought for the day: The ends justify the means.
Posted by Da Masta Cheef at 9:25 AM

Hey, no one ever said being a minion would be easy, right? It sounds like switching up characters will offer a nice change of pace for you. Cool mini, too!

lol, as a previous minion (with a bomb collar strapped around my neck the whole time) I can't figure out how Boris didn't get killed!

Thanks man! Btw I thought of you last weekend as I passed by the Weaverville exit signs.