My first trip to a GW store.

As I said in my prior post, the mega tank went quicker than I thought & I had to go & buy something else to paint while in Florida. As it turns out, a brand new GW store opened up approximately a half mile from my old apartment (not that I'd be able to walk there were I still in my old apartment as it would require crossing an obscene number of lanes of traffic that are continually populated by Florida's insane drivers).

Anyways, in all of my years of gaming, there's never been a brick & mortar GW store within a 5 hour drive of me, so this was my first trip to one. I was hoping for the novelty of the hyper-aggressive 'red shirt' to pounce as I walked in so I could inquire about Squats (I hear that they have a standard response for that). However other than a 'Hello & welcome to games workshop' by a guy in a BLACK shirt, he was rather friendly instead of the stereotype. Which, was oddly disappointing.

Anyways, the selection was good (barring absolutely NO specialist games stuff, WTF?), 3 RoB tables to play on (sparse terrain by my standards, though they were desert tables), a nicely painted RoB demo table, the WHFB demo armies looked pretty good, the 40k demo armies (as well as those in the mini cases) were kinda basic in their paint schemes though. Another case had some really nice stuff in it along with various player names, I presumed them to be on display for a contest, or something.

So despite having been in the mood to buy something of the specialist sort, I had to settle for an Inquisitor Coteaz & an imperial bastion which will be split with Neverness (so I can make a low bastion, whereas his will be a veritable tower).

Coteaz was also painted easily enough, but took just enough of my remaining free time to fill out the rest of the week. I skipped his standard gold armor instead going for minty green. The storm troopers & hangers-on that he runs around with are in predominantly bolt gun metal, shadow gray & scaly green. So he ought to blend well with them while still standing out (assuming he ever gets out of his Chimera which which to date is only 50% of the time). As for the bastion, I haven't opened that box yet, as I've been working on my new Mordheim Warband. I'm using the Reikland list with a Stirland theme. But I'll save that for later in the week I suppose...
Posted by Da Masta Cheef at 9:09 AM 5 comments: 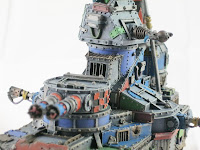 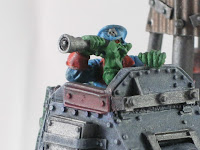 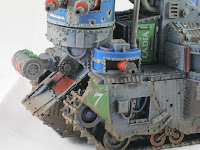 One change I made was to the boom canister. It's listed as having two, one to each side. However the kit has just one. Plus mounting it on either side would hide some of the nice little bits & bobs that it's covered in. Whereas under the aft turret there was a large space for additional exhaust pipes. So I mounted it there instead. Rather than being a depth charge like it so obviously resembles, I think of it as an anti-Space Wolf scout device. I also need to point out (if only for Neverness' sake) that da kommunikashunz mast is equipped with 'Bloo Toof Teknology'
Posted by Da Masta Cheef at 9:33 AM 5 comments: