Kushial and I finally were able to get our all tank Battletech game in after I had to cancel on him some ways back. He was running his fully painted, Federated Suns Caselton Militia, and his force consisted of:

All were base variants with standard 4/5 (Gunnery/Piloting) crews.

I was playing the 'bad guys' aka: the Fucking Wobblies, of which none were painted. I had a Level II consisting of:


I had advanced technology vs. his tried and true preference of overwhelming brute force! Things started off well for me with the behemoth dropping 2 of his tanks in as many turns. That said it missed partaking in the middle point of the battle due to being (1), bereft of targets and (2) mud-fucking-slow!

Meanwhile, there was armored clusterfuck at knife fighting range on the other side of the table, in which I saw my Manticores all go up in flames. His force didn't fare too much better, and by game's end all I had left was a badly beaten up Behemoth (with only 1 point of armor left on it's turret) vs. an equally chewed up Saladin and a moderately damaged Alacorn.

With that, my Wobblies raised the white flag and in typical fashion, they summarily nuked the planet from orbit.


Sorry, there weren't too many pics and of those that were taken, most were badly out of focus. Despite my defeat, we both thoroughly enjoyed ourselves, and I'm sure we'd both be up for this kind of game again in the future.
Posted by Da Masta Cheef at 5:00 AM 7 comments:

So, whilst rooting around in the spare room in a desperate search for the snow flock (that I haven't used in years) for Kushial's Leviathan's base, I found a few bedraggled survivors from several of my old Imperial Guard armies. I haven't fielded the IG since...well, they were actually called the Imperial Guard.

I knew I still had the Commissar...somewhere, but the rest: no.


The green and brown guardsmen are lead by Sgt. R'Kansas and his huge double-barreled shotgun. They're the sole survivors from my old 110th Ryza Pioneers army. The Heavy Bolter gunner is from an older, urban warfare/Military Police themed (if I recall correctly), all metal Cadian army. Honetly I don't recall much about that force.


Then there's the Catachan Lt.. This has always been one of my favorite minis. In fact, I saw it painted on someone else's blog recently, and was wondering just why I'd sold it. Especially as it often goes for $15-$20+ on ebay. Thus, I was happily surprised to find that not only do I still have this mini, but he even has a pet dog! No idea when/where that bit came from, but it's staying regardless.


And then...we have the Venerable Commissar Borg. His name, 'Commissar Borg' came from one of those little blue army brochure/pamphlets that could be found in the 40k section of the game shop back in the days of 2nd edition. Somebody added 'The Venerable' to it at some point (I forget who) due to the mini's age, and he's been known as that ever since. This is the first Imperial Guard mini I've ever bought! He's been painted and 'armed' several times over the years, and has executed Guardsmen in every IG army I've ever had. Yes, he's sometimes killed enemy models too.

Now that I know that I have them again, I guess they'll be commandeered by the Inquisitorial Kill Team. Not sure if any will get repainted any time soon, but they may eventually.
Posted by Da Masta Cheef at 5:00 AM 3 comments:


Whew! This beastie was a lot more work than I thought it'd be! For those of you that don't recall (which is to say most everyone as I've been milking this for quite some time), I painted this for Kushial in exchange for a lance of Battletech Manticore tanks.


As you can see, its come a long way from when I first came into possession of it, but I'm hoping he likes it. As a bonus, I added two little deployment badges Lion decals to his Contemptor which has served as the 'painting guide' for the leviathan.

I'll pass this back to Kushial this coming Saturday, meaning all he needs now is to find the 8th ed rules for this monstrosity, as well to hope for some sort of celestial alignment to take place in order for he and Neverness to convene in the same location for this to make it's battlefield debut!
Posted by Da Masta Cheef at 5:00 AM 5 comments:

Just a quick post as its Valentine's Day, the Mrs. is on her way home from work, and in the mind of the average wife (luckily mine's not average), today isn't a hobbying day. Not going to test that theory though just in case, lol.


Anyways to the point: I finished my Ghar Battlesuit commander!


I'm really pleased with how this turned out, and...if anything, whilst I may not remember the rules as of right now, I'll at least have a worthy commander to lead my troops into oblivion once I manage to get in a demo game.
Posted by Da Masta Cheef at 5:00 AM 1 comment:

Rainy weekends are good for painting...

...that said, you'd think I'd have been smart enough to take pics of my progress before inking the mini. Right?


Anyways...here is my Rebel Ghar battlesuit commander, perched precariously amonst the deitrus of my hobby space (due to not being glued to his base). Ooh the base! I can take a pic of that at least!


Oh well, I did ink Kushial's leviathan at least. It took forever to dry, hence my work on the Ghar suit. It doesn't however look too different from before as I didn't go as heavy on the inking as I so often do on my minis. So, no pic as of yet. Its coming along though. The next step for both the ghar suit and the dread is the dry brushing/dirtying up phase which is easily my favorite part of painting minis.
Posted by Da Masta Cheef at 5:00 AM 2 comments:

The Leviathan now has decals!!

But there's not much else to report sadly. These aren't from Fighting Piranha Graphics. I got tired of waiting for a response from their art guy and uh yeah, they took this month off too. Thus, these aren't fully custom but work nicely none the less.

Hopefully I'll get this inked and dirtied up, hell, possibly even finished (don't hold your breath) for my next post...but we'll see.
Posted by Da Masta Cheef at 5:00 AM 3 comments:

The flesh is weak.

I managed to get in a bit of brush time this weekend and finished up my first Blackshield for 30k. Originally intended to be an Iron Hand, I realized that I didn't have any Iron Hands decals. Ah yes, now I remember (from way back when I had an Iron Hands army about 10+ years ago), that as the red-headed stepchild chapter/legion, decals simply don't exist aside from Forgeworld's single offering.

However I have a few sheets of Fallout Hobbies' 'evil machine cult' decals and they work perfectly! Thus, instead of a conglomeration of Istvaan survivors, I'm going with similar (but different) the Blackshields theme for my army. My Salamanders dreadnought already has some of these decals on it as well, so it'll tie in nicely. As for the three painted Salamander marines that I have, I'll leave them as is. No sense in changing anything given how much else I already have still to paint. 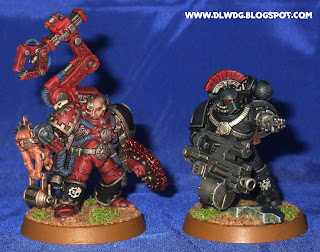 Additionally, I tweaked the paint on my Techmarine-turned-Forgelord for what seems like the umpteenth time. That, along with the addition of one of the machine cult decals, help to tie him into the army.
Posted by Da Masta Cheef at 5:00 AM 3 comments:

Not much paintin' but some buildin' at least...


Rather than (*try to*) paint a horde of 30k Salamaders, get bored, and sell 'em off ala my 30k Alpha Legion army, I decided to mix it up a bit and just do a horde of loyalist Istvaan survivors. WHICH...adds in the option of very...colorful...black...armor. Maybe I'll add in some black shields who've renounced their colors and are painted as ANGRY MAHREENZ!! in black (again? seriously?).

Anyways, I (literally) 're-armed' my flamer tactical support squad with bolters and then added a bunch of battlefield debris to their bases, and that of several others totaling 12 marines. These will (very shortly) be primed black since its warm today, unlike yesterday and the rest of the week.


My Ghar rebel commander finally finished doggy-paddling its way across the Atlantic, and I assembled that as well and will also be priming that alongside the marines above. Being a metal/plastic hybrid, its a woefully top-heavy model. Luckily my earlier decision to add a bunch of rocks to my Ghar's bases offsets this somewhat, though I'll still have to be careful when fielding it.