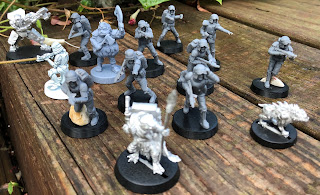 My recent arrivals: Imperial Mud Troopers, a single Republic Clone, a lone Gamorrean, and a smattering of minis from Diehard Miniatures.

Ah yes, its that time of the year again. The annually occurring bout of me buying all kinds of random minis in under the premise of: I want it! Usually, this spending spree is centered around all things 40k. This year however, not so much.

Or rather, not at all.

I'm kinda over 40k to be honest, with even the impending onslaught of new Ork releases failing to catch my fancy. I did put my name down on the list in one of the local FLGS's for the new Kill Team boxed set.

However GW's inevitable supply scam shortages, means they likely won't get enouh for everybody who wanted one. That coupled with the apparent need to buy an additional $50 book for the full set of rules means that I think I'll take a pass on that as well.

Besides, Battletech and X-wing are really the only games that I play these days anyways, and even those two are sporadic at best. Instead I seem to have crossed the line into primarily a mini painter, rather than a gamer. 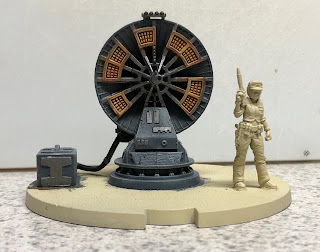 The majority of my recent purchases you might have noted, have been for Star Wars Legion; a game that I'm still not keen to learn to play. I sure like the (mostly 3D printed) minis though. My small (250pts +/-) of Rebels is almost complete with just the pizza cannon above remaining to be finished.

Opposing them will be the Mud troopers pictured t the top, as well as an occupier assault tank (I'm sure half of the folks who follow that link will be too distracted to return, but whatever) though I have yet to purchase that model. They'll clock in at about 300pts or so (I think), not that it really matters.

I've also purchased more tanks for Battletech (who will get their own post on my TBAGers blog), as well as minis for a probably stupid revisitation to both the Beyond the Gates of Antares and Heavy Gear game systems. Oh I'll probably paint 'em up, not holding my breath for any actual gaming.

Also I'm currently reading the book Ghost Riders, meaning my (unrelated to that theater) Bolt Action army may again see a ray of hope of reentering the painting queue

Oh don't worry Neverness, I haven't opened the eBay 40k flood gates yet. Selling off vast swathes of my 40k forces, painted and otherwise. Though I can't say that the idea isn't under any consideration... 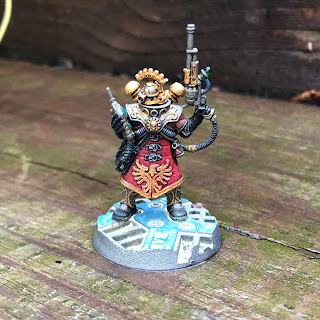 The Ordo Mechanimun is a little known Ordo that works closely with the Explorators of the Adeptus Mechanicus and the much larger Inquisitonal branch of the Ordo Xenos. Principally, they are tasked with confiscating recovered Xenos weapons lest they fall into the wrong hands (i.e.: anyone's other than their own). 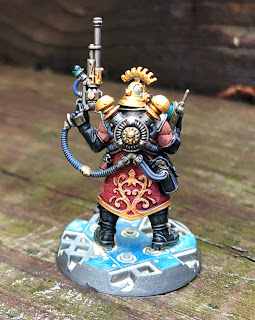 I had to trim down those ridiculously oversized power...uh, thingies. 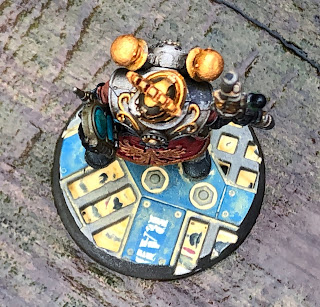 The dust caked, desert looking base is in stark contrast to my deck which was recently subjected to an east Tennessee deluge!

The Mechanum Inquisitors tend to not be as heavily augmented with cybernetic and bionic implants as the upper ranks of the Mechanicus Magi are, though few if any are totally human themselves. This particular Inquisitor for example looks for all intents and purposes to be a standard human. However you'd be mad to think that the power pack he wears is purely for his weapon, armor and research equipment. 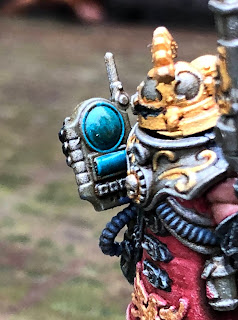 Ack! No icons can mean only one thing:
It's the dreaded blue screens of death!

MS-D05 doesn't appear to be equipped for melee combat...though one never knows what potential close combat upgrades may be simply concealed rather than easily visible. That said, even an unarmed Inquisitor can easily hold his own in hand-to-hand combat if needs be. 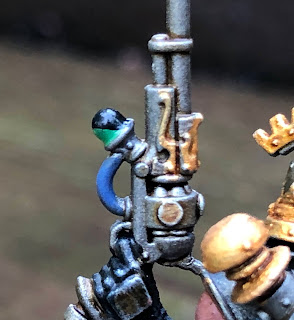 I'm rather pleased with how his ammo vial came out.

For ranged combat he is armed with a needle pistol. As MS-D05 is someone who holds to the creed of The flesh is weak, the notion of his adversaries agonizingly dying in a virulent hell that he himself has inflicted upon them (and one that his own metabolic systems would easily filter out within moments) is probably just a sadistic bit of irony. 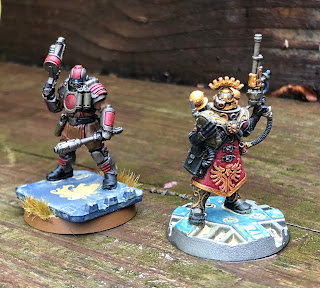 Inquisitors McClellan and MS-D05.
Both pointedly ignoring one another...

So there you have it: my two contributions to this year's Inquisitorial Conclave. My thanks again to Neverness for creating this event that puts a gun to my head motivates me to chip away at my infinite backlog of minis. 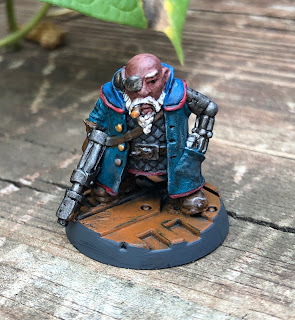 I based him the same as Dev0504, meaning they'll both likely fight alongside one another in Stargrave at some point.

Teague grew up the child of diplomats, spending his childhood traveling the galaxy. Honestly, his early years were the envy of most children I would imagine (and that's excluding the fact that most Squat children were devoured by the Nids). He had an eye for the worlds his family visited and took to pict recorders naturally. He easily ought to have been famous the galaxy over, but wasn't by personal choice.

Despite being an abhuman, he was accepted for and contented himself with a menial and meagerly pict recorder position within the Imperial Propagandus division of the Administratum. His lack of personal drive was baffling to most, even those close to him. Like all squats, he had a taste for heavy drink, though his was rumored to be excessive even by a Squat's standard.

Often his superiors would submit his picts for award consideration, with frequent wins and most of the resultant bonuses going to those above him. Honestly, Teague couldn't be bothered to even care. He soldiered on quietly, mindlessly. Rather than reap the rewards of his minimal though still spectacular picts, he instead chose to live in his once decent but soon dilapidated and trash filled, mid-spire hab.

After a century or so of dutiful (and in his opinion) effortless work for the Propagandus, Teague reconnected with an old love from his youth and chose to suddenly retire and move onto a happy retirement on a distant world.

Within days of his departure, that dream was shattered. Details are few, it is believed that his personal daemons (liquid and otherwise) which probably lead to his lack of drive in life came to a head, and his love cast him off. 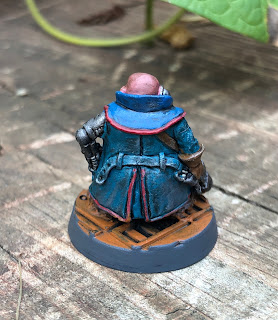 Walking off into the unknown...

He sold all of his pict recorders, claiming 'that wasn't him anymore'. He sobered himself up (no mean feat for even a modestly drinking Squat), tried in vain to clean up his hab before selling it all, and along with a not to insubstantial inheritance, he purchased what is officially a small Chartist vessel, but would be better described as a curiously warp capable garbage scow.

Teague chose to end his days in the difficult, dirty and dangerous work of a lowly Chartist captain (as is evidenced by his bionic arm after losing his own in an industrial accident aboard his own ship). His vessel, the Knuckledragger departed with without fanfare and for points unknown. Sadly, Teague and the Knuckledragger haven't been heard from since.

Originally, Captain Teague was going to be the Rogue Trader-esque captain who hauled Inquisitor McClellan around the galaxy as like said inquisitor, Teague is also based off of someone I once knew. I only met him once, though he was a decades long RPGing friend and acquaintance of My Beloved Wolfy.

Since he deactivated his Facebook account sometime last year, I have no idea where he is. Though presumably (due to a lack of funds) he's still locally punishing himself with his chosen physically demanding, minimum wage jobs in lieu of his gifted photography. Hopefully the remodeling of his woefully neglected home is coming along as well.

Rather than get any deeper into Teague's personal demise, I'll instead leave you with his 'parting shot' that ended his decades long career at our little local newspaper.

The above mini came from Uscarl Miniatures. 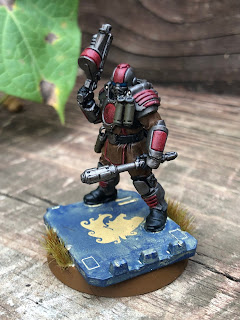 Damn it's only the ninth...I may have to paint up another Inquisitor for the Conclave or something. 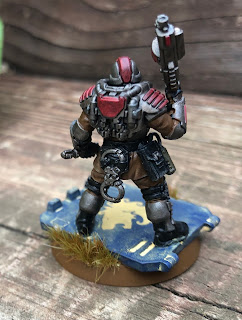 No, those manacles are definitely not of the fur-lined variety.

Honestly this guy painted up rather quick and easily. Whilst he's bereft of any actual markings-Inquisitorial or otherwise, the colors of his uniform and armor match no known Arbite or Enforcer unit. Not that anybody who sees this schmuck coming will be asking him for his papers... 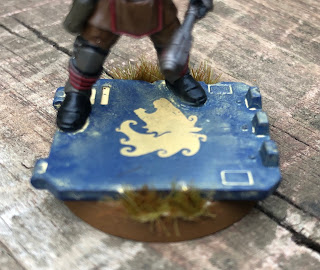 See? I told you this guy was a dick.
He appears to have been active during the 3rd War for Armageddon, as he's seen here standing atop a dust-caked door, from a (presumably destroyed) Rhino of the Celestial Lions. Knowing that this inquisitor may have had a hand in the attempted destruction of that loyalist chapter only adds to his infamy.

hu·bris
/ˈ(h)yo͞obrəs/
Learn to pronounce
noun
Neverness' Inquisitorial Enclave for 2021 is now on, feel free to join!
Indeed, that sums him up nicely. Hubris McClellan is a fairly young inquisitor, yet has already garnered a rather nasty reputation for himself amongst his more senior brethren. Whilst he may be effective in executing his assigned tasks, he unfortunately requires considerable oversight when doing so lest he 'go off the rails' after which disaster invariably ensues. 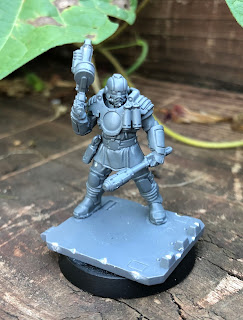 The humble bolter is the least effective ranged weapon an inquisitor can wield. That said, most average heretics will still go splat when the bolt rounds connect. If they don't...well, that's where the power maul comes into play. 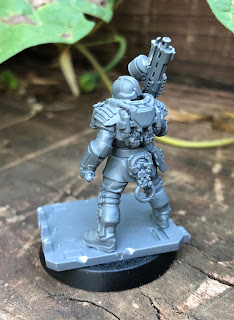 Assuming said heretics aren't killed during capture, then his manacles will take the unfortunate wretch into this schmuck's custody. 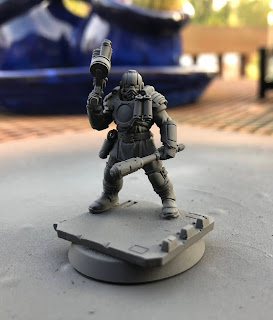 His first color has been applied, panzer grey primer!
Additionally, and according to the other inquisitors with whom he's partnered, Hubris is difficult to work with, arrogant, and all to often suffers from delusions and grandeur, frequently speaking down to his superiors as if they were well beneath him. Thus far he's lucky he hasn't been shot by his own Ordo...
...and why yes, he is in fact based on an asshole I used* to work with, meaning I'll cheer right alongside my opponent when this fucker dies in battle. To date he's only seen combat once and survived the engagement. The battle itself was lost, though I'm quite sure that Inquisitor McClellan laid the blame at his allies' feet rather than taking any responsibility himself.
I haven't decided on just what chapter icon will adorn that rhino door he's standing on, yet...
*Pro tip: When you get written up for gross insubordination, don't login to your company's payroll app and give yourself two days vacation (amounting to a 4-day weekend) without bothering to tell anybody about it. Dumb shit like that equals immediate termination when you show up to work the next week. Fucking idiot.
Posted by Da Masta Cheef at 5:00 AM 3 comments: