...and just in the nick of time! Truth be told I didn't think I'd have the time, but in the end I did what any responsible 40-something would do, I put aside adulting for a few hours and instead said:  fuck it, I want to paint my miniatures!

And promptly did so.

lol, anyways...I'm really happy with how it turned out. Technically, this still needs another coat of matte varnish followed by 'ard coat over the eyes, tongue and entrails that are hanging out of the trunk. However its raining and with 100% humidity outside, and I don't want to risk the varnish fogging, so that part can wait till this front passes thru in a couple of days.

Anyways, here are the completed pics: 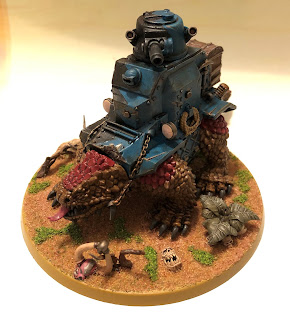 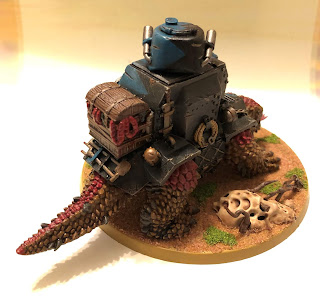 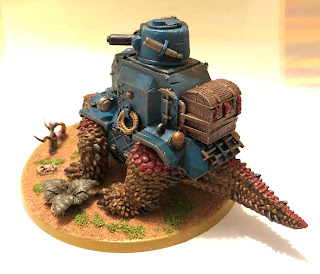 Thanks again to Mordian7th for organizing another successful Dreadtober!
Posted by Da Masta Cheef at 9:04 PM 5 comments:

Yeah its been an awful month. However Saturday I was finally able to get some hobbying in and tried to make up some lost time on my baby squiggoth. That way, when the weekly round up posts you won't be seeing my prior post (again) for the what....3rd? or is it 4th time?

Anyways, I'll just show my latest WIP pics and then get back to it as I have less than a week to finish this project all up! 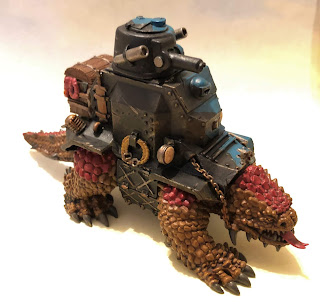 Just a quick post for an equally short amount of hobby time this week. I managed to steal and just  about an hour or so this afternoon to at least try and achieve some sort of minimal progress on my baby squiggoth for Dreadtober. Honestly, its the only hobby time I've had all week, and the next isn't looking any better at the moment.

Nonetheless, the baby squiggoth has achieved the infamous 3-color minimum. I like the base idea for the blue/black hull, though it needs a bit more refinement. It doesn't have to be perfect though since as I've mentioned before, it is the Orks we're dealing with here.

Am hoping I can get more done this week, otherwise it'll just be a late month crunch-time run I guess.
Posted by Da Masta Cheef at 3:04 PM 4 comments:


It was a pretty busy week, however I did manage to get the turret situated, meaning it now swivels freely. It was a bit laborious sawing off the insert that went into the hull with a little hobby saw. I did end up with one gouge due to getting a bit crooked in my sawing, but I caught the issue before it got too bad.

Still lacking green stuff, I instead just cut a few small squares of plasti-card to fit the square in the hull (where said insert had gone previously), and then glued 'em in, one atop the next until they sat flush with the top of the hull. Once dry I made an 'X' to find the center and drilled in an 1/8" hole to fit a magnet. Likewise I did the same with the bottom of the turret. 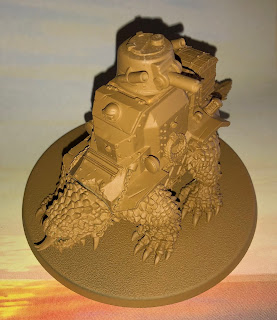 Unfortunately...it doesn't line up on center as I had hoped/planned. But hey, its the orks right? Right. Of course, the more astute amongst you may have realized that that's all but an admission that I can't line up a turret any better than an Ork/grot. To that I say: Thanks for paying attention Neverness, now sit back down and be quiet!


Additionally...not only is the turret now out of a proper center alignment, but my counter-sinking didn't go quite deep enough meaning there was an appreciable gap between the turret and hull. Thus I cut a rectangular, plasticard 'ring' to fill the gap. With that taken care of, all is now primed and ready for paint.

Lastly, I'll be putting this on the ginormous base that the venomcrawler came with (necessitating the purchase of another for the crawler) as this wouldn't fit on a killa-kan's 60mm base. This week is looking ugly, but I hope to have some hobby time at some point...maybe. :-(
Posted by Da Masta Cheef at 5:00 AM 5 comments: