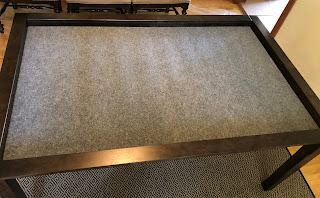 Late last year My Beloved Wolfy and I made a rather expensive (for us) Impulse buy, and on a Kickstarter no less. We bought ourselves a new dining room table. Most people right now are thinking so? That's gaming related how? Well. It was a Jasper, meaning its not only a dining room table, but a game table as well!

Unlike most kickstarters that I've backed, this one only ran about a month late on the estimated delivery time. Part of that delay was due to feedback on a short run of prototype tables, several of which were damaged in shipping. Resulting in a redesign of their packaging. Yeah, I'm okay with that sort of delay. From what I understand, as soon as the project was funded (in approx. 9 minutes!), mass production started!

The tables' manufacturer is a small custom game table manufacturer in Jasper Missouri. Previously, they built the Duchess game table which I would have liked to have gotten, but couldn't afford at the time. Their other tables are laughably out of our reach, but we splurged on the Jasper.

Aside from a few inquiries from Wolfy along the lines of where the fuck is MY table?!?, the wait for this KS was mercifully short. It took a week or so to find a home for our old dining room table (Florida, though we're only trucking it as far as Knoxville). We disassembled that, and I lugged its dreadfully heavy parts into other rooms for temporary storage. Thus, with our dining room cleared, I started assembly Friday night.

The instructions were nigh on fool-proof...ha! I bested that theory in no time at all! Mistake #1: 'No honey I don't need any help, I can do it myself.' Followed immediately thereafter by mistake #2: trying (in futility) to get the incorrect bolts into what I thought were their allotted holes. 20 wasted minutes later....and I realized my mistake and it was fairly smooth sailing from there.


Well, enough rambling: its built! Looks great! is solid as hell, and the finish matches our chairs perfectly! Neverness is slated to come over this evening for the table's inaugural game. So look for a battle report from one of us soon.

What recollection you ask? Well, to put it simply: I fucking hate assembling Guardians! My sausage fingers (several of which are now covered in glue) just don't do well at all with those fiddly little antennae on their backs. Why did those need to be separate pieces again? Oh that's right, they didn't.

To top it off, this is a Corsair. Ya know, the one and only army to die with the release of 8th ed., yeah those guys. Now they're just a few, vastly overpriced squads (well, when you have footsloggers armed with lasblasters like I do).  Oh well. For all that, with a 24" range he's more likely to kill some Space Wolves mon'keigh dogs with this than my other grunt with the fusion blaster is.

Oh, and in case you were wondering, this month has been brutal, and as such, aside from that earlier game of X-WIng this one mini has been the extent of my hobbying. :-(
Posted by Da Masta Cheef at 7:12 PM 1 comment:

The other day I was perusing the various gaming blogs that are out there and came across this one. X-wing! Ya know, that game we all used to play all the time until everyone suddenly stopped for reasons I don't quite recall. The final nail in the local X-Wing coffin was the new edition.

I have no idea how it plays as compared to the original, and nobody I know is/was willing to shell out close to $200 for multiple conversion sets to bring their collections 'up to date'. That combined with the vast majority of the 'new releases' being old ships with current cards/tokens and a corresponding price increase, doesn't help. Yeah, no thanks.

Anyways, the old edition works just fine and we have a bucket load of ships for it, furthermore we watched most of Rogue One the other night when we stumbled across it whilst flipping thru channels. Thus, when I asked my Beloved Wolfy if she was up for a game in lieu of going out to the FLGS, she was all for it!

I put together a few 'new' lists using a site that didn't update to the new edition, though admittedly I had to flip thru old blog posts on here to remember just what all we had. I used one of the new Empire lists, trying out the TIE shuttle for the 1st time, whilst Wolfy opted for an old Scum and Villainy (she doesn't qualify as the former) List.

Needless to say, due to some really good rolling on both our parts (which was noted as being uncharacteristic for me by my opponent...), along with some really, really bad positioning, the game seemed to go on forever without inflicting any actual casualties. Unlike back when we were playing regularly, and ships started dropping on turn 2.

Instead the first ships were lost in turns...8, 9? I don't know, it was somewhere around then. Damage was being inflicted, make no doubt, just not enough to finish anything off. Seriously, you know its bad when Z-95s seem resilient!

Seriously, the last half-a-dozen turns or so, every ship on the board was limping along on their last hull point and yet they still wouldn't die!!

Indeed, it was daylight when we got going and just after midnight when the game ended and the Empire ran out the white flag for a table edge.

Anyways, despite the never-ending nature of this particular game, we had a lot of fun, and hope to play some more soon. Maybe even try and resurrect it locally much like Battletech. Given that none of us have to actually buy anything is just an added bonus!

The elusive WAAAAUGH!!! Neverness came out of his mountain stronghold to bring the even more reclusive Long Wayz Dezert Groop to battle. Our semi-annual Ork vs. Ork games are always a hoot, and this one was no different.

We went a little old school, playing at home on the dining room table instead of on a proper gaming board (which I gave to WaaarghPug as I no longer had room to store it). Digging out my rarely used terrain was something akin to an archeological expedition, and scrounging around for the various bits and bobs that make up my army was much the same.

In the end though all but my lobba was present and accounted for, with a grot tank filling in as a proxy for the missing lobba. Also, as it turns out, my terrain is far better painted than any of my armies...which is kind of amusing as painting terrain is one of my least favorite things to do.

Given the pic above, its a forgone conclusion that I was using the Deff Skulls Kultur for my Army. The scenario was 'the prize' (aka Capture the flag), and with all infantry in my army having Dis iz ours! Zog off! (objective secured), hanging onto said flag would be much easier, especially as I only had a single troops choice.

Also, my army was a marginal 2 points lower in value than Neverness', giving me a 'twist' card. I drew the outflank card, meaning after deployment, I put my Grot Mega Tank into reserve in order to outflank on either turns 1 or 2.  That would prove quite fortuitous...

The following is my usual photo dump and running commentary which gives you a vague idea as to what was going on. Neverness has a bat rep of his own, so if you're get lost in this recap, there's likely a more coherent recounting on his blog.

Well that was bloody and fun! Of the 150 or so orks + vehicles that started the game, all that survived was Neverness' Dakka Jet, Warboss, and 5 boyz! Yup, that's a good scrap in my books, even if I did get tabled!

Ork vs. Ork games are prettymuch the only 40k games I can be coaxed into playing these days, though Neverness is keen to get in an Eldar vs. his...something rematch (hell, it was around 1:30am or so, you're lucky I remembered any of this at that hour). Perhaps I'll indulge him in a game of that, but for now my 40k bloodlust has been sated.
Posted by Da Masta Cheef at 9:43 AM 8 comments: