....oh stop it and get your minds out of the gutter!

lol, just a quikie post this time, forgot its Wednesday night and time for a new post. Anyways, I've purchased (or just assembled stuff that we've had in a box for a long while now) a few new additions to my GF's Fem Fa'Tau army and have been working on them this week. Ironically she's going to give my Exodites a try this weekend and I'll be fielding her Tau.

So here's what we have:

The Red Corsairs in all of their Glory!!!

So, as some of you may recall, a little over 2 years ago, I was given an amazingly converted Red Corsair army by one of my readers (a concept that still boggles my mind!). However aside from painting a model or two, I never did anything with it and eventually passed it off to Mac, one of my friends here locally. Mac is, at most maybe 19, and is easily the fastest the painter in our group. Likewise he's arguably the best painter we have as well. Indeed, if you'd like some of his painting tips, check this out.

Mac is a bit of an elitist in that he won't bring an army to the FLGS unless its fully painted, so we haven't seen the Corsairs till this past weekend. In their battlefield debut, he fielded 1k of them against my GF's FemFa'Tau (and was victorious in doing so). Here's a gallery of the minis: 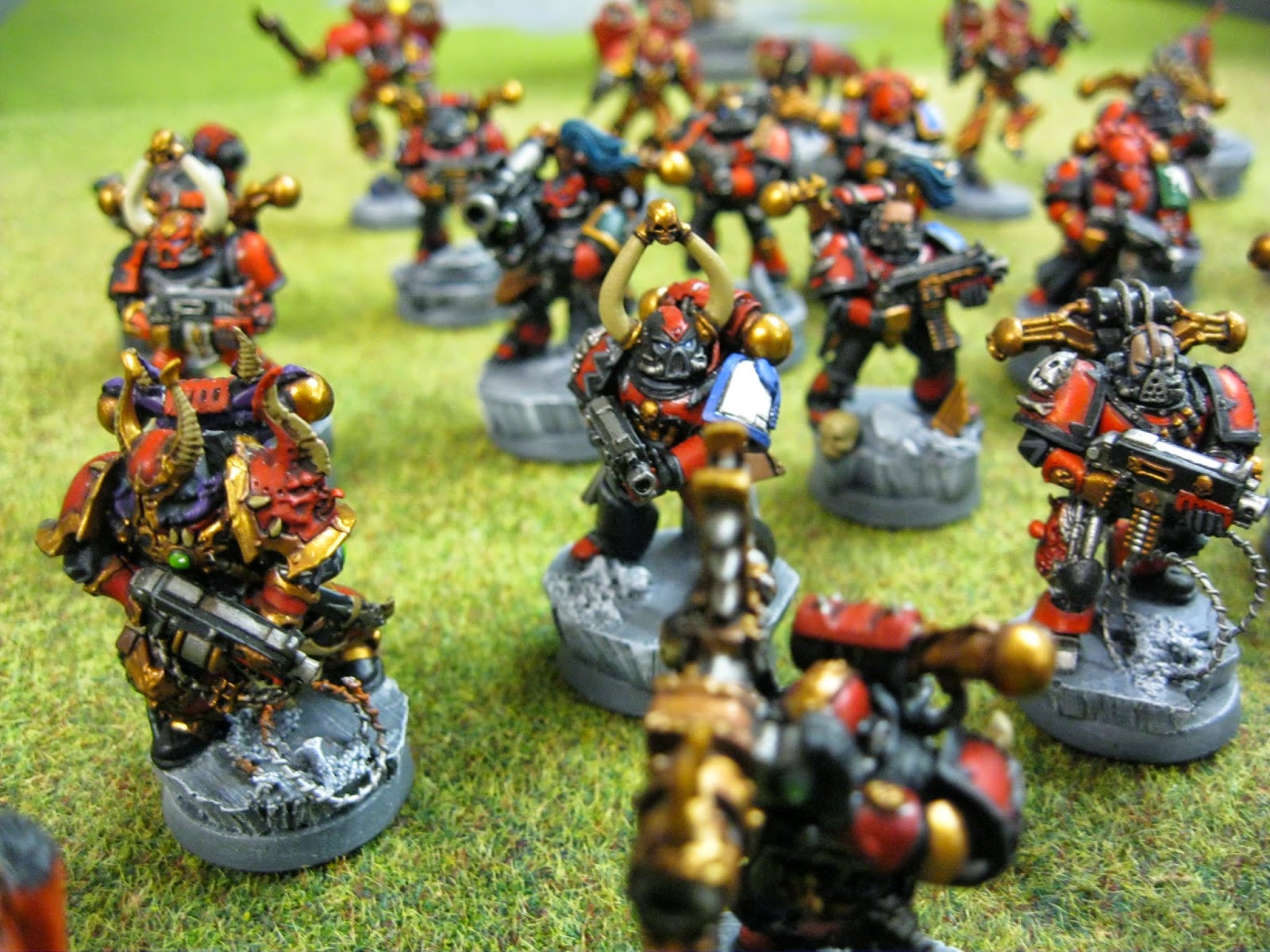 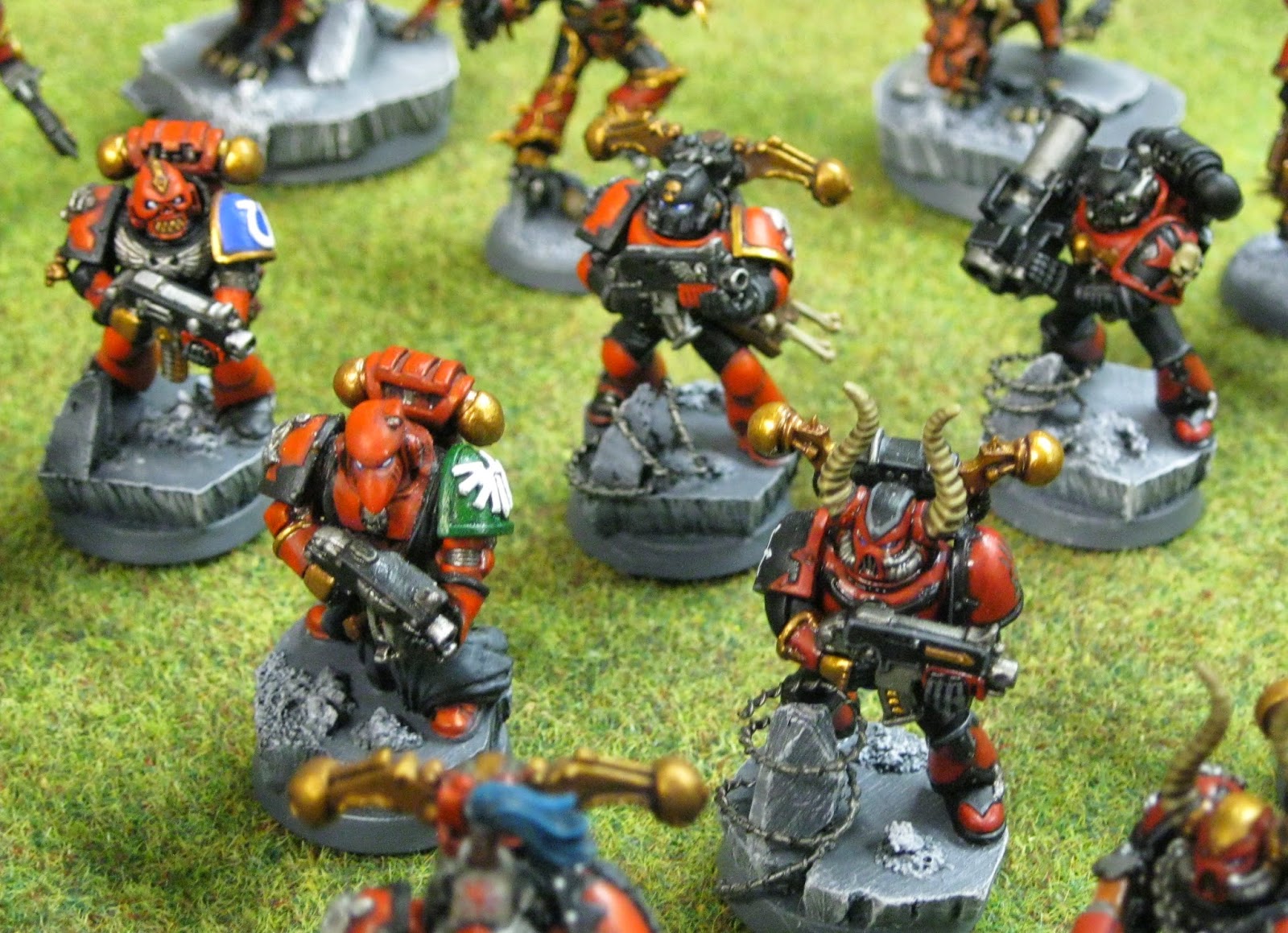 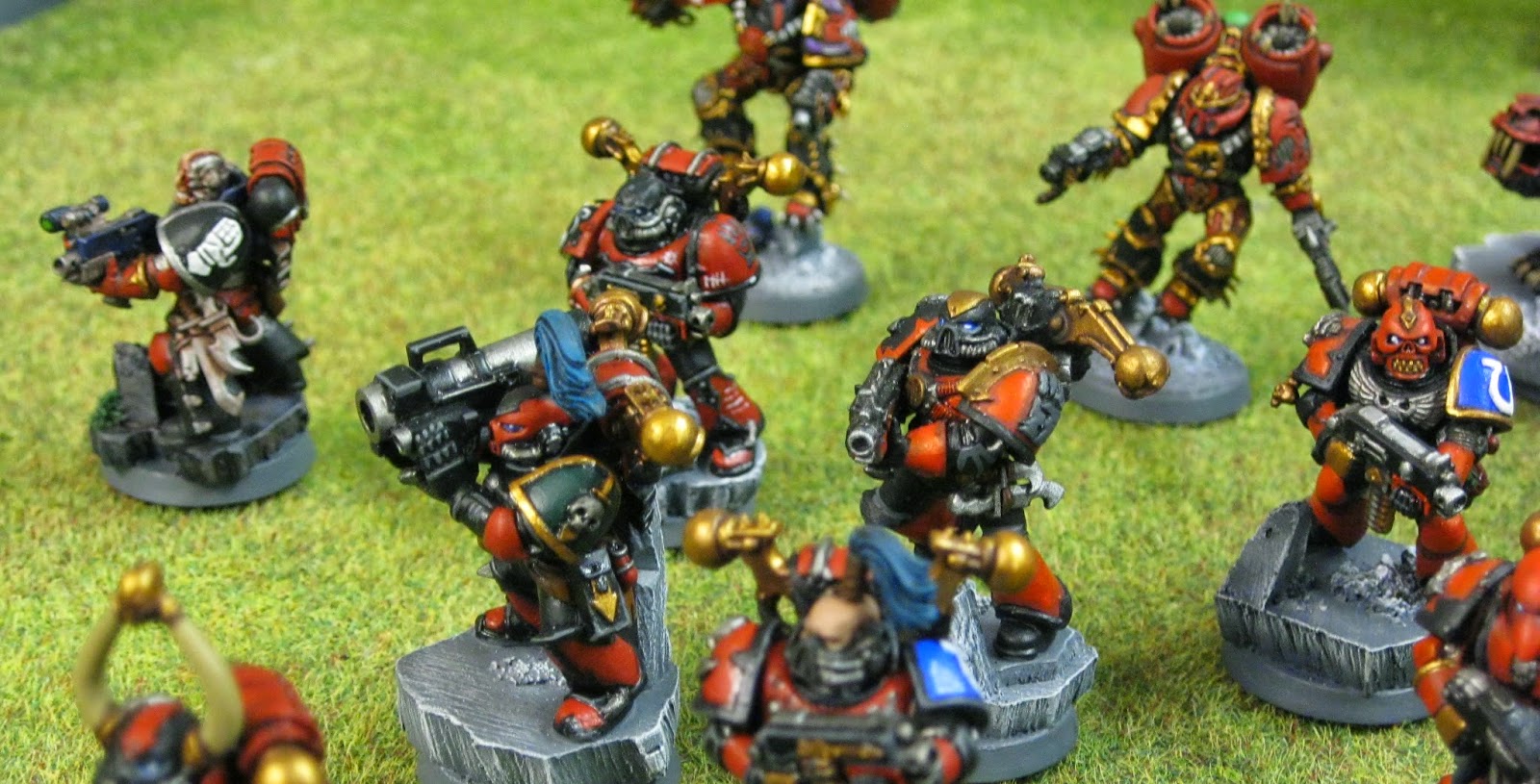 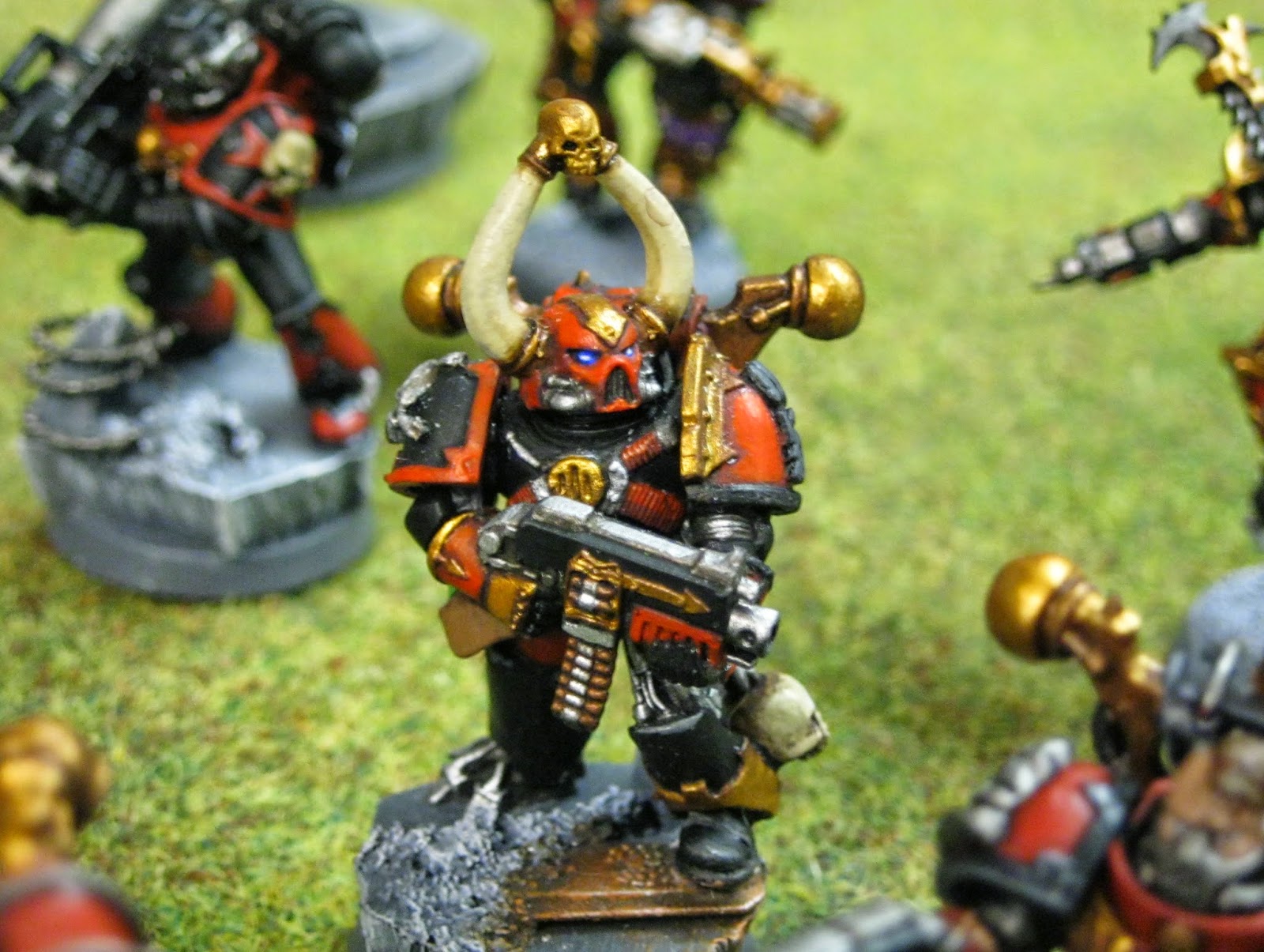 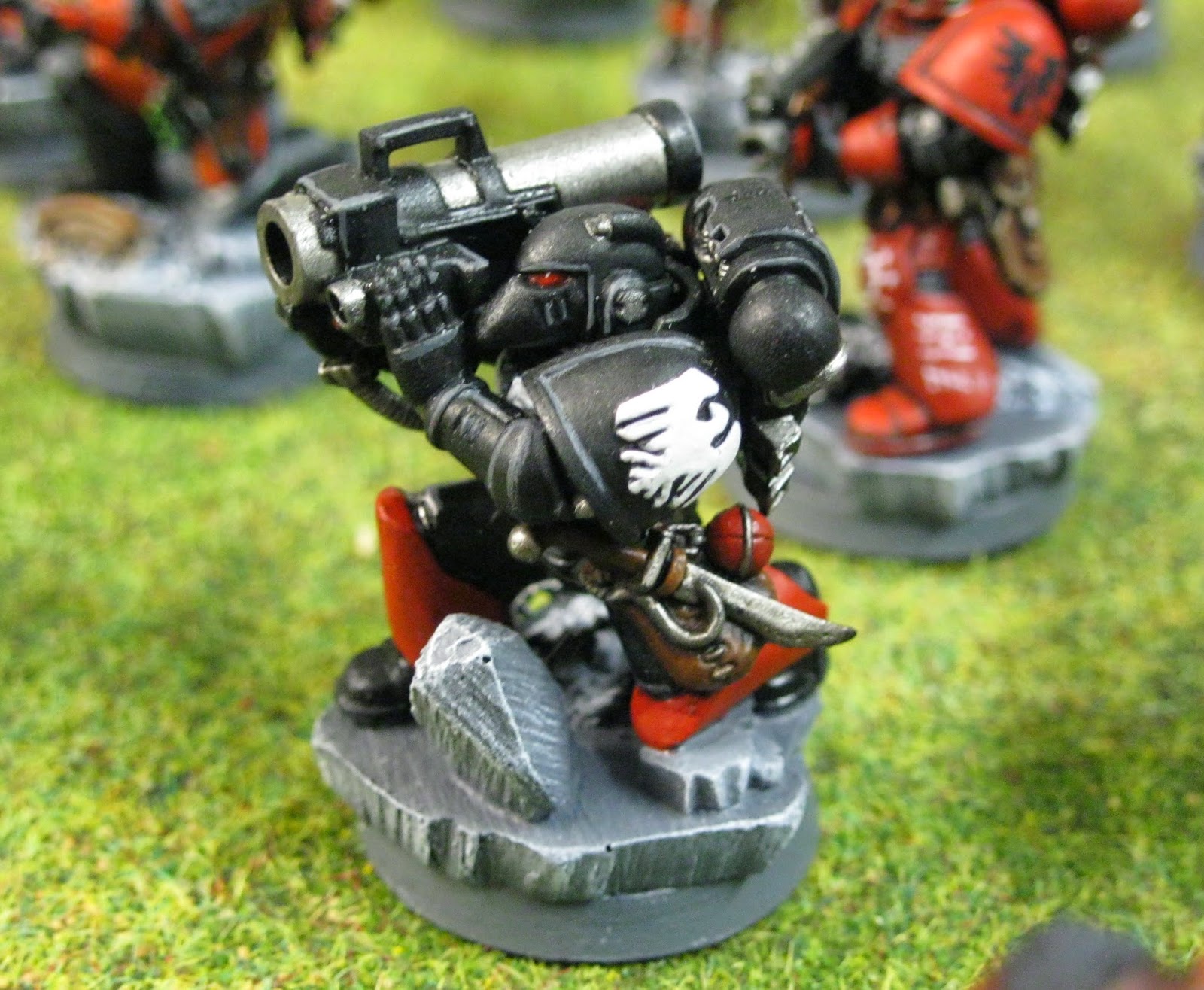 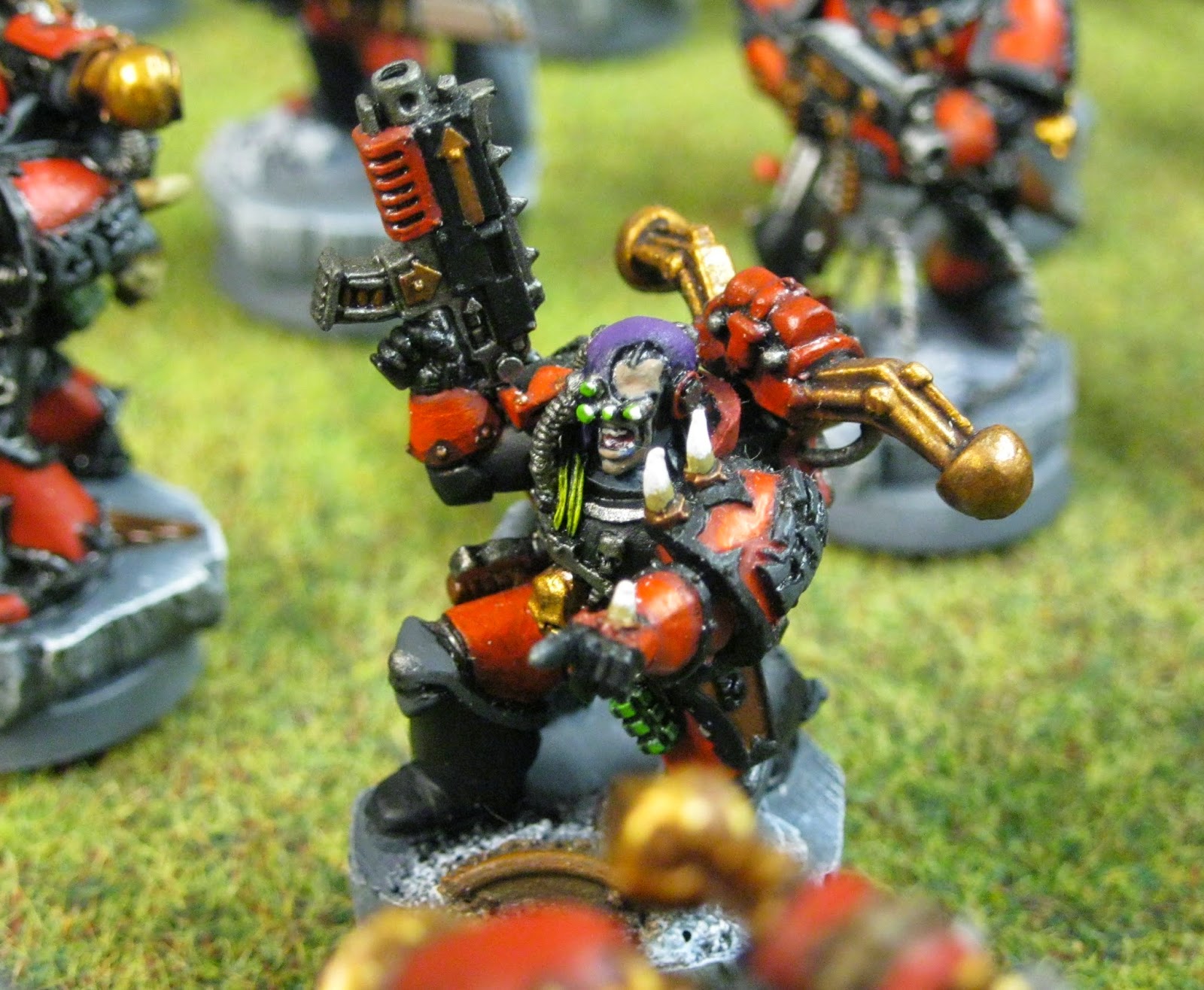 Okay seriously, given the speed with which he paints these models, and considering the level of quality, I think Mac ought to look into starting a painting service in order to finance his hobby (at his age, this game is beyond his pay scale!). I mean, wouldn't you guys pay to have an army that looks like this???
Posted by Da Masta Cheef at 7:00 AM 4 comments:

This week I've managed to squeeze in a little bit of hobby time. In doing so I cleaned up my original predator a smidge in preparation for giving 30k a try this weekend with Scott. I also added a few bits and bobs. Spikes with the heads of those victims of Istvaan IV, a spare fuel drum, and a havoc launcher which I acquired in last weekend's game night bitz swap. 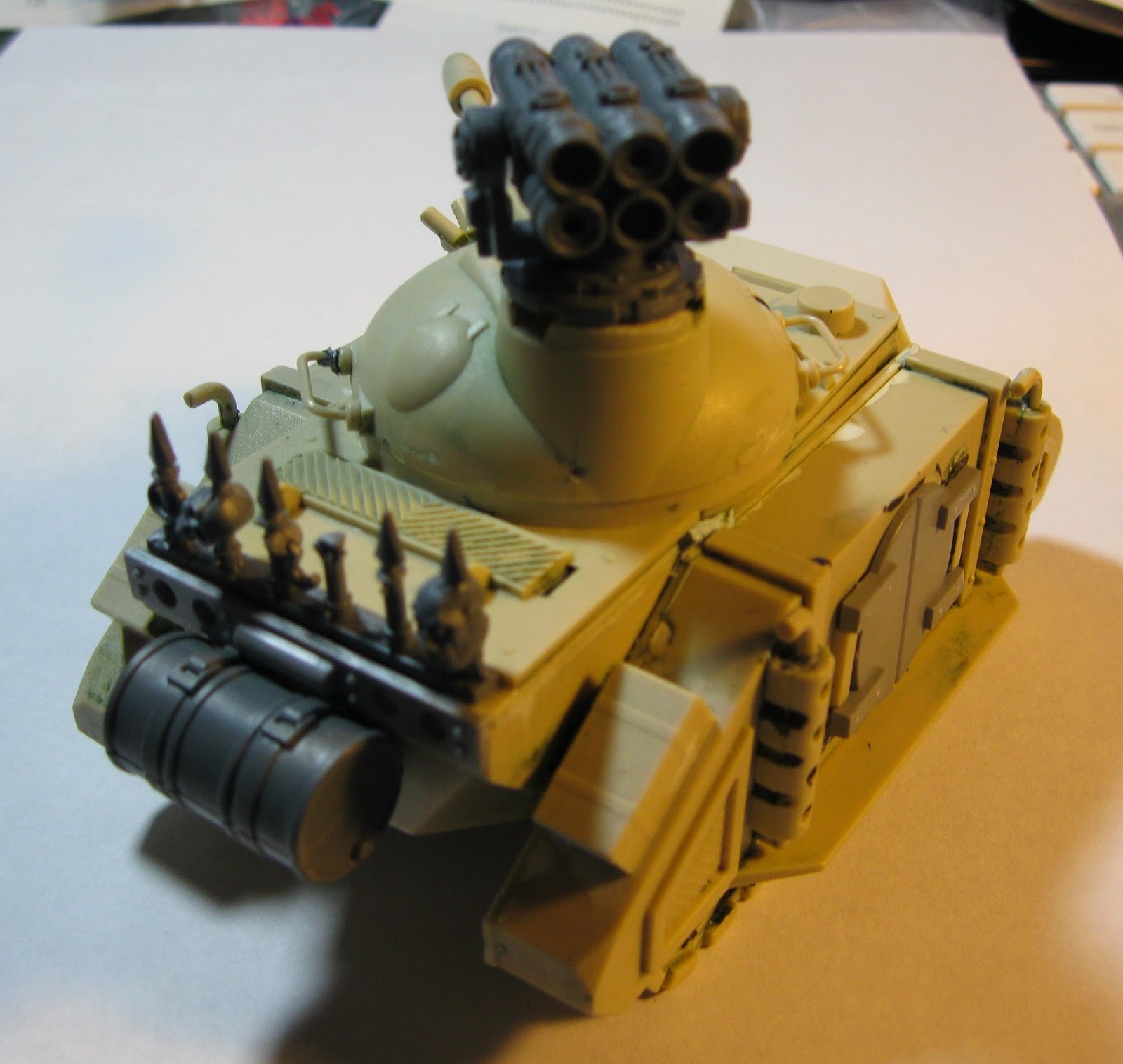 I plan to plasticard over the sides (including the hatches) to look like spaced armor. Plus that will save me from trying to scrape the old dried glue crud from around the hatches. In case you're wondering there's a crew access hatch under the fuel drum, best not to suffer a penetrating hit though, as odds of getting out of the inferno before dying is debatable.


Another fun addition has been my Magos Dominus to lead my Mechanicum forces. Not wanting a techmarine to lead the droids (proxied Necron Immortals for this first outing of 30k). I also don't like any of the engineseer minis aside from the old GW SKULLZ models which go for exorbitant prices on ebay. So after some perusing ebay I found an old, and reasonably priced Chaos Squat in exo-armor (the Nids hadn't reached the galaxy yet). 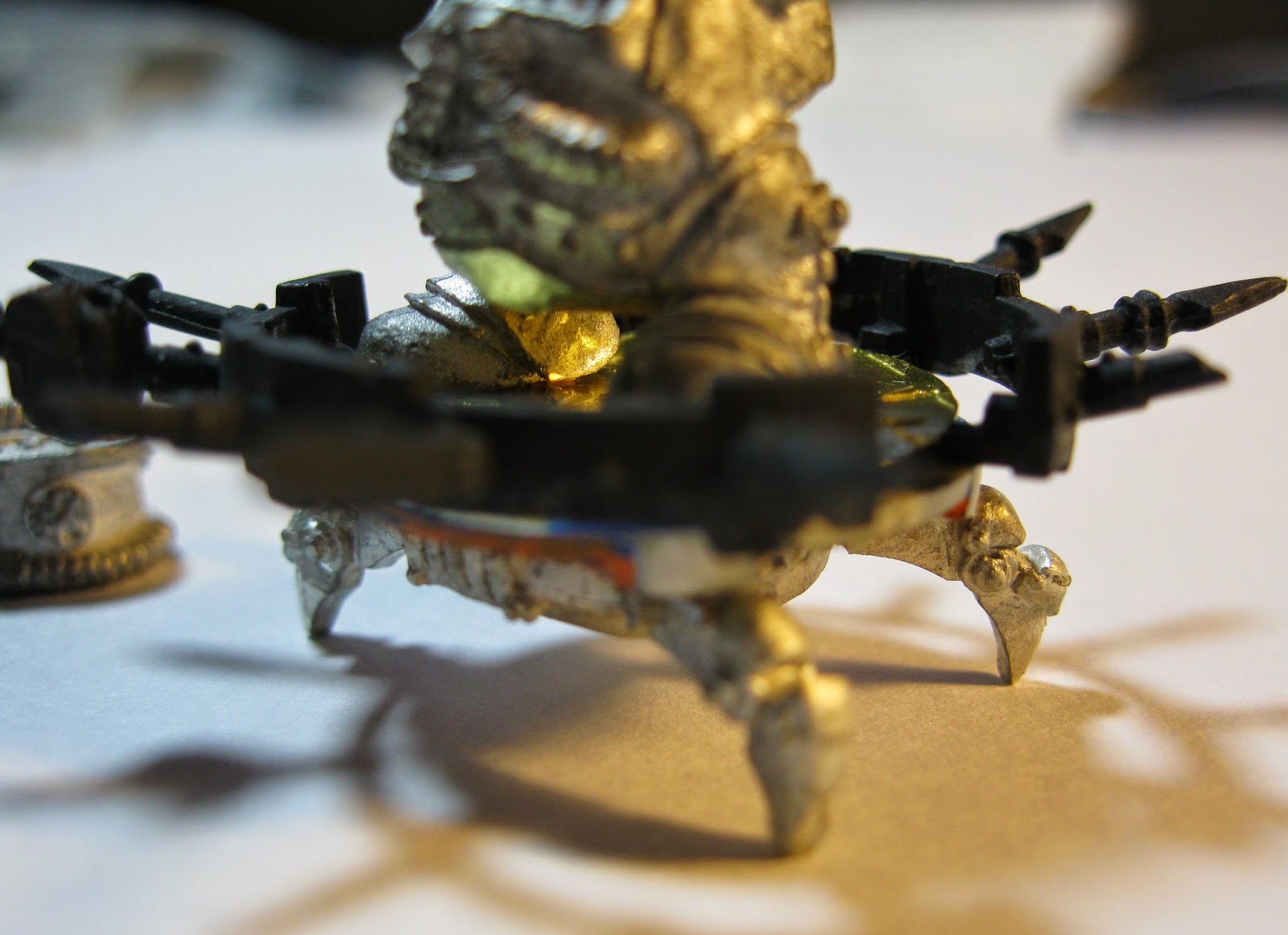 Being the runt that he is, I decided to outfit him with an 'Abeyant'. That's a mobile unit that give the 'magos' move thru cover, it will not die, very bulky, hardened armor and an additional wound. Most important of all, it means he'll be able to see over walls too!

What if General Pickett had trukks to help take the ridge...

Here's a battle report of my game this weekend. I wanted to use Da Long Wayz Dezert Groop in all of its mechanized glory! When tallying things up, they clocked in at 2K! Patrick, always a fan of bigger games as it allows more than one Riptide was all to happy to take me on.


...and with that, I was tabled the top of turn 5. So I guess the trukks wouldn't have helped Pickett either. Still we had fun, and Da Boyz had several highlights:

• The Deffkopta one-shotting Longstrike's Hammer Head
• The Tankbustas putting 3 wounds on a riptide and actually killing a vehicle (for once they accomplished something!).
• Da Masta Cheef killing the Riptide in one round of combat!

So it was all good.

Speaking of the Tau, the Fem Fa'Tau were engaged by RTVoril's Eldar. I really didn't see much of the game, however at game's end, RT named my GF 'She who destroys armies'! So you can easily tell just how their game went...lol. 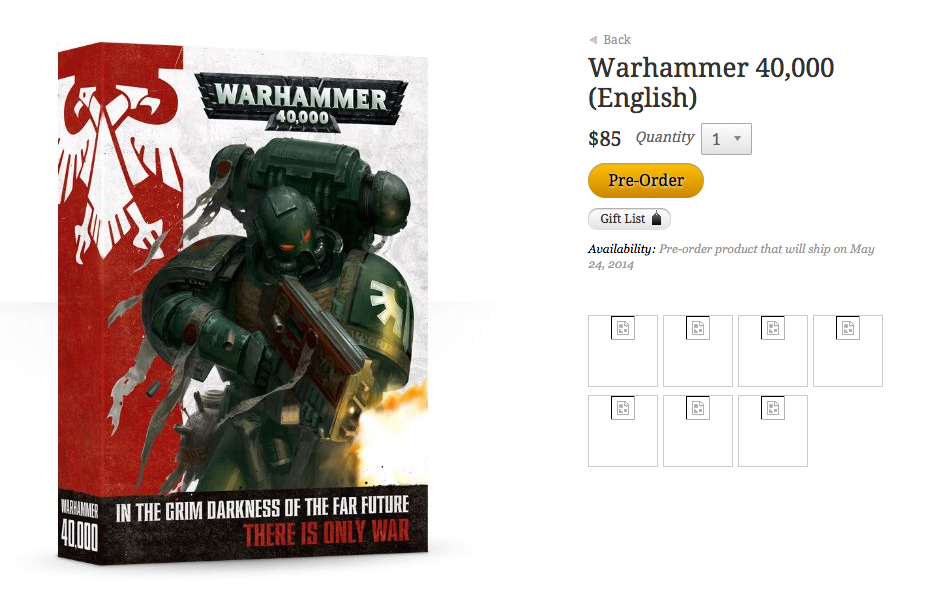 ...and why a Codex, which is only ONE book, has no slip cover and totals less than a 3rd of the pages, still costs $50.
Seriously.
WTF?

I got a game in with my friend RTVoril this past weekend, he was using Dark Eldar whilst I had Exodites and Eldar Corsairs. We played on the FLGS' new ice world table and thus the Doom of Mymeara  it was!

1500 points, 'Tau deployment', Relic mission, I think I went first, but it was night-fight so my shooting was entirely ineffectual aside from killing some mandrakes who popped up behind my lines. The following are a few pics of the game, mostly taken by Neverness (thanks by the way!).

Technically I won, Warlord and 1st blood (thank you Mandrakes), vs. the DE getting Warlord only. As usual anyone foolish enough (me) to pick up the relic was summarily slaughtered...so, while I did win, it was a pyrrhic victory at best. I had a mere 5 models left, and would have been tabled (easily) had the game gone one more round. In short, the DE kicked the ever-loving-shit out of my Exodites and Corsairs! We had fun though, so it was a good time!
Posted by Da Masta Cheef at 7:00 AM 5 comments: