Notta whole lot has gone on hobbywise this week. Christmas didn't net me any new toys, though My Beloved Wolfy did get me the novel: Magos, the latest in the Eisenhorn series. True to Abnett's form, its been an excellent read right from the start! Its a fairly thick tome, I'm a slow reader, and do so usually only on my lunch breaks at work, so it ought to keep me entertained for quite awhile. 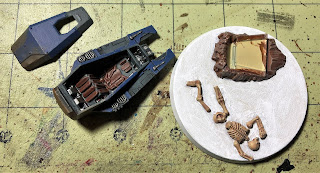 On the painting front, I'm chugging along slowly but surely on my Tyranid Warrior's base. Its ready for a decal on the escape pod door, and aside from the final assembly, snow flock. However the latter won't come until I first paint the pile o' parts that is my Tyranid warrior (the bastard took a swan dive off the deck during the priming stage that left me searching thru the grass for bug bitz!).


Have a happy and safe New years folks!!!
(oh, and be sure to drink heavily if you're hunkering down instead of going out)
Posted by Da Masta Cheef at 5:00 AM 2 comments:

Just as the title says, I'm finishing out the year with a completed unit. Thus, I present to you my Marik Militia lance for Classic Battletech:

Yes, it took almost a full month to paint just four measly mechs, shut up! (lol) I'm quite pleased with them overall, and will do a group shot with all of my Marik Militia forces once I paint my tanks. Here are a few close up pics:

I'm not sure what's next in the ol' painting queue...I'm thinking its a toss up between Nids, Marines and Muppets!

There's just too much going on at the moment to dedicate any appreciable time to hobbying. That's alright though because there's at least a few presents, and a lot of people whom I haven't been able to visit with in awhile involved! So its all good.

As such I wish all of you out there in the ol' blogosphere a Blessed Yule & Winter Solstice, Merry Christmas, Happy Hanukkah, Happy Kwanzaa, and Happy Holidays to whatever you choose to celebrate that I've missed!

Also, I'd be remiss without reposting my Christmas classic repost from 2010, a song I can't help but sing whenever I hear its mainstream incarnation that's been playing incessantly here of late:

In the middle we can build a bridgehead
Then pretend that we’re gaining ground
They’ll say are you ready?
We’ll say no man!
But we’ll go when
The Commissar’s around

In the middle we can build a bridgehead
Then pretend that we’re gaining ground
With bayonets we’re gonna go in!
Until their guns mow us down

Landmines blow
And their killing
Through your nose, blood is spilling
We’ll falter in pain
And then run away
Walking in a winter wasteland

The Silver Drakes had a good run going there, but ya can't win 'em all. That and the combination of only being able to field 5 guys vs. a Nid KT with a fucking lictor that's all but being guaranteed to be in close combat at the beginning of turn 1 kinda skews things outta my favor no matter what strategy one tries.

Still, my boys went down fighting (or, in some cases hopelessly flailing) and as is always the case when playing Screech, a fun time was had at least.

Well, with the loss of one veteran, to be replaced with a noob means I can field 6 guys again right? Wrong! The rest of my fire team went up to both level 3 as well as another point each, all but negating the noob discount! Hell, after surviving a single game that noob will then rise up to the same level (both in XP and point cost) as the rest. Worse yet, that infernal Lictor not only recovered following the battle, but gained an armor save increase to a 4+!

Oh well, on to the next battle I suppose!

Nope, no progress on the mechs, instead...

Waaaaaaaaay back in the day (pre-blog times) I had a sizable Iron Hands army lead by the infamous Iron Father Samuel L. Jackson. I used a techmarine as a base for the conversion as I didn't like the actual Iron Father mini, and later on he was cross-promoted (though to the Iron Hands, it was probably more like a demotion) to a captain when the Iron Father rules went away with an edition change. He was armed with a combi-flamer and a trimmed down chainsaw off of the IG Sentinel kit.

When I was tired of the monochromatic-hell of that army, I ebayed 'em but Samuel had earned himself an honored spot on my Hall of Heroes (HoH) display stand, where he lived out his dusty retirement until...I bumped the shelf atop of which the HoH was sitting. Unfortunately Samuel took a tumble to the floor and shattered into his constituent parts! Not having any use for him at that point, I collected his remains and tossed them into the purgatory of my bitz box.

There he rattled around amongst years of collected gaming spares and detritus till I decided to resurrect him a little ways back. Had I thought it out properly (rather than just on impulse), I would have stripped his paint first but oh well. I added a pack and 2 bolt pistol hands, added a new 32mm base and ta-dah! He'll now be a 30k Moritat for my Blackshields/Renegade Iron Hands army. The arm on his pack is less a servo-arm and more a mechandrite. In-game it serves no purpose, aside from adding some visual appeal. Instead I figure it would assist in reloading his pistols, especially as it would be able to swivel around and actually reach the ammo pouches on Samuel's pack!

With so many half-done projects already in the works, I have no idea when I'll actually get to painting him up, though given my usual tendencies...probably Tuesday!
Posted by Da Masta Cheef at 5:00 AM 6 comments:


Blizzards, and anything approaching the like are quite rare here in the Appalachian Subsector, but luckily we awoke to just that Sunday morning! When I measured the white stuff around noon, we had 8" but it kept on snowing for quite awhile so we probably got more like 9" in total. Meanwhile, at my sister's house in Knoxville, a mere 2 hours away all they got was a dusting of snow, and another and a half further south, a friend of mine in Chattanooga reported that all they were getting was a cold, miserable downpour all day! Yes I'm bragging and no, it doesn't matter since neither reads my blog, lol!

Whilst I excavated my trukk to make life a bit easier Monday morning, I made no effort to reduce the 1.5-2 foot high berm of snow the plow trucks have left about 5 feet behind my trukk.  I'm not gonna lie, I can't wait to finally have an excuse (albeit a brief one)  to actually use the 4WD that I haven't used since buying it almost 3 years ago when I leave for work!

With the white stuff falling, we opened the mini blinds all the way, put on the Christmas music and decorated our tree. Its the first time our kitty Baxter has ever experienced one and he was having a field day with it! After a few passes amongst the faux branches, he decided to romp thru the packaging of the decorations when a vicious gift bag attacked him! (he got his head stuck in the handle). After ramrodding around the house in a panic he broke free after colliding with the threshold to our bedroom at full speed! Luckily he was alright, but after removing the remnants of the offending bag, he's avoided the living room since. Clearly he's had enough of this holiday shit.

As for the hobby front this week, not much to report I'm afraid. I did at least paint the metal bitz on my mech lance, clearing the way for touch ups and detailing before slathering them in ink. With luck I'll finish 'em up this week, but don't hold your breath on that...
Posted by Da Masta Cheef at 5:00 AM 9 comments:

Having just built my the final two mechs in this lance last week, I thought I'd divert myself away from Kill Team projects and try to capitalize on my Battletech enthusiasm by painting these before my mind wanders off in another direction...again, as usual. So I took one of my Urbies out of the case to use as a guide to make sure the red and blue are on the correct sides. Despite being a simple color scheme, its easy to fuck up by getting the colors reversed...

Aside from the Purple base with red and blue trim, there's no real definitive way to paint FWLM mechs. I figure the trim is left up to the individual mechwarrior's preference, kinda like the nose art on real-world military aircraft (well, mostly vintage aircraft anyways). True, my urbies all match, but hell they're just urbies. Their mechwarrior's are too busy trying to get promoted out of those deathtraps asap, to even worry about what colors they're painted!

I had hoped to get a game of Battletech in this evening with my buddy Rob, but that's not going to pan out I'm afraid (my schedule is at fault this time, not his as is the norm). Oh well, that give's me more time to get these closer to being done (as opposed to the current: base coated/fugly stage).
Posted by Da Masta Cheef at 5:00 AM 5 comments:

So uh yeah, surprise! Nothing was painted this week as I spent an inordinate amount of time assembling these two little Battlemechs. Seriously, I could've assembled a full tactical squad, hell maybe more in the same amount of time! Its no wonder that there were so many single-piece monopose minis back in the day.

Still, these mechs look far, far better than the previous sculpts that they replaced. Better yet, these two (a Wolverine and a Griffin) finish out my mech company meaning I have no need to buy and build any of these two minis ever again! That is assuming of course that I don't drop one, as a fall from a table with no doubt be enough to shatter either into it's constituent parts with frightening ease.
Posted by Da Masta Cheef at 5:00 AM 5 comments: