Is your Munitorum Container half full? or half empty?

The distractions are legion but yes, I'm still puttering along on this little project. Its just about ready for the roof to be glued on, so figured it would be best to show the interior contents before they become shrouded in darkness. First up, the cargo side of the container:


Tucked away in back is an old, reclaimed bronze statue of some long forgotten Space Marine hero. Whilst not visible amongst the clutter, there are two large holes going partially into and one all the way thru this metal masterpiece! Clearly this was the work of a power drill heavy cannon fire. What can be seen is that this glorious relic has been repeatedly shat upon by a multitude of little feathered heretics (yes folks, by Inquisitional decree hunting season is now open!).

Next up we have a fuel drum, jerry cans, several boxes and crates no doubt filled with all sorts of essentials, and lastly two slightly used, but still serviceable bolters. Of course the 800lb gorilla in the container is the dented but apparently serviceable Exterminatus device (just in case things take a turn for the worst, and the container's owners want to add a good ol' fuck you to their glorious last stand.

On the other side of the partition is the cogitator array. It will control the still-to-be-added heavy stubber turret, as well as serving as a communications hub, data processing, downloading heretical yet so alluring Slaaneshi cultist pornography...

Moving on. Tucked in next to the cogitator is a small, worn container. It probably serves as a step stool when performing maintenance on the stubber turret above, or perhaps as a seat whilst um...enjoying, the above mentioned...um cultist, uh...propaganda...

lol, gluing on the roof is next, then taping off the exposed innards, followed by priming the exterior (whenever this arctic weather decides to go back home) and so on.

I fielded 'Nids for the 1st time in my 24 years of gaming!

Ya know, after gaming for so many years, you'd expect that even with an entirely new force, my opponent could still expect me to field a kill team that executes it's mission with skill and finesse right? Right...to that end, my strategy was as simple as it was elegant: Get 'em!

As you're about to see, my mastery of the hive mind is meagre. However I was playing vs. WaaarghPug's orks who employed a similar strategy which I'm pretty sure also equated to: WAAAAARGH!!!

Orks vs. Nids...yeah you know where this is going. No mission. No objectives (well, kill points), and to have as much fun as possible! Its been too long since seeing, much less playing vs. WaaarghPug (years really) and we were both looking forward to the coming slugfest.


Oh well, it was fun and despite my abysmal rolling, my team wasn't broken due to  sheer numbers rather than any actual skill on my part. Better luck next time I suppose. Still, much fun was had which is all that really matters.

Speaking of Kill Team, our league is 'done'. Everyone's tired of fielding the same force, game after game. I would say that at least I know the rules now, but as WaaarghPug proved on turn one of our game above, he has a better grasp of the rules from one read thru of the book than I do after the whole league, lol. Yeah well, rules were never my thing...
Posted by Da Masta Cheef at 5:00 AM 5 comments:

Breachers have always been my favorite squad type in 30k, but until now I've never had any. Clocking in at about $100 for a squad of 10 plus shipping from England was too rich for my wallet. Then FW became available in the USA, huzza-wait what? A price increase? Great, now they're about $112, plus shipping and sales tax. Bleh.

Recasters clock in at about $65-$70 for a squad of 10, but I found these on ebay for $48, a definite bargain! The seller said he thought these were recasts, hence the low price. However if they are, then I sure as hell can't tell from the casting quality.

Only two had minor build issues with poorly positioned guns, so I popped those off and replaced 'em with a flamer and a combi-flamer (in the latter case promoting that grunt to squad sergeant). They have Thousand Sons shoulder icons which I'll have to remove, but as these are resin minis that ought not be too difficult.

Last Spring, when finances were getting frighteningly tight, most of my 30k stuff went the way of ebay to cover the bills (meaning I haven't played the game in a long, long time!). However skipping forward to the present, along with the minis above, I also picked up 10 decently painted MK IV bolter grunts on ebay for $33!

These additions have finally given me 30k's two quintessential troops choices: breachers and a tactical blob squad. Adding them to the remnants of what I already had brings me up to about the 1000 point mark. I'm calling this army 'done' from a purchasing perspective for the foreseeable future, and I hope to get some 30k games in with Bob here in the next few months. For bigger games, I have my Imperialis Militia horde, but I prefer smaller games so as not to get overrun with heavy armor, against which I simply cannot compete.
Posted by Da Masta Cheef at 5:00 AM 2 comments:

Seriously. How can something so simple be so fucking difficult? Apparently being able to measure worth a damn is a skill I lack. The two layers of the first partition in my prior post were crooked as hell, so out they came. I measured up a much more symmetrical one, measured off of the first, glued it in as well of both sides and all was good! Well, it was until...I test fit the roof and found an eight inch gap.

My Beloved Wolfy suggested using my mortal enemy (greenstuff) to fill said gap, but the the doors wouldn't fit either (not that they'll be closed). Furious, out it came as well which left me scrambling and scraping thru the dregs of my supplies so find something that would work. I did find an actual partition (ironically) left over from our X-Wing case that sort of fit after trimming the corners, though there's a gap above and below. No worries on those, they'll just ensure ample room for the rodentia/creepy crawlies to scurry back and forth. That and once filled with equipment they won't be all that noticeable. The gunked glue and what not will be painted as the detritus that collects in the corners of...well, everywhere.

I've wanted just one of these for awhile rather than a box of three, and finally found one on ebay for a decent price, so: IMPULSE BUY! (I've had several of those lately actually...but let's not get into that just yet).

Anyways...I'm partitioning mine, so one side will be a pseudo-command post...or something, and the other will be storage. Both ends will be open necessitating an eventual base so I don't break the doors/ramps off. Sadly there's been quite a bit of adulting this week, so I haven't had a whole lot of time to work on it yet, but here it is thus far:

My Tyranid Warrior leader for KT is complete!

The title says it all really. I'm quite pleased with how it turned out, and even found an old sabol tray in which to transport it (in a space that once held a space marine dreadnought).

I had hoped to pop one of my last 40k cherries by fielding Tyranids for the 1st time ever in my gaming career on Saturday. However that plan was thwarted by a lack of KT opponents despite a good turn out. Oh well, it'll happen soon enough I guess. Anyways, here it is: 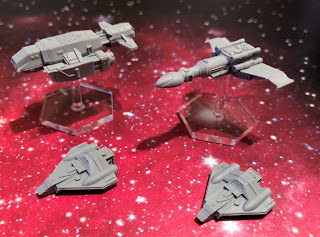 A few months back we gave the Starfinder RPG a try. My Beloved Wolfy is a RPGer far more than a mini gamer, and was thrilled to try out a new RPG for the first time in years. I've missed RPGing as well and was happy to give it a go. Unfortunately, we only managed 2 game sessions before it all fell apart (but that's a rant for another day).

Wolfy and I, were intrigued nonetheless and we'd like to give it another go...someday. Prior to our meeting, My Beloved Wolfy was a longtime WHFRP DM and in hopes she'd take up the mantle again, I got her the Starfinder core rulebook for Christmas. To go with that I got her a map and accompanying ships from 0-Hour Games. Just a small map to see if we liked 'em. Sadly, my package was lost in shipping meaning it didn't arrive for Christmas. Eventually giving up on it I contacted the 0-hr games and got a replacement which arrived yesterday. Our preliminary thoughts on them: its good! Very good!

Having played Dark Heresy for years, we usually had an empty grid with 'maps' temporarily drawn in dry erase marker. Well, now we have ship maps with a 1" grid subtly printed in the interiors. There's a discount if you buy 'em in pairs so you have access to both sides at once, but I went on the cheap as I wasn't sure if I'd like it, and was already well over budget on my Christmas spending.

Additionally, the map came with resin ship miniatures whose casting quality is flawless, and will work just fine on our X-Wing space mats. Stay tuned, as there will be more on this in the future as we look to giving Starfinder another eventual go.

The Fate of the Lions of Harlech?


The 3rd part of my Base for a bug series has taken a tragic turn I'm afraid. The Lions of Harlech, a both storied and highly honorable space marine chapter, has been curiously silent for quite sometime now. Indeed, they've been absent from both the blogosphere as well as local gaming tables since the end of last April, and I think I know why.

As true loyal sons of the Almighty God-Emperor of Mankind, I've discovered a piece of evidence revealing their possible fate. The Lions, were apparently attempting to link up with the Silver Drakes, bringing desperately needed assistance in the Drakes' grueling war against the Tyranid menace. Sadly, the Lions never made it.

Instead, the only evidence of their valiant attempt to reach their Primaris brethren has been an abandoned escape pod bearing their colors and heraldry. Nearby lay the skeletal remains of what appears to be perhaps a crew member or possibly chapter serf from this now missing in action chapter. On Holy Terra, the Bell of Lost Souls (no, not the clickbait site) has yet to toll for these lost battle brothers in hopes that some survivors may yet be found still fighting the Emperor's enemies!

As for the Tyranid warrior who is slated to grace this base, whilst it has been base coated (mostly), the process of painting it has been a bit of a struggle. Mainly because our kitty Baxter has now largely thwarted my last two painting sessions by deciding to sleep in the midst of my desk/painting menagerie. Indeed, its difficult painting anything when you're clinging to a mere 2 inch strip of desk at best, praying the the next kitty-stretch doesn't send everything tumbling into the abyss, again...