Why are we in this bloody expensive hobby again?


I finally made it to the FLGS for what seems like my annual paint restock this past Saturday, my first visit there in months! Indeed, the stores owners asked if I didn't like 'em anymore. Sad face, real life sucks. Anyways...

Paint wise I bought, some more agrax earthshade as my washes were down to a mix of the last dregs of all I'd had left. Testors' flat black spray (depleted that morning) and matte varnish (almost gone as well), Leadbelcher (which was down to sludge), 2 shades of grey for all of my new Battletech terrain, and lastly the orange contrast paint to try out on my cultist/renegade IG horde. I looked at the hideously overpriced GW contrast undercoats, but opted not to get one, instead hoping one of my half dozen primer colors will instead suffice...will see I guess.

I also bought a pack of grass tufts to try out (hard to believe I've been in the hobby this long and have gotten any of these), a pack of green stuff (my mortal enemy) to fix a pair of my mother-in-law's Christmas earrings (don't ask), and lastly my first White Dwarf purchase in many, many years to get the new Inquisition rules (my favorite non-Ork faction).

Not too impressive of a haul, but when I got to the register and Tennessee added it's 9% sales tax in, that all clocked in at $75.75! The sticker shock left me wondering 'why do I do this again?' Guess it's no wonder that I only restock my paints on an annual basis.

Sheesh! Felt like I ought to sell an army or something to balance this all out, but then I remembered that the Orks were the only army I had left (and I doubt any of my multitude of kills teams would net that much). So, I counted this as my annual Christmas present to me and likely won't be back to the FLGS to shop again till next year.
Posted by Da Masta Cheef at 8:03 AM 9 comments:

Back when I semi-rage quit playing the Orks upon the release of the wretched 7th ed Ork codex, I sold the lion's share of my army, along with my Warboss 'Da Masta Cheef'. I felt he ought to be leading hiz boyz whereva dey wuz  fightin'.

My Beloved Wolfy and Neverness both were aghast upon hearing that and over time I did in the end have a bit of seller's remorse about selling Da Cheef. I'll admit it now that...every now and again, when bored and with time to kill, I'd peruse the ebay offerings for used warbosses in hopes of findin' Da Cheef.

Countless auctions of this one, same mini, in everything from on the sprue to primed to 'pro painted' (sometimes yes, and so very, very often laughably no). But never once did I see my old Warboss. In his absence, Krump & Pittance stepped up to assume the role for the few 40k games played since then. He has performed with mediocrity which is all that can be expected of a glorified nob.

Wouldn't it be nice if GW got over the fucking endless Primaris offerings and released a new (not 10+ year old) foot slogging Ork Warboss? Yeah, no. Apparently not.

Well...is there anything else out there?

Yes, quite a lot actually, or as Bob so eloquently put it: 'When other companies GW better than GW itself can actually do.' After searching through all of the 3rd party offerings, I found a new warboss from Hardcore Miniatures, one of the MANY non-GW companies filling that obvious void!

Hopefully I'll get him painted before he sees the table top, and with no 40k games on the horizon there's a halfway decent chance of that actually happening.
Posted by Da Masta Cheef at 5:00 AM 5 comments:


Whilst slogging through the nightmare of October, I decided on a little bit of 'retail therapy' in hopes of taking my mind off of reality for a bit. I couldn't make it to the FLGS, and I was assuming (quite correctly) that at that point in time we were flat broke. Thus I went to my usual haunt of ebay to see what sort of bargain I could scrounge up.  In doing so I found this AT-RT. 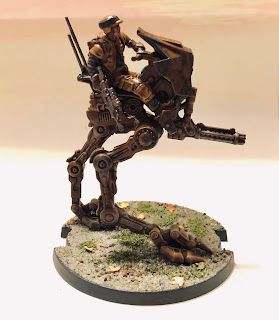 This was my first Star Wars Legion purchase, as I only know of a handful of folks playing it locally and my contact with them ranges from next-to-never, to avoid at all costs. It looked like someone was selling off their personal collection, and this was the lone unpainted mini (and as it turns out, also missing a few parts but I'll get to that in a bit). Anyways, I bought it for a mere $6.14 including shipping, and then had a new toy/game to research when time permitted, which added to the bang for my buck considerably!

The AT-RT is an obsolete though still formidable walker dating back to the Galactic Republic and Clone Wars. As such, by the time the Rebellion rolled around, all surviving examples were rebuilds from either battlefield salvage or junk heaps. Meaning that if anything, the few missing parts (2 pistons, 1 per leg) were if anything totally in character for this model.

It would have been MUCH easier to paint were it disassembled (or at the least the pilot removable), but such are the penalties of dirt-cheap, 2nd hand ebay minis. Most of the body is a lovely shade of rusty metal, with only the blast shield having any sort of camouflage (a not uncommon feature of surviving AT-RTs, though I'd imagine that it would be of questionable value given the small surface area of the armor plating). 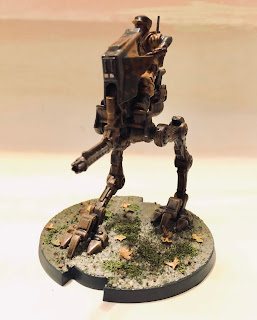 My initial attempts at said camouflage were disastrous, and my urban camo looked more like a badly rendered white/black/grey zebra striping. The 2nd layer of camo (in hindsight) ought to have used some paints with a bit more contrast. Sadly, it's been so long since my last paint restock, I'm more or less in an involuntary limited palette mode most of the time. It looks alright though I guess.

Luckily for me, conformity, especially amongst the more rag-tag and motley units of the Rebel Alliance isn't much of a concern, and any future vehicle purchases can simply be painted differently without a second thought. In all honesty, I was thinking this as more of a 'Scum and Villainy' unit (ala the X-Wing game) rather than proper rebels.

To date I only have the Generic Rebel leader specialist (another dirt cheap ebay buy) to paint to complete my Legion 'collection' lol. Not sure if I'll really pursue Legion as a game to be played though, or rather just something different to occasionally paint.
Posted by Da Masta Cheef at 8:14 AM 8 comments: