Ya know it occurred tome earlier this week that in all of my 20+ years of mini gaming, and the myriad of colors I've primed said minis in, I've never once (until now) primed a 40k tank in white. Now, whilst to many folks that statement will likely elicit a mental 'so what?', it's been my experience from watching others that priming tanks in white always ends either badly, or takes two to three times as long to complete (unless you're intending for the whole thing to predominantly white in the end). Indeed, I used to game with a guy who's White Scars' paint jobs barely went beyond their primer coating...

Yeah I know contrast paint is apparently great and all, but washes on large, flat, horizontal surfaces has also been a bit of an issue in the past for me, and given that contrast is essentially paint mixed with a wash, I think that that maybe part of my worry.

As such, it appears that I'm stalling.

I've painted two and a half Battletech minis this week (the 'half' was a partial repaint). My second Silver Drakes sergeant is about a third of the way done, and then...clear out of left fucking field (yes, waaaaay out there) I started painting on the rest of my Rebel Ghar Tectorists from Beyond the Gates of Antares.

BtGoA....you know...that game that I've: (1) never played (2) have in the past tried repeatedly to sell off both in it's entirety as well as in portions (3) and am trying once again to do so now as I'm tired of kicking the box of these around after 3-4 years of not touching them  (4) and know that painted or not, the game locally is pretty much dead (I could be wrong, but when it comes to gaming I don't get out much these days) meaning this 400 point 'army' will likely go back into stasis to not be seen again for who the fuck knows how long.

Another Child of Torment enters the fray


Just a quick post this morning. It was kindova lousy weekend, but I did manage at least to finish the WIP Children of Torment Chaos marine. This brings me up to a whopping TWO finished plus the Helbrute which I bought pre-painted.

Oh well, progress is progress, no matter how meagre it is I suppose. Additionally I started base coating my 2nd Silver Drakes sergeant. I think I'll try and finish him up before tackling the Coyotes' Razorback.
Posted by Da Masta Cheef at 7:17 AM 4 comments: 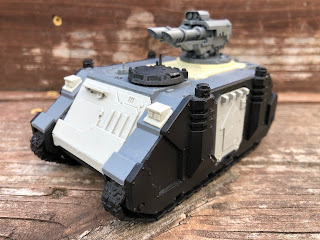 
In amidst the work on the last three Incandescent Coyotes I was distracted many a time which slowed progress considerably. Be it waiting for an ink, or the contrast paint, or a weathering wash to dry, or simply 'I don't fucking want to today' my hobby area is as littered with distraction as much as my mind is prone to looking for it. As such, here are a few of the other things I was dabbling with during that little project.

First up, my Razorback:

Okay so yeah, I've already posted about this previously. Now however it has been cleansed of its Black Templar heritage and is now ready for priming. I took these pics prior to that as primed white models photograph so well...

Originally it was to have a twin-heavy bolter, but I grabbed the wrong drill bit (apparently) and broke/wrecked one of the gun barrels when drilling it out. So a twin-lascannon it is! I guess this will function as a tank destroyer as much as it will an AFV.

Next up, the scout snipers:


More commonly known as the Bane of MY existence due not to the damage they've ever inflicted on my armies, but rather the almost complete lack of damage they've inflicted on other forces whilst in my armies. Seriously, Ever since the debacle of my old Aurora Chapter 10th company army, scout snipers just seem to materialize around here and my dumbass keeps working on them for some stupid reason. They still need to have battlefield debris added to the non-sculpted bases before they get primed. Bleh.

...and then there are the Silver Drakes:


I ordered an easy-build Intercessor 3-pack and got 'em built and primed to hide the Smurfy shade of their bare plastic. Originally I was going to just fill out my lone Intercessor squad, but instead i think i'll just split that instead into two 5-man squads. Telling one squad from the other was going to be an issue as I've dispensed with the squad number decals (being both annoying to apply and practically illegible once the minis are done), and instead have opted for their bolt rifles having scopes in one squad, and none in the other. Easy peasy.

Of course technically those scopes change them into stalker bolt rifles. So were these to actually make it into a game, then I might even consider using them as such since my Drakes lack any heavy weaponry. Currently however, they're all just plain ol' bolt rifles to me.

Finally, let's not forget the Children of Torment:


Jesus, never has an army been so aptly named! These fuckers have so much frickin' detail on them that they're a nightmare to work on!! 'Chaos' by definition does not equal conformity, so this guy's trim is in leadbelcher rather than gold. Hell, I have several metallic colors, so this army will one day be painted in a rainbow of colors (assuming I don't rage-quit the project).

So there you have it, my version of short attention span theater. The razorback has since been primed a snowy white and it...or one rather (maybe?) one of the above will get worked on next. Who knows, could be something else entirely.

The first combat squad is completed! 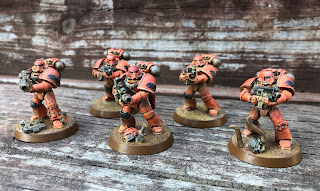 And so a new chapter starts to coalesce...

Indeed my Incandescent Coyotes need to bolster their numbers quickly as they've already roused the ire of the Black Templars. Luckily that particular crusade is waging war in another segmentum, with the vast gulf of the Atlantic space between the two chapters.

First up I had another go with the rust wash that I added to the track links on the meltagunner's base. I really slathered it on and whilst it's a bit more subtle in normal light, under the camera's flash it looks fantastic!

Above the sand wash is dry but not yet blended. Good coverage again after a minimal dry brushing of Vallejo light Ivory. I see a few spots that it looks like I missed when applying the wash (the tail was not washed intentionally), but I've found that it all ought to work out fine during the blending process.

Following this I then painted the bases and hit 'em with a quick matte coat in hopes that when I apply the agrellan earth you won't see the white and orange poking thru the cracks this time (not that the inking won't cover that up). In hindsight, there will be yet another varnish layer as I went ahead and added the sand wash too, and once blended that will come off to the touch unless it is also sealed.

At that point, It was just a little bit of dry brushing on the agrellan and tail, a few final touchups, a final matte varnish coat and they're done!

My next post will feature the myriad distractions that were 'also in-progress' whilst I was working on these three. Because ya know...short attention span and all that.
Posted by Da Masta Cheef at 7:55 AM 5 comments:

Digging thru the ol' bitz box... 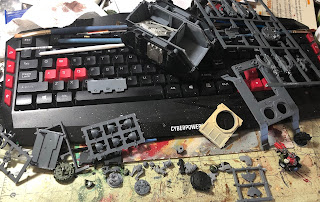 I took a bit of a break from painting to do a bit of destruction disassembly of the vehicle complement that came in the horde that was given to me by Kushial: three Rhinos and a Landraider Redeemer. The redeemer and two of the rhinos are festooned with Black Templar iconography and that stuff just needs to go! I had briefly entertained fielding a small BT force but then had flashbacks of my old, horridly monochromatic Iron Hands army and nixed the idea.

It seems that I don't have any plain doors for the Redeemer which pushes it to the back of the line. I do however have quite a few parts for the rhinos and I set about dismantling and rebuilding those instead. Digging thru my still, somewhat vast array of bitz, I found enough weaponry to expand from one to two rhinos with stormbolters, whilst the third will be a razorback with either a twin-heavy bolter or lascannon (not sure which yet).

I picked up some dirt cheap spellcrow replacement rhino doors as well as a rhino front plate aways back. The doors are resin with molded tactical arrows which look rather nice. Wheres the front plate looks a bit more armored than that of the stock rhino version. As such I'll probably use it on whichever Rhino turns into a Razorback.

Of course any digging in the ol' bitz box for one thing invariably turns up other cool stuff as well. Lots of basing bitz, as well as enough spares to salvage a half dozen scout snipers out of Kushial's horde that needed some help (ugh, scout snipers: the bane of my existence!).

I also found three Space Wolves' wolf tails to use as coyote tails, as per Siph's suggestion. Having so few they'll be limited to squad sergeants and my Lt. Fun Fact: my first ever space marine army way back in 2nd ed was the Space Wolves. I had a 2nd, small Space wolves army since that one probably in 4th ed or thereabouts. SInce then however I've bought none making their bitz few and far between as they so often end up on the bases of my other armies if for no other reason than to taunt Screech and Neverness' armies.

Anyways I hope to maybe finish up these three marines this week. Hopefully I'll get some white primer and then I'll be able to add a transport or two to their ranks as well.
Posted by Da Masta Cheef at 8:01 AM 6 comments: