The (re)birth of a dreadnought...

...yes, just a little over nine months of being submerged in the Simplegreen and I finally rescued my old dreadnought from its chemical grave. For those that don't recall (and that would be all of you), this is what I like to call the original resin dreadnought. For a recap of its history, click here.


Originally, I had intended to clean this old dread up to join the ranks of my budding (now long-since-gone bust) Black Dragons army. However like so many things intended to serve the Imperium, the Alpha Legion stole, or rather is going to steal it. 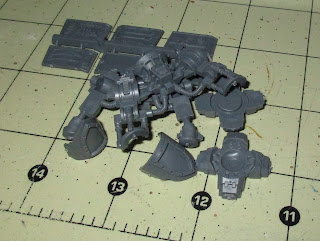 Sure, sure, 30k's got all kinds of them new-fangled (but still supposedly ancient) alternate dreadnought types, but yes the plain old, standard issue Mk IV dreadnought that's in every marine army does have stats in 30k as well. And unlike Kushial who has TWENTY!?!?! dreadnoughts (seriously, WTF man?), this old wreck is the only one that I have.

As I said in my previous post, I did some painting Sunday just not on any spess mahreenz. No actually I finished my Anomala car terrain piece for Infinity (ya know...that game I don't play). In hindsight, I ought to have sealed it with semi-gloss rather than matte varnish but oh well. The Ariadna are kinda like the rednecks of the infinity universe anyways, so oxidized paint on their cars is probably more of the norm than not...


While its certainly not my best painted model, it came out alright I think. I need to give the stencils another go and hopefully it will work out better on the 2nd try. I did get a suggestion on my last post on this subject to not wait until the paint was dry before removing the stencil. Perhaps that'll work...dunno, guess I'll find out when I get around to painting the 2nd car.
Posted by Da Masta Cheef at 6:00 AM 2 comments:

Whilst writing my previous post, I was thinking that I ought to take a pic of all of my finished Alpha Legionnaires together. Apparently I wasn't alone on that as Neverness specifically asked for the same thing in the comments. So as I'm happy to oblige, here it is: 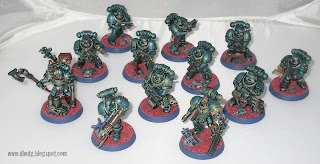 It, it feels like there ought to be more...such is the life of a slow painter I suppose. I did spend a bit of time painting on Sunday but not marines. That said I did assemble my first sergeant who will lead the no-decals squad. He's the next model in-line to be painted (assuming I don't get distracted...).
Posted by Da Masta Cheef at 7:30 AM 7 comments: 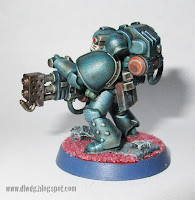 Just a quick post as today showing my (as promised) latest Alpha Legionnaire. This one will go with my non-decaled veteran tactical squad. The heavy flamer came from the new Blood Angels tac. squad box via a bitz seller online. It was a relatively simply weapon and backpack swap, so much so that I'm not sure if it even qualifies as a proper 'conversion'.


My next few Alpha Legionnaires will be sergeants and special weapon equipped veteran marines. I'm hoping they'll keep be busy until the next five Chinese recruits in their Mk III armor arrive. They'll bring me up to two full, 10 man squads and pretty close to the 1500 point mark for the army!
Posted by Da Masta Cheef at 7:30 AM 5 comments:

So, we decided to not do a whole hellva lot this weekend aside from lounging around our house in the blissfully cool air conditioning. As such that resulted in a bit of hobby time, and I painted up the next Alpha Legionnaire in line as well as assembled another to replace it in the painting queue.


It looks to be a busy week as it is my birthday week (my beloved Wolfy insisted I put that latter part in there...). However with a bit o' luck, I hope to have that miniature done in time for my Thursday post.

Took a bit of a break from the 30k bolter grunts 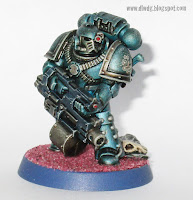 Given my slow one-at-a-time building and painting process, it seems like I've been working on 'em forever. In reality no, I have less than 10 tactical marines actually done (seriously?!?! WTF???). Nope, I ain't got nuthin' on the high-speed painting machine that Mordian7th is, but I am enjoying the process at least. Anyways, given that my troops choices will be veteran legion tactical squads, I switched things up a bit and painted a heavy bolter legionnaire.

Ya know, I've painted probably a dozen or more heavy bolter marines over the years. Hell, I once had a dev squad with 4 heavy bolters in it! All models and designs but this one...this one for the pose alone is the best I've ever worked on! It looks soooo much better than all of the prior sculpts! This was also the first one to get the FW decals added. The ones on the shoulder pads ended up a bit low, but overall, I like it. That and these are of a much better quality than the standard GW decals!

I also finished my Techmarine. There's a saying which says 'the devil is in the details'. Well, if that's the case, then after painting this guy, I've decided to name him el Diablo! Seriously! I don't think GW (or me and my conversions) could have added more detail if we tried! Well, I guess I did actually, as why not add a small generator to his base as well to add some more visual distraction, am I right?

'...even the Space Marines look cool!'

And somewhat shocked at my beloved Wolfy's pronouncement, especially about space marines whom she categorically despises, I damned near drove off the side of the interstate in shock! (I didn't or else I probably wouldn't be typing this) 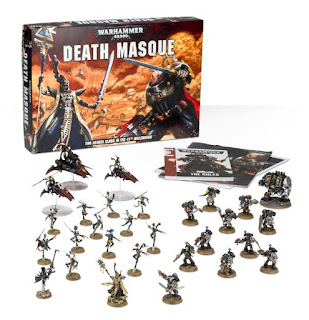 She was looking at the email from GW on her phone for the new Death Masque boxed set, and whilst the Deathwatch marines did meet her approval visually, she would much rather play using the Eldar.

Not sure if we'll get this set or not, but I thought it note worthy to share this little moment that we had Saturday.

No gaming at the FLGS this weekend, instead my beloved Wolfy and I enjoyed dinner at our friend's beautiful farm in the foothills of south west Virginia. Last weekend though, we played round 2 of our 4-player variation of Kill Team. We used the 'king of the hill' scenario where the more models in and around the center objective at games end, the more victory points you got. Here are the cliff notes of the battle:


Welp, my Beloved Wolfy won by a landslide and was crowned Queen of the hill! We didn't even bother to tally VPs up. Once again fun was had by all we look forward to more kill team games in the future.
Posted by Da Masta Cheef at 6:00 AM No comments: