The muppet-Tau auxiliaries have not only their first painted mini, but their team leader whom I've dubbed Shas'wut?

Here, check him out:

Originally...I had thought to maybe use this mini as a Demiurg or...something. Well fuck it, Muppets come in all sorts of improbable shapes, sizes, and colors right? Right.

Thus, rather than a Demiurg, this is just a short, round Jaloof muppet (doubt I'll much call 'em the Jaloof anymore as I only think 'em muppets) in a stealth suit which is obviously turned off since it bears no resemblance whatsoever from its surroundings...

After a few attempts, I gave up trying to come up with anything that looks exactly like a burst cannon or fusion blaster, however I was able to add two parts from the latter and figure that'll just have to do. In addition to the fusion blaster there's also a helmet mounted markerlight and possibly the only one that'll be in my team...dunno, will see I guess.

I've not matte varnished this yet as its 20ish degrees (F) outside with snow flurries currently. Following that I'll add some 'ard coat to the markerlight's lens, the cold, dead soul stones on the base, and the visor on the helm. Speaking of...I made a hopefully not feeble attempt to replicate Dwartist's HUD effect on the visor. Not sure if it worked or not, certainly not as good as his, but not a too half-assed attempt I hope.

As with my Silver Drakes, I put together a customized Kill Team data sheet for both the mini above as well as my other muppet auxiliaries: 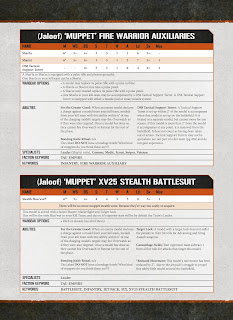 Point values will again remain the same as standard Tau. Really all that changes are a few minor handicaps to their stats to better reflect the models themselves, along with a few little bits of humor.
Posted by Da Masta Cheef at 5:00 AM 4 comments:

The struggle is waning...

Well, with the latest and hopefully final paradigm shift (for awhile anyways) having now passed. My Beloved Wolfy and I are settling into our 'new normal' once again. One particular boon of this latest change is the return to a consistent, daily chunk of time that can be easily used for hobbying, huzzah! As such, I was able to finally finish up my Renegade Iron Hands/Blackshields fire support squad:

Now along with my Medusa, both of my two heavy choices are painted, I'll next turn to that woefully neglected portion of my 30k force org: Troops!

On the Kill Team front: after another two games my Silver Drakes remain undefeated, though admittedly, the last game was won by only the slimmest of margins! Whilst the realization that my marines have a WS/BS of 4+ continues to throw my opponents for a loop, it luckily hasn't proven to be too much of a hinderance to me.


What will hurt here shortly is the rising point costs associated with going up in levels! I have a 7 strong team, leaving one extra to fill in for whomever is convalescing. However I'll only be able to field 5 at best now, or possibly just FOUR! (gulp)

On the bright side though, I took out Matt's level 3 Genestealer Cult Aberrant team leader! Yup, he's dead Jim. Appropriately enough, Matt's morale resource value is now the lowest in the league!

My Daughters of the Burning Rose Kickstarter pledge

Well that was a hellacious week...with no hobbying whatsoever aside from putting together the base in my prior post.

All was a blur, so I'll just skip forward to Friday morning. Whilst making my morning chai latte (aka: a massive jolt of sugar and caffeine) in my cube, I was checking email and praying the day would go easily by (and no, those prayers were not answered!). I did see at least that I got the pledge manager email from the Not Sisters of Battle, the: Daughters of the Burning Rose kickstarter.

I've never made a purchase from Anvil Industry before except for my Grymn Mortars I got on ebay for next to nothing. That said, most of the stuff on their website is drool worthy, and I've wanted to buy lots from them over the years! Thus, I was at least able to enjoy my lunch hour as I perused the pledge manager and built my minis.

Anvil's modular designs allow for everything from pseudo SoBs, to medieval-esques armored women with crossbows, to the Adeptus Mechanicus-looking militia that I've assembled for my pledge. They'll  accompany my Tech Priest Dominus, and be allied to my Renegade/Blackshield Iron Hands (in the event that I ever play 30k again). Regardless, they'll be a fun addition to a (very) slow burn side project and as an aside, the only actual army I'm working on. Everything else is just Kill Teams.

Not sure what the actual ETA for shipment of these is, but all of these particular minis are already in production, so hopefully it won't be too far down the road...
Posted by Da Masta Cheef at 5:00 AM 11 comments:


Hobby time has unfortunately been at the minimum here of late, too much adulting going on. In fact I only just put the decals on my renegade Iron Hands Sunday evening, inking them last night. Whilst those were drying, I set about positioning the bitz I purchased for the base of my 'nid kill team's Tyranid warrior leader from my previous post.

When all is said and done, the escape pod will have the hatch attached and like my Silver Drakes, this too will be a snow base, with the skeleton half covered with snow flock, whilst the pod have snow collecting inside.

I also bought two primaris helmets to decorate the bases of a pair of Termagants who will serve as specialists. While you're allowed up to have up to three specialists, Termagants are limited to only having the scout and veteran specialist abilities. Thus, I'll see if one of the local 'nid players have a genestealer that they can spare to flesh out my roster with it's third specialist..
Posted by Da Masta Cheef at 5:00 AM 4 comments:

Little gribblies rejoice! Actually no, just scurry forth into our enemy's prey's guns!

I've been on the ol' eBay hunt for a Tyranid warrior to lead my hive fleet Ouroboris kill team for awhile now. Whilst I think the current warrior sculpt is by far the best incarnation from over the years, to get one unassembled on eBay clocks in at about $21! What the fuck? That's almost half the cost of a box of 3!

Then of course there are the pro painted  (lol yeah, without a doubt!) and/or the poorly assembled varieties both which often go for far less, but also look as though you'll need to strip/disassemble, and rebuild them once they arrive due to abysmal painting/posing of the minis.

I only wanted one, and only wanted to spend about $10 on it. So, I opted to get an older metal model for just that price! It works I suppose, especially as I also have the old termagants and (quote):

"Encounters with Ouroboris have revealed that the organisms spawned by this Hive Fleet contain cruder, primitive versions of common Tyranid bio-weapons and organs." 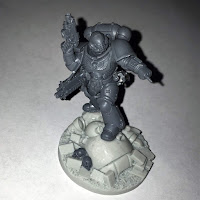 Or in other words: they're the obsolete bugs.

Ultimately though I ended up spending a bit over $20 in total for this as I wanted it to have a really cool base (being my only 'big bug') much like it's Silver Drakes Sergeant counterpart. I'm pretty sure that Tyranid warriors go on 40mm bases, but given that it'll be a bit more like a little diorama, I'm thinking it'll probably end up on a 60mm base.
Posted by Da Masta Cheef at 5:00 AM 4 comments: 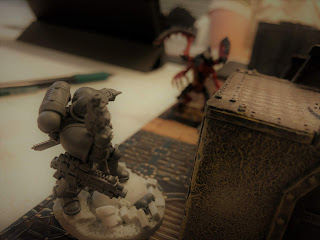 My Silver Drakes have finally turned the corner! I figured out what it was, that was the cause of my abysmal die rolls: My Beloved Wolfy wasn't present to bless my dice with her mystical powers! I came to this realisation after she did just that this past Saturday evening, and my Silver Drakes went on to rack up two consecutive victories, huzzah! So pleased was I with how well my dice were rolling that I didn't think to take but a handful of photos. Oops.

First up, my marines sought out their Adeptus Mechanicus allies commanded by my buddy Scott, to seek their guidance in combating the Tyranid menace. However that rendezvous fell apart when, upon first contact, a skitarii armed with an arquebus took out my AGL specialist with a brutal headshot (literally, the strategem used was called 'head shot').

Enraged, my sergeant took out the verminous gunner with a head shot of his own, and demanded his traitorous counterpart's head on a pike! Engaging in an assassination mission, my Drakes avenged their fallen brother with extreme prejudice!

Well...except the new guy. With one grunt resting at the convalescent home, my new and literally green recruit ran right up the center only to be taken out next by a rapid firing plasma gun. Ouch. Demotion ended the game though when he took out the Skitarii leader with his stalker pattern bolt rifle despite being both on the move, and his target being snuggled down in heavy cover!

'Twas a good game vs. a fun opponent I haven't played against in years. All marines made a full recovery, though one of Scott's 'nameless grunts' died of his injuries.

Following that, Screech's Tyranids returned for another round, and with the dice rolling hot, my Drakes were eager for a rematch! Things started off well for me when the first Hormagaunt kill came via a scouting phase deployed trap (first time that phase has resulted in anything thing for me). He would lose another gaunt to a booby trap later in the game as well.


Everything went pretty much my way, other than my Sgt. falling in close combat with his lictor, and Demotion being taken out via a venom cannon round. That injury was sufficient to cause him to miss my next game. Whereas Screech had all but his lictor need to roll on the recovery chart at game's end. Several bugs were to report to the convalescent...uh...something. Don't they just digest the wounded and birth new replacements? Well, its something like that I guess...

Anyways, I'm now technically in the lead with all full resources however I'm so many games behind that I figure my team is a guerrilla force at best. Eh, so long as I have the game all the way figured out by league's end, then I can call that a 'win'.
Posted by Da Masta Cheef at 5:00 AM 2 comments:


...just to break up the monotony.

Notta whole lot else going on though, just another busy week. Saturday I'll get in another round with the Silver Drakes and hopefully...well maybe, I'll finish these guys off soon as well.
Posted by Da Masta Cheef at 5:00 AM 2 comments: