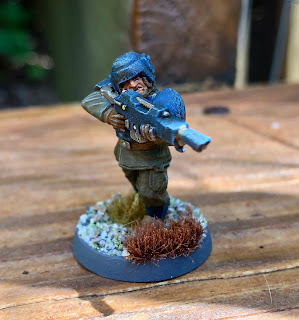 It's been a month since my last post, probably the longest gap within the lifespan of this here blog. That's not without good reason though, I've been in the process of moving. I lived in my prior house for just short of 20 years and ya know, its amazing at just how much stuff you can cram into such a little house over that time. As such it feels like I've been moving for a month solid! Boxing, sorting, trashing, moving, rinse & repeat.

Now that we're in our new house (my girlfriend fiancé and I are selling both of our homes and bought a new, bigger one), the dust is starting to settle but damn! There's so much stuff and it's EVERYWHERE! And yes, there's still stuff to retrieve from our old homes (though we're both down to the last, final dregs).

In the evenings when packing, I'd stop around 9-9:30pm or so (sometimes later) and paint a bit. The guardsman above and his 2 squad mates below were the results of those meager endeavors, and constituted the last minis painted in my old home. These will be part of a small contingent who will be allied to my Smurfs. Thus they have been based in the same manner as my Ultramarines. 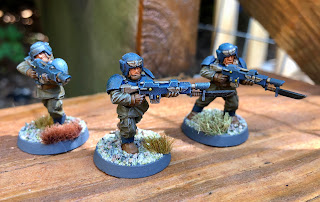 These are the first of no doubt many photos to be taken on the steps of my new home's deck.

I got them cheap off of eBay, and sometimes ya get what ya pay for. The priming wasn't done in ideal conditions apparently and is kinda grainy. Mold lines weren't addressed (and I was too tired to notice until these three were done), but whatever. They work. 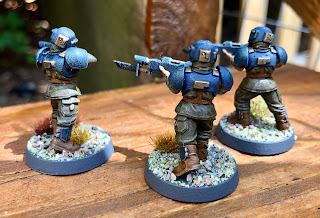 As Zzzzz would say, these guys aren't CESFW (Carrying Enough Stuff For War). No worries though as I've worked that into their backstory which I'll flesh out at a later date.

Their small combat patrol contingent will be lead by an Inquisitor that Neverness gifted to me the last time that I saw him, and I'll have more on that rage-inducing bitch at a later date. For now though, I'll see if I can't scrounge the same meager snippets of time to paint up the rest of the squad (only unpacking this time rather than packing).

Speaking of, my fiancé suggested I take Frankie to the FLGS for game night this evening. He's been all over that idea all week. I on the other hand have only located a few of my boxes of gaming stuff in Mt. Cardboard in the basement, so no guarantees that we'll be able to accomplish that (likewise my gaming table is similarly buried). 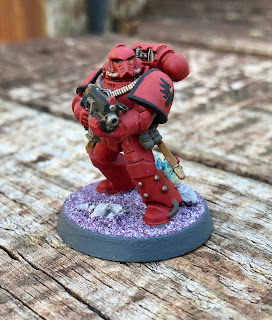 I googled purple sand (which was recently discovered in a coffee can buried in amongst the clutter of my little home) and the first thing to pop up was surprisingly a beach in the Big Sur region of California.

Speaking of recent discoveries, I also found this poor bastard (probably one of those gifted to me by Kushial) immersed in Simple Green in a container tucked away in a cabinet the other day (found some Guardsmen too, but haven't rescued them yet). He looked to have been primed white which strikes me as an odd crime for such a punishment but whatever. As you can see he has since recovered. 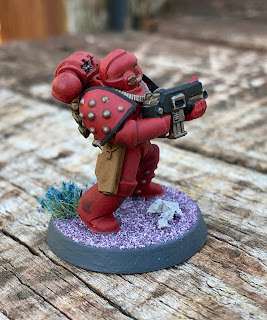 I believe this guy was originally intended to be an Incandescent Coyote.

As we all know, there's a new version of 30K coming and I thought I'd try and give it another go and maybe even manage a full 20-strong tactical squad (for once) this time around! That said, I didn't want to recreate a previously painted army and...well in the past I've fielded quite a few of the original 20 18 Legions. Those past armies include:

Ultramarines (and still have them)

Not sure if I can say Luna Wolves as instead it was the Black Legion...

...and yes, I've apparently flirted with the Blood Angels as well managing 2 whole minis before giving up (you can imagine my surprise when I went to tag this post only to find that the Blood Angels were already in my list...damnit).

Anyways, to that list I'll now add the Blood Angels (also v.2). Using the same, stupid simple color scheme methodology as I have on my Tau (only without all the grime which does not hide all of my mistakes as these pics will show you...). As such I cranked this guy out over a few evenings after I gave up on packing up my household stuff.

I ordered a few bits to kit him/them out properly with a bolter, bolt pistol and combat blade. I also picked up a few chapter legion specific shoulders pads, though this guy isn't sporting one of those as they were still enroute at the time. 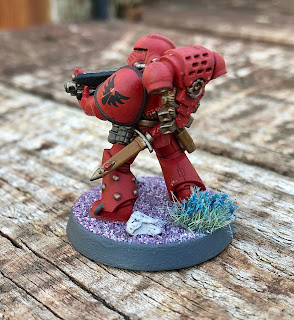 Ugh! The camera sees so many tiny mistakes that you honestly can't see (with my aging eyes) in real life!