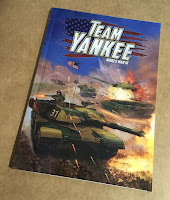 With 40k purchases on infini-hold following the release of 8th ed, I've gone looking elsewhere on what to waste my hobby $$$ on. 15mm gaming still intrigues to me despite never having ever played anything in that scale. With the demise of my Gruntz army due mainly to the confusing ruleset, I've still been looking about and picked up Team Yankee's little rule book (a close kin to the 40k variety) for the cost of shipping alone ($7) from the warstore.com.

I haven't had time to dig into it yet as the past week was quite busy including a trip to South Carolina for a wedding. Additionally, yesterday's hobby time was largely consumed with boxing up Bob's cheddar Grey Knight army to be deployed to its new home in Arkansas. Indeed bubble wrapping 20-30 super pointy minis takes far longer than one would think...

That said there's no rush to read it I suppose. Forget the lack of any known players locally, rather $900 spent in unexpected vehicular maintenance this week has more or less eliminated any hobby purchases for the foreseeable future.

The pitter patter of little feet…

A little ways back Ral Partha Europe had a ‘flash’ (read that as: impulse buy) sale. I’m a sucker for such things and made a purchase in the form of a blister of Davion Infantry and some Heavy Hover APCs to haul ‘em around in. 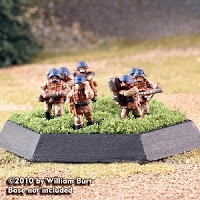 This photo is straight from the Iron Wind Metals site (same minis, different distributor) as photographing microscopic unpainted minis seems kinda like a pointless exercise to me. I already had 5 plastic hex bases to glue them onto, but given the total number of minis (84 on 3-man strips) I may need some more bases. Especially as it looks like I can fit 8-10 individuals on each hex base.

As for the APCs, whilst they like the infantry really weren’t any cheaper than just buying them from Iron Wind here in the USA (the price was comparable due to the sale), Iron Wind packs the heavy APCs at 2 to a blister (though after a look around their store, they may not be selling them currently), Ral Partha on the other hand puts 3 to a blister. So it was a free tank in exchange for almost a month-long wait. Well worth it as playing CBT isn’t a high priority anyways.

As for fielding these tiny little guys, infantry platoons come in wonderous variety! Ranging from OMFG they can do WHAT?!?-all the way to the other end of the spectrum of-these are so useless, it makes you wonder why the fuck they even bothered? Also, given the varying transport weights to coincide with the variety already mentioned, the three APCs will be able to carry anywhere from a company to a full battalion!

Visually however, they’ll all look the same because at that minuscule size, you’d get eyestrain trying to differentiate one type from the other rather than just use a generic mini like these.
Posted by Da Masta Cheef at 5:00 AM No comments:

The weekend after action report

Just a quick post this morning as I rub the sleep from my eyes whilst awaiting the caffeine to kick in.


Saturday night Wolfy and I got in another Kill Team free-for-all with Bob and Mike (another new guy). Caught between a Dark Angels crossfire (we assume one side was fallen though neither was claiming that title...), the Fem Fa'Tau flailed away in one corner with impressive volleys of fire matched with abysmal die rolls. Her new toy the frightening DS8-support drone named FU-M80 also made its battlefield debut.


In my corner the Rainbow Warriors once again turned in their standard performance of 'at least I didn't get tabled' though as usual it was a close run thing. T'was a fun game with Bob stealing victory from the Tau in the bottom of the last tun following a long, drawn out (and for his Dark Angels embarrassing) close combat fight.


Lastly, yesterday my beloved Wolfy and I attended a local music festival, mainly to see one of my favorite bands: Southern Culture on the Skids. Their albums are okay to listen to, but they're fantastic in concert! Also, I don't recommend wearing anything too nice to the show as its not a proper SCOTS concert until the fried chicken and Little Debbies start flying thru the air!
Posted by Da Masta Cheef at 7:36 AM 4 comments:


Aways back, I ordered a single 'fantasy pirate' (which just happens to have the same build/stature of a Grymn) from Hasslefree minis. This order took what seemed like an inordinate amount of time to arrive, but given that (1) toys are rarely a high priority when it comes to necessities and (2) they generously sent a second, free mini as compensation for the delay, hell...if anything I encourage them to be late every time! lol, yes they're still my favorite mini company in case anyone was wondering. :-)

He'll be a Rogue Trader (force commander) leading the Outremar contingent allied to my Salamanders. I have a little fluff write up for hm already, but will save that for when he's all painted up.


The gifted mini was the companion pirate to the one I ordered. As you can see, I already had one of these painted up as Myr'dok for the G-Team for Rogue Stars (you know, that game I like making crews and back stories for, but don't actually play...). So I'm not sure what I'll do with the freebee just yet. Perhaps my beloved Wolfy or Hoss will want her for one of their RS crews or something.

Still plodding along on the 30k front... 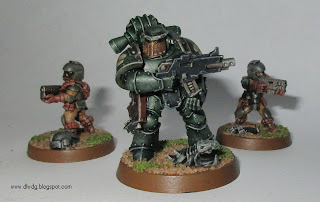 These three are the latest painted editions to my 30k Salamanders & Outremar (Imperialis Auxilia) army. Nothing fancy, just a bolter grunt along with two lascarbine grunts. One thing of note is the Iron Warriors debris on the Outremar bases. 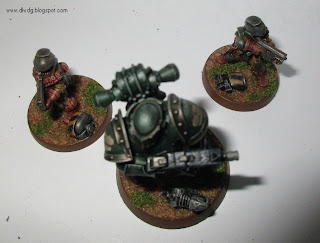 Whilst armed, armored and capable of killing a marine or two (total, per game...for the entire allied contingent), they're hardly frontline troops. Instead they're more like a rear guard*, mopping up after the Salamanders, dispatching enemy wounded, and salvaging what they can to help the Salamanders replenish their woefully depleted stores of equipment.

*Which explains why they're not mentioned in the linked bat rep above.
Posted by Da Masta Cheef at 5:00 AM 6 comments:

The Fem Fa’Tau revamp is underway!

For those of you wondering what happened to Monday’s post, it was a holiday. Like all good holidays I took the day off (and pay no attention to Neverness who is posting blog posts whilst away on vacation. Clearly he’s vacationing incorrectly!).

As mentioned previously, I’ve begun hobby-recycling a portion of my Beloved Wolfy's Fem Fa’Tau via ebay, and as such the metal pathfinders and stealth suits are currently redeploying to their new Cadres in Kansas and Virginia. Their departure funded the addition of a new breacher squad, and a replacement plastic stealth suit though we’re still hoping the missing one will turn up eventually.

I also painted another Fem Fa’Tau fire warrior, the first in what seems like ages! Unfortunately, the current Xereus Purple is a shade (or three...) off of the whatever GW’s now obsolete purple paint was. Whilst annoying, I've only painted one stealth suit, one fire warrior and the Piranha crew with that old color. Considering that I still have a bucket load of Tau that need paint of their own (and more on the way), repainting those few minis to match the current shade won’t be happening. Period.

Next up for redeployment elsewhere will be the old, original broadsides as well as the never used twin-fusion blaster crisis suit. These will (hopefully) fund a new squad of plastic pathfinders. Following that purchase, just about the only thing the Fem Fa’Tau will need are paint jobs. My plan intent for that is for every other mini painted to be a Tau mini. That ought to break things up a bit along with giving this long neglected army some much needed color!

****
Also, for those of you here state-side that are interested (sorry, but international shipping is too expensive to bother with anymore), here are the Broadsides and Crises suit, as well as Bob’s Cheddar Grey Knights.
Posted by Da Masta Cheef at 5:00 AM 7 comments: