Trains, (no planes) and Automobiles

For those who don't get the title reference click here.

My Beloved Wolfy and I skipped town for a weekend to go and visit her sister and brother-in-law in Nashville, TN. Its an easy 5 hour drive (unless its pouring rain the whole time in which it was a miserable 7 hours back on Monday). They were nice enough to advance our birthday presents and put us up in a hotel suite that was well out of our price range (birthdays, anniversary, Christmas...and any other special occasion they want to lump in there is fine with me!).

On Saturday we spent most the day at their house just chatting about whatever, but eventually Wolfy and Mandy wanted some 'sister time' and so I accompanied Micheal down to his hobby room where he showed off his latest model train work-in-progress.

Completely different from the last time we visited, and nearly twice the size (if not more), I was truly impressed! Indeed, I was drooling so much I took far too few pics (hell, should have taken some videos of the two separate switching stations in action). He also gave me a primer on the use of weathering powders which he is a big fan of and I've been meaning to try out.

We also discussed the advances of 3D printed terrain, and swapped manufactures that we like for potential future purchases. Whilst discussing the hobbying points, I pointed out that his work station was too terribly organized and offered to destroy it to be more in line with mine. Curiously he declined the offer.

So whilst the girls had their time we geeked out in the basement. Here's the few pics I did take:

On a different note...for several years now I've had a penchant for hiding minis in family members' homes. My grandparents had gotten the lion's share of these endeavors (it's good to keep em' on their toes), though my mother and father in-law have as well. Whilst my grandmother treats it as a game that she pretends to not like (whereas I'm pretty sure she does), Wolfy's folks have proudly displayed their mini since finding it a few years back.

As such, I felt the need to leave behind a deep cover operative (the pink haired mini from that ill-fated project) in Nashville. I had hoped to hide it in the train set up, but was never able to be left alone with it, thus I found another location within the home. However given how immaculately clean their house is, I fret that she will be located all too quickly... 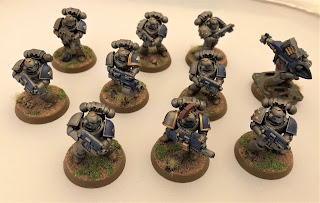 Curiously (or is it sadly?), these are the most marines of a single color scheme that I've had since my 30k Alpha Legionnaires (who in the end only clocked in at a whopping 13 minis total) and the most of any single squad going all the way back to my......Storm Wardens (circa 2013-14).

Yeah, wow. Consistency, it's not my thing apparently.

Anyways, back to the present.

In the end, this squad was kinda fun to paint despite how much I normally dislike batch painting (even small batches of 3-4). At least at this point I'm not loathing the prospect of painting more of 'em.

The squad's leg greaves are rather muddy meaning the squad at some point had to wade across a flooded trench, gully or the like which lead to the curiously dirty state of one battle brother in particular:

We're not quite sure what exactly it was that caused brother Lucius to fall bodily into the muddy water.


Was it a hole unseen beneath the murk? Perhaps the shock wave of a nearby explosion? Or was it just an opportune shove delivered at just the right moment by one of his malicious brethren?

Its hard to say, but squad comms have been unusually quiet ever since the trench crossing...'incident'.


The battlefield debris on their bases is a bit inconsistent, but in the end won't really be noticeable. The first few had Eldar bits added to their bases as those were readily available without any effort required to sift through my pile o' spare bitz. That said, the Astral Claws were previously tasked with containing the Maelstrom's renegade and Xenos scourges meaning Eldar debris isn't too far off of the mark. Perhaps the Eldar were simply raiders or traders who mistakenly wandered into yet another Space Marine conflict

The Executioners' chapter Rhino door, partial hatch and helm are in line with the Badab war background. Whether or not they were friend or foe at this point is unknown. Executioners aside, the squad sergeant has a half buried helm of one of his fellow sergeants on his base and in true 40k form, human skulls are  sprinkled throughout.

Overall I'm quite happy with these guys (shitty photos aside), so keep an eye out for more Astral Claws in the future.
Posted by Da Masta Cheef at 5:38 PM 3 comments:

I had a marathon painting session Saturday (well, by my meager standards at least) and got the last four members of my Astral Claws' red tactical squad painted up to the 'ready for decals' stage. Decals will be applied later on this evening, and once dry these will then be slathered in ink. Wednesday evening I'll hopefully have time to do their bases, as well as applying the mud/grime to their legs and in doing so my first tac. squad will (hopefully) be complete!

That's the plan anyways. As you all well know, I rarely am running on the rails...
Posted by Da Masta Cheef at 5:00 AM 2 comments:

In and amongst the slow crawl of progress that is my painting queue, I've been repositioning several of the characters that I got from Kushial. Mostly this is just a straight replacement/swap of the arms and weapons, but occasionally the head as well. Whereas in the case of the captain there in the center, he is an amalgamation of several minis along with some bits poached from my meagre collection of spares.

A little battlefield debris has been added also (mostly skulls). Indeed, the last four bolter grunts needed to complete my first Astral Claws tac. squad received basing skulls/bitz as well, however as they're now primed black they don't photograph worth a shit.

One thing of note: the two Forgeworld Apothecaries are REALLY cool minis that I've always wanted! That being said, I'm using the Chaos codex for the Astral Claws meaning they have no place in the army. As such those two as well as that captain with be siphoned off with some other extras that didn't fit in with the claws for a second small Black Templars army.

Come on...you didn't really think I'd paint all of these in the same colors did you?
Posted by Da Masta Cheef at 9:01 AM 4 comments:

It took awhile (due mainly to distraction) but I have three more painted tactical marines for the Astral claws. It all went much the same as the first three with the exception of the missile gunner's base which features a door that has been blown off of an Executioners chapter Rhino. For those wondering, The Executioners initially fought on the secessionist side during the early-to-mid stages of the Badab war, though only to honor a long-standing blood debt to the Astral Claws.

Savage and unpredictable when on the attack, the Executioners fought both honorably and on their own terms much to the irritation of Lugft Huron and the Astral Claws. Eventually they turned on their allies in the so-called 'Red Hour' after the Astral Claws violated their honor/terms during the surrender and capture of a Salamanders' vessel. Following that, for a brief time the Executioners fought both loyalist and secessionist alike in their own private war before leaving the conflict altogether.


The Executioners use different color pauldrons to denote unit types (ironically, FW seems to have dropped this for their Badab war books), with green representing tactical marines. Originally this was to be a Raptor's door, as I (quite mistakenly) thought that I had Raptors decals. I did have quite a few double headed axe icons though and so to the Executioners this door went.