SCHULTZ! has commanded Da Eleet Grot Mountin' Duvishun ever since he lead the charge in which my grots earned that title. That game, way back when, was a Kill Point battle vs. the nids. After some outflanking genestealers obliterated my Killa Kans, da grots lead by an enraged SCHULTZ! repelled out of some ruins and suicidally charged the stealers! Despite heavy casualties, THREE FULL TURNS later the hive mind redirected some hormagaunts into that particular fray to avoid losing a kill point! And thus Da Grot Duvishun's legacy was born.

Since then SCHULTZ! has (for the most part) dutifully lead Da Eleet Grot Mountin Divishun, including once in its entirety (200+ grots) vs. da lil' lions of 'arlek. In that epic blood bath he took on the mantle of Ork Warboss (I don't recall who won that one, only just that da duvishun was reduced to its usual number by game's end).

SCHULTZ!'s other most notable action came when he lead yet another suicide charge into some Deff Wing Termies who had tellyported into da backfield and were running amok!

Despite Da Grot Duvishun's valiant (yet feeble) assault, no Termies were injured for the loss of all of the grots. However rather than let da oomies run amok once more in their following movement phase, SCHULTZ! laughed in the face of his impending doom and rolled a snake eyes for his morale test, pinning them in place (but not for much longer)!

Anyways, in his last few battles, SCHULTZ! has fought as a regular slugga grunt and one of my weedy spanners who has a squighound on his base has assumed command of da Grot Duvishun.

As such, SCHULTZ! got a minor, partial repaint and will now serve as the nob of my small Kommandos mob. True, he's no bigger than the other kommandos, but he's gotta fancy coat, hat and iz a proovin',  kunnin' leader!
Posted by Da Masta Cheef at 5:00 AM 2 comments:


Around the first of this month, another over-due kickstarter finally bore fruit and delivered its promised miniature. I still find it funny when I go to the Kickstarter website, it tells me I still need to complete my survey for this mini. That and I got a shipment notice from Hyacinth Games two weeks after it arrived.

Its for the Wreck-Age game (which I know nothing about other than it has a post-apocalypse setting). It came a pair of huge (go figure) machine guns to mount on the hood, but...they looked like something off of a world war one biplane. Yes, because those are common in the modern day much less post-apocalypse. So into the bitz box they went..

Really the only complaint is the lack of wheel wells on the car. There's literally no suspension travel available. Though I figure that that's less the result of being a pre-apocalyptic Tuner, but rather because its an old econo box who's suspension is shot due to the excessive weight of its Hillbilly armor.
Posted by Da Masta Cheef at 5:00 AM 5 comments:

Seriously what the hell?

Oh, I know I said. I'll put aquilas on 3 sides, and then paint the feathers in a rainbow of colors! Sure. Sounds great. Unlike the marine's pauldrons there's no edges to help hold the bristles in
line, instead all that's needed is a steady hand. I can do that
right?

But it was a fucking nightmare to actually do! And of course after accomplishing that feat from hell, there comes the fact that this is the last surviving tank from a dying chapter. One whose last few marines have more important shit to do (like surviving) to not bother with cleaning the grime and filth off of the hull. As such, said filth obscures about half of the detail on those rainbow-painted-aquilas (which in hindsight might not be such a bad thing given my sloppiness).

Anyways, the damned thing is done barring the clear coat (which I'm out of currently). I like it. Its filthy yes, but that's my usual preference for tanks anyways. So I guess for the Rainbow Warriors its onto either some more tactical marines, or else Primaris Lt. Budderbarz.
Posted by Da Masta Cheef at 5:00 AM 5 comments:

Notta whole lot of progress since my last post. Mom and Dad were both in town, which is an exceptional rarity. That said neither got within a half mile of each other (though not much more than that...lol). 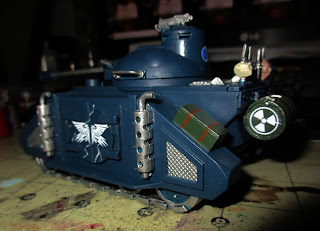 Anyways, with the 'fam' in town, hobby time was at a minimum. I managed at least to add the lightning to the front plate and doors, followed by GW's 'ard coat. Once dry, I added the decals. Normally the application of decals is a profanity laden affair, but in this case I managed to apply all 10 without any issue what-so-ever. A feat never to be repeated I'm sure! 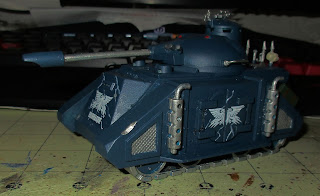 Next up, I need to paint the aquila feathers in a rainbow of colors I guess. Yeah, that ought to be 'fun'.
Posted by Da Masta Cheef at 5:00 AM 2 comments:


Previously its been painted who knows how many times (at least 4 or 5 I'm thinking, one atop the other with no stripping in between). Then I sunk it in the simple green for a year and a half, scraping the resulting muck off only to start and stop painting once again, mid-project. Then I shelved it for another 6 months or so. However, now my ancient predator (my first ever GW purchase) is getting repainted yet again!

When we last saw this venerable old wreck, it was bearing a partial Alpha Legion scheme for 30k. But...I didn't much like how it was turning out (seems what works on infantry doesn't necessarily translate to vehicles) and then I sold that army rendering the paint moot. I pondered selling it, but instead opted to repaint it (per tradition), this time in the colors of my Rainbow Warriors.

Currently its kinda plain and I think I'll keep it that way, opting instead for the usual grime and filth to be added after decals. As for those, I'm thinking of lightning streaks behind white aquilas (will have to root thru the decal collection to see what I have), maybe with rainbow painted feathers.


Will see, but its proceeding nicely so far...
Posted by Da Masta Cheef at 5:00 AM 7 comments:

Gettin' back on the wagon...

Wow. Two weeks? Hell, I didn't even take that long off when I got married! As far as I recall (too lazy to bother looking it up), that's the longest break in posts that this blog has ever had. So. What have I been up to?

Well, to be honest...not hobbying.

The first missed post was due to the scouring of teh interwebz in search of a reasonably priced getaway for my Beloved Wolfy and I's 2nd anniversary. For some odd reason, I assumed that posting the comparative Kayak.com results for virtually every destination in a 3-hour driving range wasn't blog worthy, go figure.

Following that frantic last minute search, we made a decision and then enjoyed a few glorious days in the nearby Kentucky Mountains!

Following that (and I mean immediately...as in just a few hours after we arrived home: NURGLE ATTACK!!!!

Luckily (I guess?), due to Nurlge's frequent predations, we were loaded to the hilt with medications, both over the counter and prescription and I counter attacked with a vengeance! In the end, the battle came at the cost of 1.5 days of 'vacation' time (we don't have sick days where I work) and about 72 hours or so of sheer misery.

Now, when I only occasionally cough (merciful that that is...) my entire torso still literally aches (its closer to agony if I'm honest) from the recent memory of the coughing nightmare earlier in the week.

During that bit of hell, the only vague sort of hobbying I managed was to watch a 2.5ish hour long, 8th ed bat-rep on youtube at Neverness' recommendation. Watching two friends play a game, even one I don't like is easily entertaining. Ya know, playing peanut gallery and all, but watching to guys on youtube? Not so much. At least the Ork player was kinda Orky (Ork players know what I mean), whereas the Marine player spoke in the same monotone voice though out.

I'm still not impressed with 8th ed's rules/game play either, though I do really like the Primaris minis, well the basic ones anyways. The Intercessors (even though their name sucks), Hellblasters and the Lieutenants. As such I figure I'll give it a go for the only applicable force I have, the Rainbow Warriors.

Lieutenant Budderbarz has already arrived, and I only need another five Primaris marines with no upgrades (starter box minis basically) to make a 500 point army which is enough to fuck around with 8th ed for awhile, so that's doable. I've already written up and am tweaking my fluff for the Primaris...uh...transition for the Rainbow Warriors.

Now hopefully I'll get back to posting regularly once more.