To battle once more! 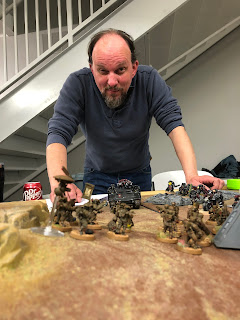 Not sure what's more ominous, the approaching Deathwatch marines, or Neverness himself looming above them!

There's been VERY little hobby time here of late. Indeed, I didn't stop working around the yard/house, and on packing stuff up last night till I realized it was a quarter to 10pm! That's been about the norm here of late.

The closet of doom, normally so loaded with gaming paraphernalia that even my long arms can barely reach into its depths, is almost entirely boxed up. Found all sorts of junk in there i didn't know I even had...or wanted really. 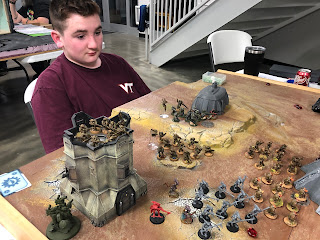 Note his eyes, glazed with confusion....

That said, I did skip out on my real life responsibilities to play a game of 40k with both Mike and Neverness.  Also of note, this was my GF's son Frankie's introduction to 40k! Which slowed things even further down than just 3 players who are always very rusty on the actual rules to the game. 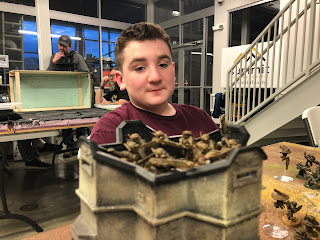 Much like Screech was at that age, Frankie's inclination was to sit back and snipe. As such the pulse rifle equipped Fire Warriors in the tower were his favorite unit.

Neverness will have a battle report forthcoming, so watch his space for that!

Objectives secured and a bit of nostalgia. 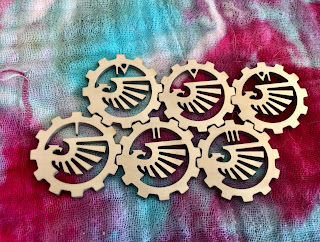 You can buy these here.
They will likely be my last eBay purchase before I move. Sizing up at about 40mm in diameter, 1/16th to 1/8th thick, laser cut brushed steel, yes they're a bit pricey but oh so nice! I went with the generic Aquila design, because the Tau markers were only 30mm in diameter and 40mm is the 'official' objective size. 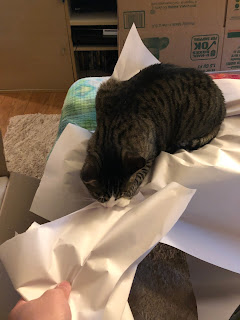 In other news, packing has commenced and as such my house looks like a warzone. Indeed even my Space Marines are packed up as are the majority of my Orks, Eldar, Bolt Action, Star Wars Legion, and some other bits and bobs. Yet is still looks like I've hardly put a dent in my gaming collection. 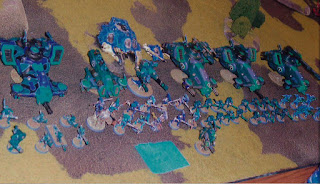 The falcon was a terrain piece, whereas that Piranha was the old Forgeworld model.

I also unearthed some old photos whilst sifting thru the menagerie. The above was my last fully painted Tau army circa 2007. This was taken at Gamesday Atlanta's 40k fiasco Grand Tourney (the guy that ran it every year was woefully unqualified). As usual, I placed somewhere in the middle of the pack, though the GW painting judge really liked my army despite not having a display base unlike my opponent for that round. Speaking of... 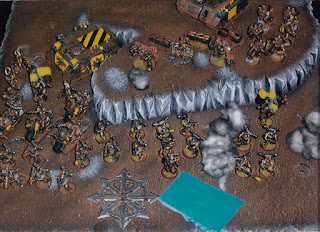 Said opponent was none other than the alarmingly young (16ish I think?) Robert Baer of Spikey Bits fame! At the time he was still making waves at GW with his Bitz selling service. We first saw him in line passing out catalogs at the tourney registry where he excitedly let us know that if we called to order then we'd be able to talk to a girl (his sister...lol). The boy was clearly aware of the socially awkward gamer stereotype and working that angle for all it was worth!

Anyways, back to the Iron Warriors above, I mentioned to him that they likely knew who he was and disregarded his Iron Warriors out of spite. He pretty much agreed.

I recall our game being an all night fight scenario and as I was lacking in blacksun filters, the night fight rule negated the Tau's range advantage entirely! Much to his relief as he was already deeply concerned with my force prior to that announcement. It was a close and fun game that he ultimately won. The most memorable part however was the following exchange we had mid-game:

Rob: Every fucking tank has a smart missile system!

Rob: Oh and I guess I'm supposed to thank you for that right?

One of his friends lit up and exclaimed Ooh! Are those our smart missile systems? However with a withering glare from Rob he meekly went back to quietly watching.

In all honesty, that was my favorite part of the entire day!

Coming back to the present, Neverness and I have rescheduled our snow-delayed 40k game for this coming Saturday. So hopefully there will be a bat rep forthcoming of my Tau versus...something no doubt fiendish and dastardly.

My Tau army was so close to completion, but then...

...we put a house under contract. Huzzah! 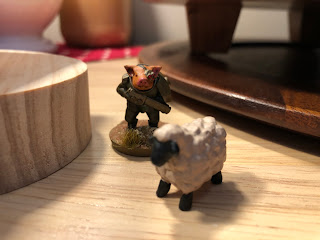 The sheep is no doubt wary of that armed swine standing guard...

I've lived in my little house for 20 years now and do you have any idea just how much stuff I have squirreled away in here??? So much for painting/hobby time. That said I will keep the Tau aside in hopes that maybe somewhere in the coming month(s?) I can maybe sneak in a game with Neverness. 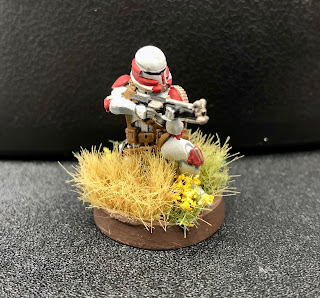 Clone Trooper type: Unknown, Unit type: Unknown, Location: Isn't it always somewhere in the Outer Rim?, Pre/Post Order 66: Unknown.
We had planned to play this past Saturday. However a predicted (though still freak) snow storm nixed that as he both gets to work outside/on the road and also lives up in the mountainous hinterlands of eastern Tennessee. That said it was a good day to go house hunting as the inclement weather easily answered questions like 'will this driveway be an issue in bad weather?' (answer: no., etc.). 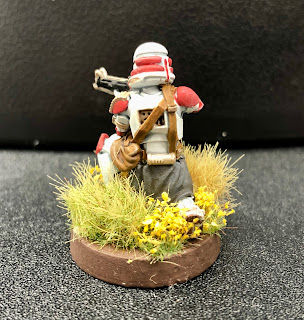 This mini was a freebee that I'd gotten way back when I was painting stuff for Star Wars Legion. He's been on my desk since then, and I gave hime a quick and ugly paint job while waiting to hear on whether our offer had been accepted, counter offer, waiting on documents to sign, etc. T'was a nervous evening for sure and this mini helped me wade thru the tension.

Prior to our sudden change in life plans, I did get the Pathfinders (sans drones) assembled and base coated at least. As such, in a few months' time when the dust settles, hopefully I can restart on them and bring this project to its (now) eventual conclusion.

FOR THE EMPRAH!
The clone is now stationed on my desk at work, waging an eternal war with my chocolate chip marine for control of my computer's secondary monitor (my primary monitor is under Tau jurisdiction).

Six more for the horde. 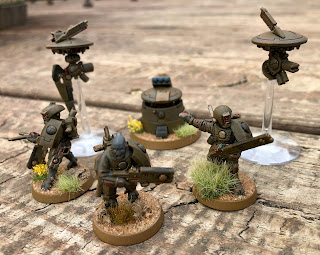 The army is shaping up nicely. With the exception of the Kroot carnivore squad, these six minis are the last of my to-be-painted 'Troops' models. That totals out to 44 painted models in...a month and a half or so! 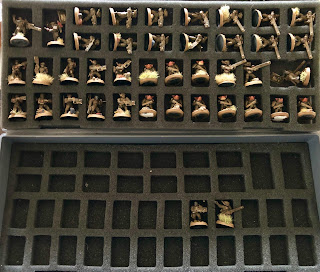 I have no idea when I've last had this many minis for ANY game system, painted all in the same color scheme... 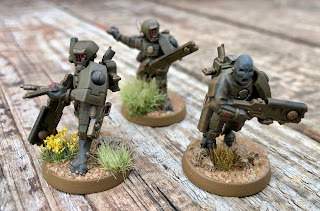 The last two breachers and a fire warrior tossing a grenade (that according to Battlescribe he no longer has). The latter will replace the original fire warrior that inspired this army, yet doesn't quite match him. Thus that O.G. has returned to guarding my desk at work.

So far this week, I've assembled most of the Pathfinder squad, and may start painting my XV8 equipped commander. Barring any future (though much needed) vehicular and battlesuit additions, the commander and pathfinders are all that I have left to paint in these colors and it's none too soon let me tell you! 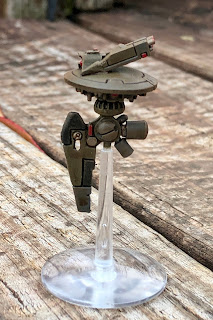 My non-standard 'wifi hot-spot' marker drone. I believe it once belonged to Commander Shadowsun. 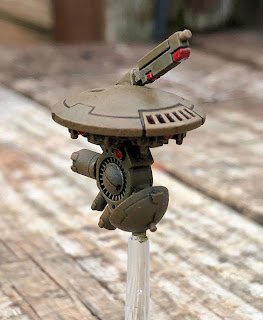 Nowadays, the Guardian drone essentially gives fire warriors the Tau equivalent of Trans-human physiology. Suck it space marines, you only get that as a strategem!

My army is a bit light on drones, but as you can see I do have a few (the pathfinder sprues come with three). I also have this one Support turret which takes an action to deploy. There are an awful lot of actions in 40k these days. Markerlights, support turrets, and I'm sure quite a bit more. 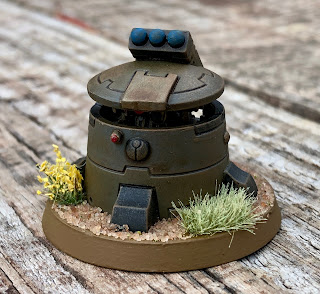 So do you suppose it's collapsible or something? Maybe its inflatable like a bouncy house...

As for the aforementionedmarkerlights and turret, the 'action' is essentially don't move. Did we seriously, need a game mechanic with specific rules that amounted to not moving?  Dumb. 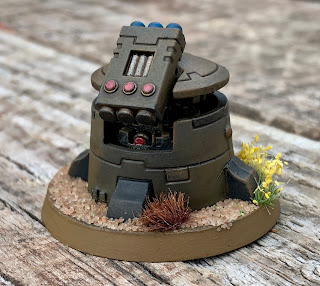 The rocket pod's back blast has not only scorched the backside of the turret, but its killed that little tuft as well.

Painting thru it all... 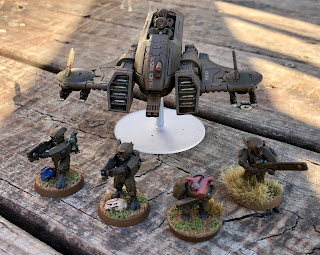 And thus the entirety of my Tau's vehicle compliment (currently anyways) is complete!

Still making progress, despite the fact that my grandfather passed away unexpectedly last week in the wee hours of Thursday morning. He was a truly amazing man, and I can't even hope to sum him up in a few words on this page.

Luckily I was able to take my grandmother to see him for a bit the evening before he passed and there was no indication that he was at his end. Meaning it was quick, if not instant. Like myself and My Beloved Wolfy, Ma and Granddaddy's last words (after 74 years) were 'I love you' along with a kiss goodnight.

That's the best way to go if there is such a thing. 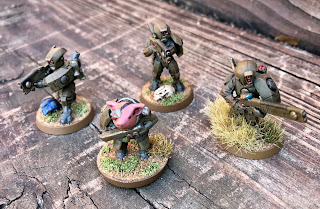 This little bunch finishes out my pulse rifle equipped strike team and the hogziliary squads.

As for my Tau, this week was mostly repaints. Those being the two former Fem Fa'Tau breachers, one last Hogziliary, as well as a fire warrior that I previously thought would need to be converted into a breacher (until I realized that I had miscounted and found myself  short one fire warrior for the pulse rifle squad). 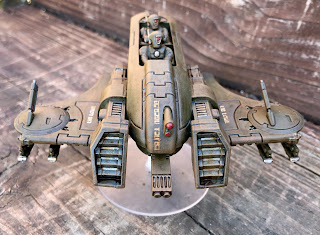 It almost looks all green, with the grey areas practically invisible under all that grime.

I also painted the piranha's two gun drones. Taking a bit of a break from the infantry, I then went on to completely repaint the also former Fem Fa'Tau vehicle. I'm sure that I never finished painting it originally as I was bouncing back and forth between it as well as a Hammerhead and Devilfish, not a recommended technique. 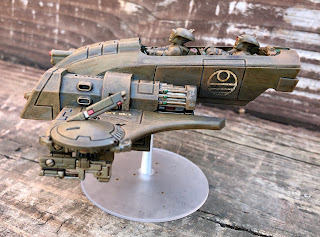 I always have a hellova time inking vehicles. The wash leaves dark splotches all over, and the model looks just plain awful afterwards. Thus the heavy dry brushing of grime which hides all sins.

All were in the same half painted state when I gave up on them, never to return (certainly wasn't the easiest of color schemes to paint either). Now it only has six colors in total. As such  progressed quite a bit on it in a very short time and managed to finish it up yesterday morning, prior to leaving for granddaddy's funeral. 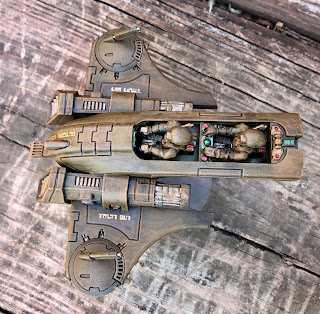 It camouflages quite nicely with my deck (which is in dire need of  being re-stained).

As before with the loss of my stepfather many years ago, more recently My Beloved Wolfy, Hoss, and now Granddaddy, painting minis is an excellent way to tune out the world for a little bit of a happy respite. That said, after the initial tears of this past week, yesterday's viewing and internment ceremony at the Mountain Home National Cemetery for Granddaddy (nobody can make it thru the playing of Taps with a dry eye), the day very much ended as a celebration of life! 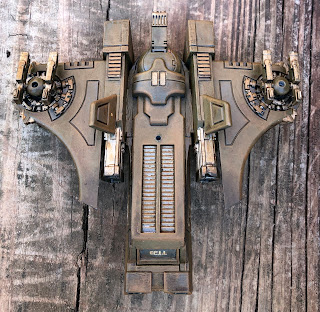