Gue'vesa (aka: Humans for the Greater Good) 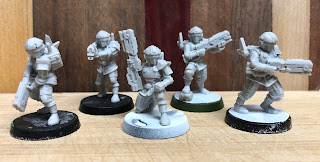 My Heresy Lab Kickstarter minis arrived this weekend, and I'm quite pleased with them. Hell, I wish I'd gotten more! This KS finished up in early December of last year, with an ETA of March/April of this one. Considering that (1) it's a Kickstarter and (2) Covid, it's a pleasant surprise that they were only delayed a few weeks. 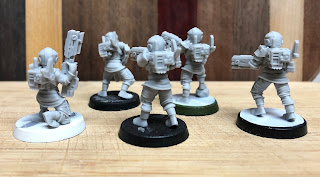 These came with 32mm bases, however my Tau infantry are all on 25mm bases. As such I had to scrounge up some 25mm bases, all of which had already been used previously.

The casts are crisp, clean and of superior quality and came with only one complaint: one mini had an unfortunately located gate on the helm. It's removal took with it the raised helmet stripe his/her companions have.

These will serve as my Fem Fa'Tau garrison army's pathfinder squad (I say garrison as it's almost bereft of heavy weaponry). Armed almost entirely with small arms and accompanied by a lone Piranha, they're basically a force that was left behind to hold recently captured ground whilst the frontline continued to advance. 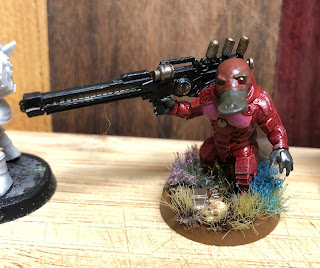 This Xenos species is as-yet unknown to the Imperium. Whilst this rarely seen species (known to the Tau as the Aww-Zees) is of little threat to the Imperium (despite that this one appears to be carrying some sort of rail rifle), the fact that yet another species has thrown it's lot in with the Greater Good should be cause for alarm...

In total (now that these have arrived), the army clocks in at a little over 500pts. It's probably a pushover, though I'll still field it as-is at some point.

Here of late, aside from painting Battletech minis (which is no longer in the purview of this blog) I haven't been doing much hobbying outside of just buying stuff. Several recent purchases were showcased in Neverness' recent battle report in the form of a few newly added Aeldari Eldar Corsairs with spar-glaives (a CCW that confers +1 attack), a Warlock conversion, and a beautifully painted (or perhaps wrapped?) Falcon.

Still, the space elves needed a bit more anti-tank weaponry as was sorely evidenced in that game and as such the above minis are traveling in my direction via the webway as we speak... 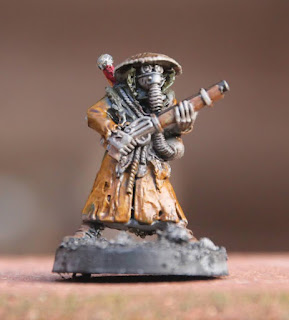 Zzzzzz's 'Xi' standing proud atop the 'Brick of Scrutiny'. This is the mini that lead me on a somewhat on again, off again (but ultimately successful) search.

I've recently found, and summarily ordered the old, wasteland scavenger mini (pictured above) that I first spotted on Devos IV. No idea what I'll do with it, but I do love the mini. Having a bit of an AdMech-esque (or possibly a Heretek?) appearance, I've dubbed him Dev0504 in recognition of Zzzzzz bringing this mini to my attention.

Lastly, I scrounged up enough 25mm non-slotta bases to invert and glue in my Tarrelian Hog Soldiers (and their non-removable integrated bases). I then added the Tau Breacher shoulder pads as of all of the fire warrior shoulder guard types, those fit best regardless of which side they're on. The originally painted hog, and one other (wearing 2 shoulder guards designating it the Shas'ui equivalent) had their base gaps filled in with my mortal enemy: green stuff. 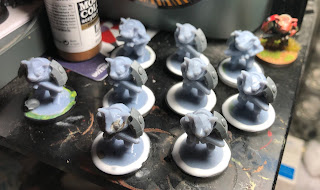 The Greater Good is not above using some hired swine as cannon fodder.

Recently though, Neverness mentioned the use of filing in gaps with Elmer's glue. That's a method I used long ago and pretty much had forgotten about at some point. Thus I duly chose to do that here, though having watched one to many an episode of the Great British Bakeoff, it felt as though I was piping royal icing onto the bases rather than it did glue, lol. 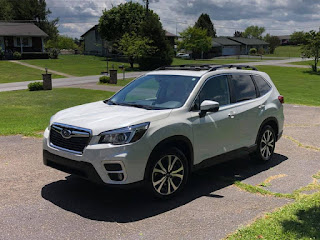 It was a toss up between this and a couple Forgeworld titans. I mean let's face it: the cost was roughly the same. I'm just hoping I made the right decision...

Amongst my recent purchases is my new (to me) 2020 Subaru Forester. As such, in light of this last purchase, my little spending spree is now officially at an end. 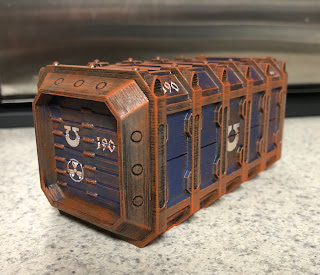 I've been busy painting on my Battletech terrain but that isn't relevant to this blog. Approaching burnout on that project, I opted for a bit of a 'speed paint' on a primed, 3D printed Munitorum container that's been taking up space on my desk for a bit. 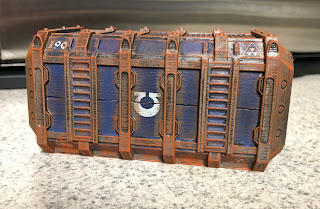 Ya have to wonder what the radioactive contents are? Power armor/plasma gun power supplies? Or maybe just the space marine's lunch...

I knocked this out in a little under two hours, and it took that long only because of the time needed to apply a whopping 16 decals! I wanted there to be consistent markings on all sides, top and bottom excluded as those will likely be hidden under other stacked containers whilst in transit. 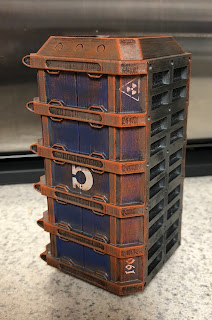 A better view of the lower side markings which mimic those up top.

Originally primed black, this barely surpasses the 3-color minimum with Macragge Blue, Leadbelcher and Ryza rust being the only colors used. I went rather heavy on the rust but am pleased with the end result. Clearly container 190 has been in use for centuries...

I have two more of these still unprimed, plus an actual GW 'open' container buried somewhere.

In other news, the stars aligned this past weekend and Neverness and I were able to play a game of 40k! He has a battle report in the works, so keep an eye out for that here shortly! 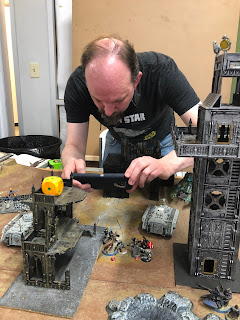 Here he is, carefully chronicling the proceedings in real time...