BIG Games Workshop reveal yesterday! HUGE!! (if I'm honest...), was is it you ask: Yet another Primaris Lieutenant of course!

Its this year's cancelled con-exclusive mini. Making it available to everybody (for once) rather than just con-attendees and idiots with more dollars than sense who are willing to sell a kidney to buy one off of ebay, is pretty cool in my opinion. To be honest, my usual primaris ranting aside...I even like the model.

This guy might even gallantly lead my Silver Drakes out of the case in which they're imprisoned! To my eyes he looks more like a captain than a mere Lt. given the iron halo gubbins. Thus I thought: what the hell let's order one...

I log onto GW's store, create a new acct. (can't put him in my cart without one) and I haven't ordered from them in so long that my old acct. has been deleted, and okay boom: I'm good to go! Back to the home page, I click to order (by 4/10/20). Orders over $65 get free shipping, however this won't be ready to ship till October, so anything you order with it ain't coming till then either. Skipping the free shipping I see that the cheapest shipping option is another $10, sigh.

Of course there's free shipping to your 'local store' for a convenient pick up. However my 'local' store is 122 miles away in Knoxville. When visiting Knoxville its always to visit family who live on the opposite side of town from my 'local' GW so nix that option.

Adding to the $$$, GW's North American headquarters is inconveniently located in Memphis Tennessee (or 503 miles distant), meaning I get add some good ol' in-state sales tax for good measure resulting in a grand total of:

Yeah, no thanks. Kinda sucks too as I was (for a few minutes anyways) looking forward to splurging for this model.
Posted by Da Masta Cheef at 1:10 PM 6 comments:

So, is everybody all castled up?


Good. Sorry to say that those fortified walls won't do any actual good, but at least they make you feel better.

My beloved Wolfy and I took the weekend off, spending it up in the mountains of North Carolina to celebrate our anniversary a little early (originally we were to see a now postponed show in Asheville). The ongoing zombie apocalypse made finding dinner a bit challenging, but we managed. With our actual anniversary a mere 10 days out, we figured movement restrictions would only be worse by then so kept our Airbnb reservation. We only came into contact with 1-person at a drive thru during the whole trip, so 'social distancing' was still achieved, lol.

It was an easy drive 1.5 hour drive, so after settling back in at home yesterday I gotta little bit of brush time in. I'd gotten the really rough/basic colors in on my new warboss  previously, and so added yet more color to bring him up to the next WIP stage going from 'fugly', now to 'still fugly'. He's slowly getting there though.

With rain forecasted for the next three days and the slow breakdown of civil society an on-going thing, odds are we'll stay hunkered down and I'll be able to work some more on Da Noo Masta Cheef!
Posted by Da Masta Cheef at 7:54 AM 9 comments:

Expanding further on my minis for unplayed armies theme, my Vickers Light Tank Mk VIb, 15 CWT truck and tilly arrived for my Bolt Action Quar 'army'. All scale nicely with each other as well as my universal carrier which is always a concern when mixing manufacturers, even within the same scale.


The tank is from Blitzkrieg Miniatures. This was my first purchase from them, and was both quick to arrive and flawlessly cast, I highly recommend them! It was a little pricey, but I'm okay with paying for quality products.

Going on the cheap however, I bought the truck and tilly from Rosa Miniatures and Games, an ebay seller with a large catalog of 3D printed vehicles, most of them for WWII. They worked with me as I only wanted one of each (they're normally sold in pairs, one canvas covered and the other with an open bed). Good communication, and good minis in my opinion. I'd buy from them again.

The cab of the tilly seems a bit small for the pear-shaped Quar physique. Initially I was thinking it was too small for any use but then recalled looking in real life cars of the 1930s and 40s and thinking to myself 'there's no way I'd ever fit in there...' (I'm 6'6" tall and none too slim for those who don't know). Besides, in the 1940s, ergonomic crew comfort wasn't even a consideration for wartime production.

So just the driver will ride in the cab I guess with my officers, or maybe the AT-rifle team riding in back (if anything at all...these two vehicles will likely serve as terrain more than they will as transports).

The Quar infantry are COMPLETE!!! 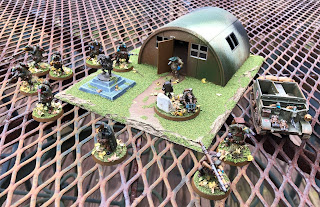 All of them! Yes, the entire collection...sounds quite impressive doesn't it? Or, at least it does until I admit that I only have what is pictured above...and well, technically there are more Quonsets to paint... 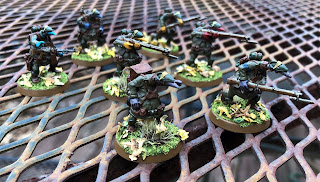 The last batch of seven took me a bit longer than I intended, and they did require a trip to the FLGS as I had run out of whatever long oop GW brown wash I had used on the original minis. I opted for Seraphim Sepia and honestly can't tell the new from the old so it was a pretty good match.


Like the other three, these Quar are crunching around in the fallen leaves of Autumn, be they on the 'ground' or hung up in the tufts of grass. Speaking of the tufts, I apparently got some glue for the flocking into the grass as well. Initially I was trying to remove the flock that stuck to it (largely resulting in the removal of the entire grass strands) but decided that (1) it just looked like a different type of weeds if left as-is and (2) it was much easier to leave 'em be.

With my meager collection of Quar infantry painted, all I have left is the equally sparse remainder of the Quar motor pool. They're is still out in space somewhere, consisting of a Vickers light tank coming from Blitzkrieg minis, as well as a pair of 3D printed vehicles: a 15 CWT truck and a Tilly. The latter two were purchased off of ebay and can double as terrain as easily as they can be used in an army.

I do wonder at the value of unarmed, soft skinned transports in games of Bolt Action, although the question is largely academic I suppose. Locally the game is dead (currently), not that I'm a big of a fan of it to begin with and well...this collection shaping up to be more of a hodgepodge of early war and Home Guard units that I like, rather than any sort of proper force that would be worth a damn on the table top.

For now though I'm not sure what to paint next...Battletech? Orks? 15mm infantry? Astral Claws? Black Templars? Dunno, will see when I next pic up a brush I guess.


Photos fixed...sure was nice of blogger to wreck almost all of them wasn't it?

Painting more minis for yet another game that I don't play...


I say another game I don't play as I've been perusing the collective opinions of the blogosphere on the new 40k faq/errata updates more commonly known as the Iron Hands nerf. I haven't made it to an FLGS game night in about a year or so and I'm not at all involved with playing 40k at the moment...indeed my last game was back in June (wow, WTF?), and I haven't read any of the new current codexes.

Thusly, I found myself oblivious to the new space marine codex 'doctrines' and equally perplexed by all of the wailing, crying, sudden ebaying of Iron Hands dreadnoughts, and gnashing of teeth mixed in with the simultaneous (and wide spread) thunderous applause from across teh interwebz. Honestly, my overall impression of all of this hoopla is this:
Do I even play this game?

Seems like I've only been paying attention to what folks are painting in my usual perusal of blogs, rather than what they're playing. Sure I check on rumors and all, but even then mainly to see what is coming out that I can't afford and (again) not bothering to read the associated rule previews for.

Oh well whatever...so what the hell is it that I'm painting this time? My beloved Quar (and no Monkeychuka, they are still not Skeksis) lol.

These are nominally my (weird War II but not Konflikt 47) Bolt Action British army. I use that term loosely as they total up to a mere 200+ points at the moment, and am still a squad short of a legal list (indeed, this is the only infantry squad I have). However army legality isn't really an issue as (1) they're anthropomorphized anteaters instead of humans, (2) Bolt action isn't really my cup of tea, and (3) most importantly, I don't know of anyone who is currently even playing it here locally.

As for the Quar themselves, I bought this bunch back in September and they've been sitting on my desk, glowering at me all the while in their dusty, bare metal state ever since. That made me sad, so I decided to give 'em some love following the completion of my Astral Claws tactical squad.

Only having seven in total to paint I opted to do them all at once in a generally loathsome batch painting process. Luckily, painting 'em this way is going fairly quickly thus far and I'm not hating it. Maybe I'm finally coming 'round to the process...maybe. Once done, my little force will be fully painted barring their forthcoming tank. As such, with that as my (so-called) armor support these are very much in the early war, British Quar Expeditionary Force category.

Speaking of tanks, I regunned the universal carrier with it's original LMG. I removed the HUGE one as the LMGs that came with the model itself matches the squad carried LMG in both size and design (for the most part). I guess the need for a ridiculously over-sized 'big gun' back when I built it was due to my gamer upbringing in 40k.

Hopefully I'll have these finished up before the ol' hobby butterfly strikes again!
Posted by Da Masta Cheef at 5:00 AM 2 comments: