Everybody needs to shoot Amy!

Curiously, my Beloved Wolfy (a.k.a.: Amy) took offense to that....lol.


We were playing a 4-player X-Wing free-for-all, with Wolfy, Billy and myself all fielding Rebels, and Rob was using Scum. By that point in the game everyone had lost at least one ship, except for her and she was using both her new Ghost and attack shuttle (gifted to her as a wedding present by Kushial), along with her favorite A-Wing pilot Gemmer Sojan who was again equipped with his infernal stealth device!

Whilst Gemmer bit the dust, Kushial will be pleased to find that not only did Wolfy's two new ships survive the game, they were the only ships to do so, giving her a definitive win!
Posted by Da Masta Cheef at 7:00 AM 2 comments:

The 'Blue Waffle' is complete!


The Blue Waffle is what Billy named his YT after seeing the WIP photos. Inspiration kinda up and left me mid-way thru this project which is why it took me so long to complete. Not knowing what else to do after my last post, I opted for some good ol' indecipherable alien script to decorate the hull, a bit of dry-brushed on grime, and called it 'done'. 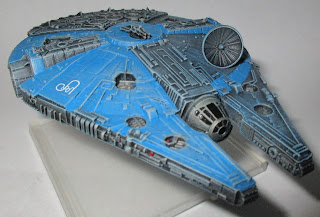 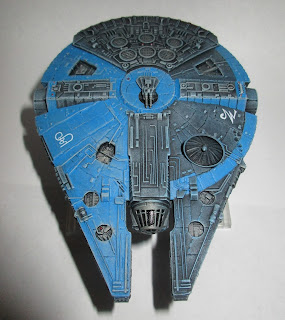 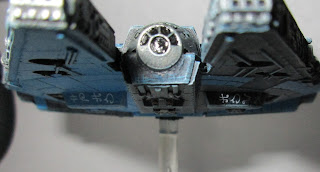 lol, I found these comical little bits this past Sunday on FB from Zombiesmith, the Quar's creator.


It seems the Quar have a PC game which just came out.
(I have a Mac, sad face)


Sorry, that's all I have for today. It was a beautiful weekend here in good Ol' Tennessee so unsurprisingly, gaming was not on our 'to do' list.
Posted by Da Masta Cheef at 10:19 PM 1 comment:

I dunno...just seems that after waiting for years to actually have some regular opponents to play the game, now that I have them I find the game itself to be kinda 'meh' overall. Sure individual games are fun, my most recent game being the one during my bachelor party is a good example, but overall I seem to have little enthusiasm for playing it again. In all honesty, the best part of playing Bolt Action (for me that is) is that it lets me use my Quar minis.

For the game itself, that's hardly a good selling point.

I've pondered other forces, like my Eleventy First for example. However the basic trooper minis have been out-of-stock for well over a year now, meaning they're in all likelihood out-of-production. killing that army before it ever had a chance. About the only option left to make 'em a fieldable force is to use the Tank War supplement.

However, before Screech starts giggling with delight, only a recon force built around armored cars, or at the heaviest Stuart light tanks really appeals to me. Playing around with various builds consisting of 3 of the above with an attached (hobbit) infantry squad mounted in a Bren carrier only clocks in around 500-700 point range. It also packs a hefty price tag and I'm loathe to spend much on a game which I'm already kinda bored with...hell, I've even pondered ebaying all of my Bolt Action minis (well, except for the partisans) in hopes of financing a small force of Kromlech's Iron Reich goblins to field as the Germans. However as both Hasslefree's Kindred (the Eleventy-First's Hobbits) and Zombiesmith's Quar are fairly obscure to begin with, I'm not sure if there's even any sort of resale market for them.

So yeah. As far as Bolt Action is concerned, I'm just not sure on what to do going forward...
Posted by Da Masta Cheef at 7:00 AM 3 comments:

I'm not going to shoot at that stupid A-wing...

Yes, that was a direct quote (heard more than once this past Saturday night) as spoken by Billy during our game of X-Wing. Running 150 points, Wolfy and I fielding the Rebels teamed up against Billy's S&V and very quickly we all learned that Gemmer Sojan with a stealth device is just an evil combination.

Averaging FIVE defense dice over the course of the game (and on occasion SIX!), Gemmer (flown by Wolfy) hung onto that stealth device till the next to last turn of the game when Billy finally managed to get close enough to hit with an auto-blaster turret! Normally, when I use em, the stealth device is ruined on the 1st volley.


Another thing we learned during the game (or at least I did) was that Dash Rendar is the only pilot who's worth a damn when using the YT-2400, with of course both the Outrider title and a mangler cannon (such a dumb name). That's probably old news to the rest of the world, but I hadn't actually used him but rather all of the other YT-2400 pilots with an abysmal track record.


lol, that said, Dash and his YT was our side's only ship loss. Gemmer was down a shield and both Y-Wings were bleeding. Ronark and his HWK were untouched as he did his job by hanging back (for the most part) and bestowing PS12 on various ships whilst taking pot-shots when possible.

Billy on the other hand was wiped out. Not bad for our first game as a married couple!

Its all about the symmetry...


...or rather adding back in a lack thereof.

I converted my friend Billy's YT-1300 some months ago, but never finished the project. A few weeks back he inquired about my (lack of) progress on it, but as the wedding was imminent he knew he was S.O.L. on that till after the wedding (which is now).

My biggest stumbling block on this (and thus my excuse for delay) was how to paint it. Dry brushing to bring out some highlights is all well and good, but ya still need a decent paint job underneath it. So, whilst drybrushing yet some more (in some sort of brain-dead futility I guess) it occurred to me that having made the YT symmetrical in shape, there isn't any actual need to paint it symmetrically...right?

So I put up the dry brush and went about painting it normally, and will return to the washes and drybrushing at a later time. Here it is thus far:


One question though: Do you guys like the dark gray/black with the blue, or the lighter gray? Don't worry, the drybrushing will be added later on...

Just in case there were any doubters...

No, my last post wasn't an April Fool's day joke.


As can be expected, there's no gaming updates from this past weekend from us. So check back Thursday and maybe I'll have something gaming related...maybe.
Posted by Da Masta Cheef at 7:00 AM 2 comments: