Well, I've now sold off all of the Dark Angels from the Dark Vengeance box with the exception of two models. The limited edition chaplain I gave to RTVoril, as his kids were wanting to learn how to play 40k with Dad (aww...) and he started them off with the easily available Dark Angels, and the Company Master which I've kept for myself. When i saw the forthcoming DV DA minis, I punted my existing DA tac. squad and Chaplain Bane from the 3rd Battle Company to the 6th Reserve Company.

Then I sold the new DV minis as they really made the old ones look bad, so I guess the point was moot. I didn't want to redo the company markings again, however I want a dev. squad for my DA allied contingent. So, I'll just paint them up as being from the 9th reserve company. And to lead them (when not using Bane) will be my newly painted 9th Company Master: 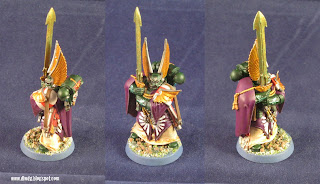 The whole purpose of this guy is for the excuse to use the 'Lion's Roar' which is a combi bolter-plasma cannon! Who better is there to wield that particular toy than the master of the devastator company? I'm not sure if there will be a command squad with the Banner of Devastation to go with him or not, as I may not end up with enough Dark Angels with bolters for it to be worth it. However I think an eventual command squad outfitted like my Chaos Havoc 'Plasma Death' squad is a possibility...

Initially I was going to add a decal of a '9' to his shoulder, but cutting a decal apart to fit around the stuff already on the shoulder, as well as being a curved surface was a bit off putting, so instead I took the easy way out and just painted the company marking on the shoulder instead. Also, despite carefully cutting the mini from the sprue, the two points of contact with the helmet wings ended up leaving little holes. I left them as is though figuring that if you're wearing as grandiose of a helmet as that, its bound to gain a few bullet holes during combat.

I'm going to get the DA codex this weekend, and will actually be fielding my DA as DA instead of dark green vanilla marines. However my devastators with their flakk missiles are not yet assembled, so the Company Master will not partake in combat. Instead, while he musters his troops, Chaplain Bane & his squad from the 6th will join the Storm Wardens with a whole lot of 'not that much' as my DA allied contingent currently weighs in at a mere 215 points. Such a small force asks the question of: why even bother?

Look at the bread crumbs at is feet. He is totally hunting down Hansel and Gretel from unauthorized witch killing.

I dig it - very cool color combos, and I especially like the purple you used for the cloak! The gold sword is a neat way to go for the commander too - I may have to steal, er, borrow that idea! :)

Keep up the great work, man!

Thanks Mordian! For all of my power weapons I use a combination of shining gold and an old GW metallic green dry brushed over boltgun metal. After which I give it a coating of ard' coat.

The purple cloak was borrowed from other paint jobs on this mini that I've seen online, so steal away!