Holy crap I won a contest! Now why won't the lottery let me win....doesn't have to be the jackpot, just one of the middling prize amounts, or what about an international trip? That'd be great...

Okay, back to the present, Admiral Drax, one of the original inspirations for my decision to start up my own blog, reached his 500th post earlier this week and offered up a contest. He would paint a unit from a randomly chosen commenter of that post, and long story short, I won that prize (and a mob of my Orks will get to go on an international trip at least)!

Amongst the congratulatory comments were many suggesting I send Drax a 30-50 model horde to paint, however that seems to be taking advantage of an already good situation. Instead I offered Drax his choice: My still-in-the-box Ork Fightabomma or my Tankbustas. Concerned about what international shipping would do to a Fighta, he opted for the Tankbusta mob. 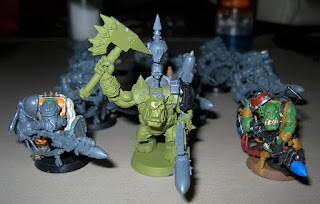 When asking what I would be sending to Drax, my amazing and wonderful fiance Wolfy said: Nine? That's it? You can't even send him an even dozen?

lol, yes just nine. I already have one painted, and being the only all metal mini in the mob, aesthetically it already doesn't match the rest of the bunch, so the differing paint job won't matter. Besides, somebody has to get the thankless task of always dying first.

Drax has painted an awful lot of green in his gaming history, but he's yet to paint an Ork. So dis iz a good'n propa fix to dat! Beyond the green skin, he can do whatever he wants paint-wise. Orks aren't conformists (which is convenient). 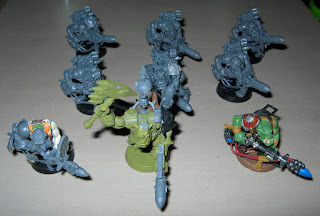 As you can see, one is already partially painted which he can either simply finish or start over as he pleases. Another also has a bit of my original and horrid tiger-striped color scheme showing. Don't hesitate Drax! Prime over it and don't look back, lol! Nobody wants to see orks painted like that...

So again, I send many thanks to Admiral Drax, and I look forward to seeing what he does with my boyz!
Posted by Da Masta Cheef at 6:58 AM

oooh! Tankbustas! Can't wait to see how he paints these guys up! Congrats on winning!

Well, you did say they were the only unit worth a damn in the current Codex so it makes sense to get them painted up. Congrats again!

Stand by for mediocrity!

lol, I only aim for table top quality myself, and THAT is all shades of mediocrity!