Currently, I hate it. 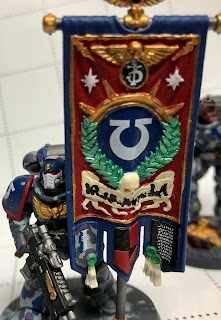 I'm pretty sure that that banner scribbling says something akin to: this guy sucks at painting.

Okay so...were it not for the fucking flag, these three would have already been done (days ago). That is despite an unwanted visit by papa Nurgle over the holiday weekend that ground all forward painting progress (and pretty much everything else in my world) to an abysmal halt for a few days.

The problem is...is that when painting out words, I tend to really suck at it. No problem right? Just use a pen-problem solved. Except, whatever pen I used previously for this sort of thing had long since disappeared. I did find a blue one though and hey-Smurfs are blue so why not? and that's where it all went wrong... 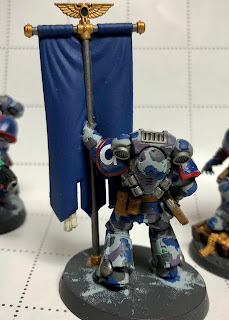 Kinda wishing it was a blank slate on the front side as well...

First attempt, I got the spacing wrong, as expected but hey, no worries, once dry I'll just paint over it and...the whole fucking scroll smeared blue, WTF?!? Wait until dry again, repaint and still a blue smear, okay seriously what the hell? 4-5 layers of Bleached bone later, new/different brushes that have never touched anything blue-still no good. What the actual fuck?!?

So I clear coated it, waited a few days due to real life shit and then, still smearing blue. DESPITE the fucking varnish!!! Base coat brown over-bleeds thru again (btw, despite being a perfectly serviceable pen, I threw that fucker in the trash purely out of spite). Also, the skull above said scroll had lost all detail by this point the paint was on so thick. Fuck. 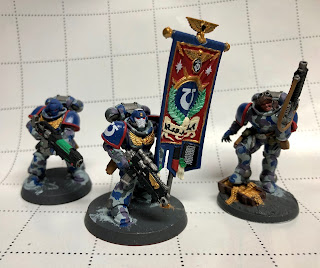 His two sidekicks still need decals of their own.

Alrighty so, this brings me to option A: Simple green it and start over. Or option B: scrape the paint off down to the bare plastic and start that scroll anew. I opted for option B though that probably is the least logical idea as it's prone to damaging the standard irreparably.

It worked well enough though and I repainted most of the banner, and just opted for the black scribble in lieu of actual writing. But...I hate the way that that looks, so likely will try repainting it bleached bone again and...I dunno at that point. 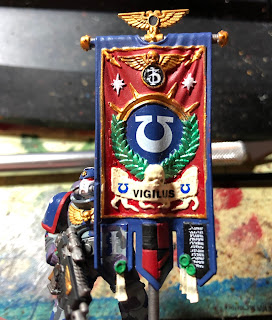 Decals...I went with decals. Looks good enough I guess. I wonder though, what planet these guys are fighting on?

Decals for the win.
Also, Microns; Get some.

That's what I used to have, but it's so rare that I use them that it's kind of a waste to buy one. The blue pen 'looked' to be similar but apparently was not.

I've got a pen you write on minis with.

I used to have em too. I think Kristy has some in VAST collection of stationary supplies, but alas I was impatient...