We all know how much interwebz nerd rage has been typed over the (im)possibility of female Space Marines, but as always the Horus Heresy novels feed new little tidbits into the original backstory (and yes I'm sure someone somewhere is already saying that the novels aren't canon fluff as they read this). 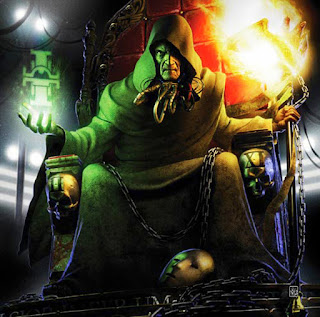 But, having just finished reading Scars, a Legion divided (which was rather enjoyable I must say), I thought I'd share this one, stand-out Quote by Malcador the Sigilite. Spoken amidst a conversation with Valdor of the Adeptus Custodes and Rogal Dorn of the Imperial Fists and in reference to a prior conversation with the Emperor himself:

"...You brothers-such a nest of rivalries. I warned him to make you sisters, that it would make things more civilized. He thought I was joking, I wasn't."

I honestly couldn't help but chuckle at the notion! Just imagine how different the game would be...

All is quiet on the hobby front, aside from receiving a cool new desk chair and an ARC-170 for X-Wing gifted to me by my Beloved Wolfy, as well a dozen detail brushes of various sizes given to me by my in-laws for Christmas. Whilst I'm enjoying those gifts and many more, I'm still trying to recover from Father Nurgle's unwanted 'Christmas gift' of a damned cold.