Two Eldar Corsairs and a Viet Cajun walk into a bar...

You aren't really expecting a punchline are you? 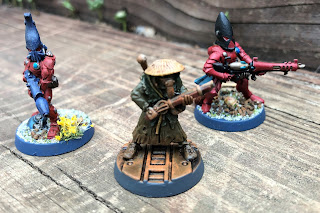 This week, not having any particular project in mind I just picked minis from within the horde scattered around my hobby area and painted whatever struck my fancy. First up, the Viet Cajun: 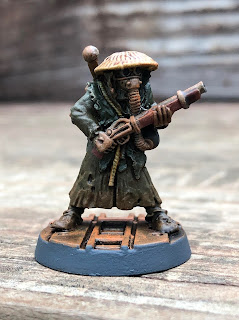 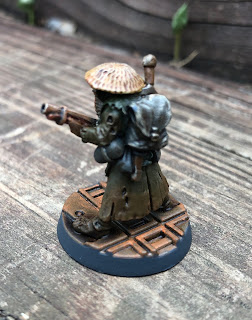 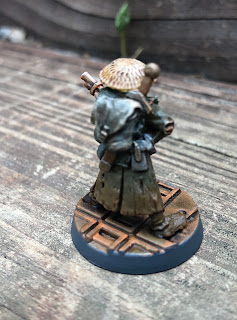 Viet Cajun is actually a food genre I recently discovered whilst watching the Netflix series Ugly Delicious. As soon as I head those two words mentioned in conjunction, this mini came to mind!

Originally I had intended to use this mini as an adeptus mechanicus...something, but he/she's way too ragged to fit in with that little contingent. Thus Stargrave will become his/her home I think.

I recently ordered up the rules PDF and have a multitude of 'off brand' minis (as that GW elitist Neverness would say) to populate my crews. I'm thinking this VC will serve as a locally hired guide or the like.

Speaking of GW, I also painted an Eldar Corsair armed with a shard carbine, as well as a Corsair Fire Dragon (the first ever Fire Dragon that I've painted I might add). I have another 5 of each yet to paint, plus a unit of my spar-glaive equipped Corsairs.  These both went relatively quickly and am sure I can knock the rest out fairly quickly (though whether or not I actually will remains to be seen). 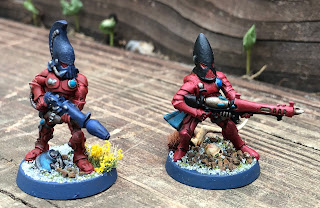 Similar yet different. Consistency isn't really a thing amongst my Corsair units. 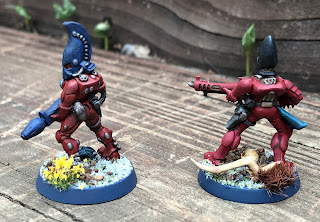 The yellow flowers are new, though most will end up adorning Fem'Fau Tau bases 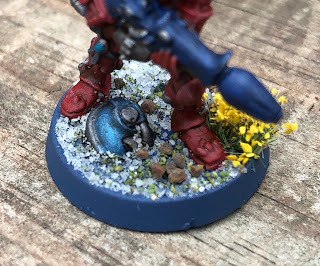 Whilst the Silver Drakes as a whole are fighting the Nids, small contingents are sent to fight in other warzones to keep the chapter from becoming too specialized. One can only hope that this one merely lost his helmet...

I approve of the Viet Cajun, off-brandness and all. Looks like he would make a great Underhive dreg...