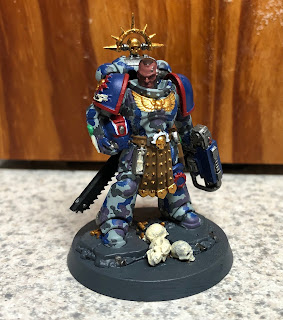 Hey Siph? Do I have the correct hair color for Lt. Horridus?

Just a quick update to let you all know that I'm celebrating Orktober by painting Ultramarines. Because...heresy and all that...or something. Lt. Horridus is now ready for decals I think.

He is so named as Siph kindly ordered and shipped Neverness and myself each an event only Primaris Lt. last year for the UK price. That cost, with shipping was still $20 CHEAPER than if we were to order them ourselves from GW USA directly (yes we gratefully reimbursed Siph for his troubles). 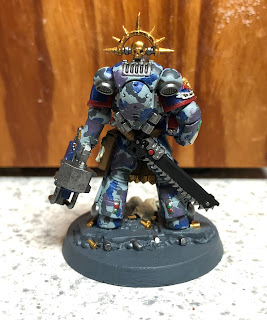 He is armed with a master-crafted auto-bolt rifle and an Astartes chainsword. Yes I know the latter is non-standard, however I've paid a Lt's power sword's price for it. Thus I doubt any opponent will mind.

Originally, I envisioned Lt. Horridus leading my Silver Drakes. However their small army already has a Lieutenant at the helm so when I started my camo Smurfs some ways back, this guy was duly transferred to lead the force. 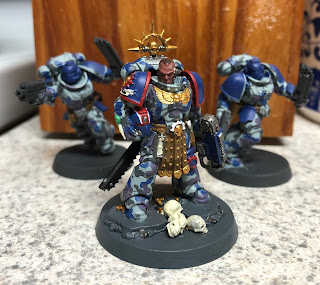 All three in this WIP batch. The two in back will tip their squad's scale towards the mostly painted side.

My small Primaris horde is slowly being divvied up between the Drakes' blue and silver and the Smurf's urban camo. Both clock in at about 500-750 points, though that will eventually change when minis a from all individual units start getting painted. Currently my Hellblasters and a 2nd assault intercessor squad are bereft of paint, whilst the bofors turret is both still on the sprue and in it's box.

No, not quite. Will be flocked around the edges, plus it wasn't yet inked in this pic.