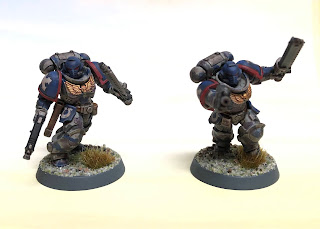 Sure they're a week late and (as is always the case with 40k) quite a few dollars short, but at least I did manage to finish these two up before going off in some other direction. Like my prior post featuring Lt. Horridus, this is just a photo dump of these two marines. My apologies for the indoor photos, but I ran out of daylight and rain is forecast for the next few days leaving me no other option. 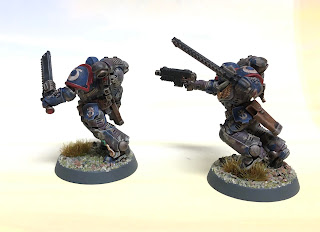 In addition to their red pauldron edging, the 3rd company's number is displayed on their left hip armor plates. 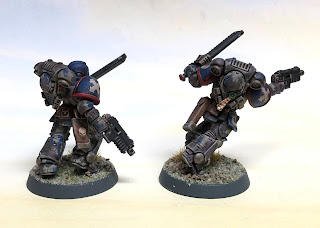 The skull on the left hand marine's holster is likely in recognition of a particularly impressive kill-shot. 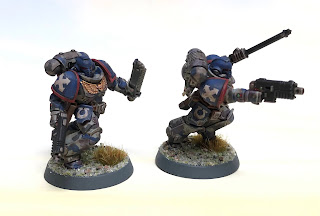 In addition to the left side pauldron, chapter icons are also displayed on the right hip armor plates (just incase you were indeed confused by the camo and didn't know who these guys were...). 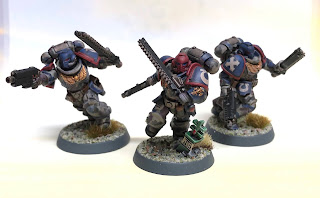 Here they are cutting a striking pose with their squad sergeant.
Posted by Da Masta Cheef at 5:00 AM

Very dynamic. They'll look great when they run away from my orks.

Aww hell no! These guys have banzai suicide charge written all over them!

Also these guys aren't to discounted so easily. In the one game I used them, they almost took down a Carnifex on the charge (and they would have gotten away with it too if it weren't for those meddling catalyst & regeneration psychic powers...).