A big rat and a slice o' cheese.

Well, despite my thoughts of my henchmen horde as being a 'failing' list, in their battlefield debut they almost tabled a mech/vet. IG army. Indeed the only remaining model IG model was a demolisher (in which all of my units in its range were redeploying away from, as they couldn't hurt it). Coteaz should be considered the MVP I guess having taken down a chimera & Pask's Vanquisher single handedly. However I think the MVP award goes to the death cult assassin who stood his ground after his squad was annihilated. Flush with victory, the IG vets. then charged him and 2 rounds of HTH later, he cut down the fleeing IG survivors. Not bad for a 15 point scrub!

Matt Fucking Ward & the Eversor assassin on the other hand were both gunned down via massed shotgun fire after doing nothing more than looking scary. I dunno, the army has potential I guess, though as my opponent noted, my anti-tank options are rather limited.

Below is my finished Justicar for my Exorcist's Purgation squad. He was both finished in time for the game and the sole survivor of his squad. They did account for a Basilisk & a vet squad, so I guess they gave a decent accounting for themselves.

With the 'cheese' out of the way, I now move onto the big rat. lol, no more explanation is needed on that topic I suppose. 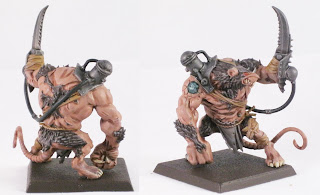 This isn't quite done as I've yet to decide on what to add to his base. 40mm bases are too large to simply flock without some sort of decoration. Otherwise they look more like wasted space than a proper base. I'll have to dig thru the bitz box to see if I have anything 'Empire-ish' looking to add. Aside from that, it was fairly quick & easy to paint with the Ogryn flesh wash once again doing most of the work for me. It certainly is a nice model though. Oh, and I've named him 'Scrum' which strikes me as an appropriate moniker for a rat Ogre.

My Skaven will be taking to the field tonight actually, though this big beastie won't be amongst them. They only have 70 gc or so in their stash, so he's a bit out of their price for the moment.
Posted by Da Masta Cheef at 9:35 AM

Jeesh, can you be more humble?! They kicked ass and you didn't need to use the typical GK crutches that all the other GK players are leaning on. They look great too!
We need to see how they stand up to an Ork Waaagh I think...(and to keep it fluffy, they'll be lead by a Bloodthirister). :D

Dunno how they'll fair vs. the green tide though they're (supposedly) purpose built to kill a bloodthirster...

That rat ogre looks excellent. It's time for a new WHFB army!

lol, thanks but shush you! Mordheim is supposed to scratch that itch w/o me starting any armies.

We could of used you last weekend though, there was a couple of WHFB players @ HT looking for some new opponents.