A drop pod for my Dreadnought

This weekend Murl gave me a 3rd (or possibly 4th) hand drop pod that he got for next to nothing himself. It was almost fully assembled & unpainted which probably is why its been so under utilized and instead just passed around. The drop pod kit is (like so many) a kit that needs to be painted as its assembled. When he got a hold of it, the doors were all glued shut, though he popped them open. The interior contained the stormbolter & central console but none of the passenger restraints. 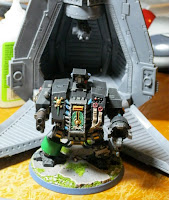 Rather than infantry, I intend to use this for my Aurora Chaplain Dreadnought. So I popped out the console bit, and in doing so, one of the side spars popped off as well. The opening of which was easily the size required for a dread to exit. However the now missing spar didn't align with the glued in place stormbolter, so I removed a second spar with some difficulty, to remedy that.

The spar that came off first will be replaced after painting as without it, access to the interior will be easier. Being that this model has already been around the block a time or two before paint was ever even a consideration, Its paint job will be decent, though nothing on par with Neverness' drop pods.

Anyways, the removal of the center console made a mess of the floor, and the removal of the nub over which is sat was even uglier as you can see. So I cut a circle out of a failcost blister pack (a BFG flight stand was just the right size), and sanded it a bit to scuff it up so paint will stick to it. Note the blood on the blister pack: remember kids, exacto blades are sharp! It still isn't pretty, however once primed black & dry brushed over with boltgun metal, it ought to be more than adequate.

All of the spars are needed whilst in flight, however once on the ground & the doors open, one spar needs to release as well (via explosive bolts I would imagine) to allow egress of the dread from the drop pod. So I cut down a strip of metal & glued it into the recess in which the top of the spar fits. I then drilled into the spar and added a magnet. This bulged out the spar a touch and the groove into which it goes had to be widened accordingly. Once the magnet was set I used Warfrog's Baking soda & superglue method to fill in the gaps, and scraped the residual glue from the face of the magnet. As you can see in the left photo, I can hold the whole pod by just the magentized spar, so it'll hold just fine once it all painted up.

On a differnet note, gaming front, last week as a good week. Wednesday night the Aurora 10th met Murl's Deathguard head on and fought them to a draw. I fielded 2 scout crewed (BS:3) predators, which both survived untouched (though required multiple fixes by my techmarine) and gave a good accounting for themselves. Later on Saturday, my Exodites took to the field of battle @ the FLGS. After much reluctance, Screech was convinced of building a 'mere' 1300 point list. In doing so Arhiman & the Thousand Sons took to the field and were promptly swept aside with just 11 Exodite casualties suffered! So much for my 'this army was built just to look good, rather than be effective' theory...
Posted by Da Masta Cheef at 8:50 AM

Thanks for the shout out!
It doesn't matter what condition this kit is in: it's ALWAYS a project!

I think I would like to tangle with those Exodites at some point...

Hey no problem (you'll be getting another one shortly actually...).

As for the Exodites, I have another box o' Guardians to assemble but for an army who's primary purpose was to look cool, they've given better than they've gotten over the course of their short career.