Well I finally got a hold of my Empire free company (or as i call it, the Mordheim Warband in a box) and a few characters. I've shelved my original idea for using a Marienburg list as the militia guys don't look nearly as foppish as I would think they should to fit that theme (I had considered a Sollund theme as well, but they use the same colors as many Marienburg scheme's that I've seen so I just shelved it). True no matter where you go in the Empire there seem to be miserable looking peasants Marienburg included, I thought I'd just go with my usual favorite of Stirland using the Reikland list. With my premise being that they're army deserters, or perhaps a border garrison gone rogue.

In the heraldry of the empire book it shows Stirland's armies in their often mismatched & dirty uniforms, and often using their own personal weapons. Quite often these are axes as they're more versatile than swords. So first i have three warriors (in lieu of Swordsmen) with axes light armor & shields (need to get those, as the militia box doesn't come with any).

Next up, I needed some archers! Stirland is renowned for its archers apparently (taken again from the heraldry book), so that fits well with the BS:4 for the archers in the Reikland list. You get LOTS of archer bits in the free company box, however no arrow/bolt quivers what-so-ever. I know they aren't technically archers in an empire army, but it struck me as just odd. I was going to call them the 'one-shot-wonders' but technically I already have one of those, just by a different name.

I'm of course referring to this guy.

He was intended to be a hero rather than a lone Henchman, however I didn't have the Mordheim book with me at the time, so I didn't realize till later that heroes can't get blunderbusses (which is a one shot weapon). Also, I guess its the wild blond hair or something, but for whatever reason he brought Nick Nolte to my mind. Now it only takes a quick google search to find one of his infamous mug shots, and they're...well, ugly. He's neither a skilled swordman (he's armed with a club as well), nor an expert marksman given his choice of firearm and the effects of a blunderbuss are likewise ugly, so.....Nick Nolte it is!

So who's in charge here anyways? 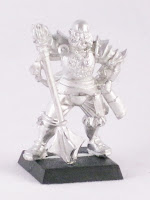 This is easily my favorite Empire character mini. Nothing exemplifies a knight on the downward spiral, as one who cannot go without a bottle of booze! Of course he needed a good German sounding name, and something that would also fit into the mold of the evil mastermind who frequently sends his minions off to their inevitable doom. So I gave him the name of a favorite old movie character: Hans Gruber. Unfortunately for Hans, he has a great weapon which means he strikes last & has only his heavy armor to protect him. Considering how Screech's identically equipped champion fared against the Skaven for his first few games, I'd say ol' Hans will be hitting the ground as often as he will that bottle!

I had hoped to use a bunch of Halberd wielding henchmen as well, but that was a misguided concept. I guess I was spoiled by dirt cheap (not-so) giant rats & barely equipped vermin kin in my Skaven warband. One warrior with light armor, helmet & halberd is 65gc! So, I decided to just use the middle guy as a sergeant (champion) instead. Needing a name for him (and coming up blank) I went with Karl, who was Gruber's 2nd, in Die Hard.

So, there are my Stirlanders for Mordheim, I'll post them on here as I paint them in the future.
Posted by Da Masta Cheef at 9:45 AM

Brill!
But, It has me lamenting my unfinished Empire Army...

Thanks! Though the problem is that I could amass, assemble, paint (most of), get bored with & sell off a WHFB army in the time that you & your perfectionist painting style will take to coming close to finishing that Empire army...