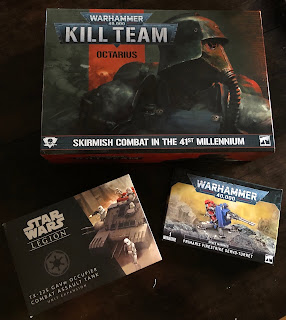 Well, not really. However my buying new toys budget is frozen for a bit as at this point I have so many new minis to build and paint that I don't even know where to start! I perused the new KT rules and was so thrilled with the updates that those plus the tokens and dumb movement tools are on eBay with one bid and almost a dozen watchers! It'll be good riddance to them.

Rules aside, there's still a metric ton of plastic in the box and having seen the built minis and terrain at the FLGS where I bought these, I'll definitely be hanging onto those!! I'll probably build those minis first now that I think of 'em...

After spending a bloody fortune, I came back a bit later for a game of X-wing with Frankie. Here's a few highlight pics rather than a bat rep, as being a week after playing, I don't recall all of the details specifically. That said it was my first win against him. A good thing too as he was starting to feel bad for me...lol. 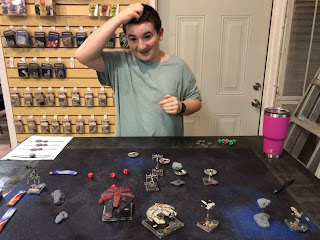 My wily opponent looking pleased as Chewbacca and the Wookie commandos aboard his YT-1300 The Red Kraken waylay into my Scoutmaster 3000 in turn two. 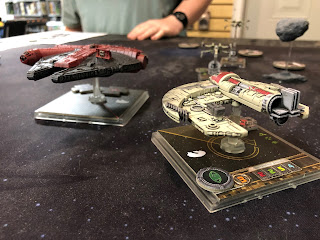 A truly uneven contest though I did take a good chunk of the Kraken's shields out in one volley much to Frankie's surprise. 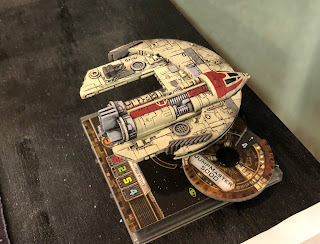 Turn 3, it died. Not sure but think this is only my second use of this ship and I don't think I liked it the first go 'round either... 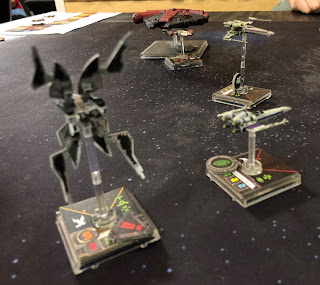 My Y-wing, down to it's last hit point instructs Frankie on the fine art of blocking and thus avoiding getting shot for 2 turns or so, much to his annoyance. 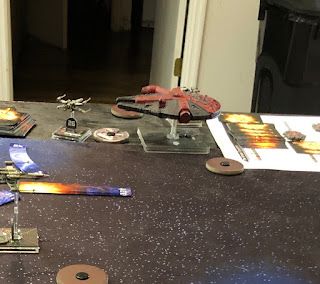 That said it did blow up, but only did so shortly before the Kraken itself also went BOOM! Up until this game he starting to believe it was invincible I think as I'd previously only inflicted minimal damage to it. 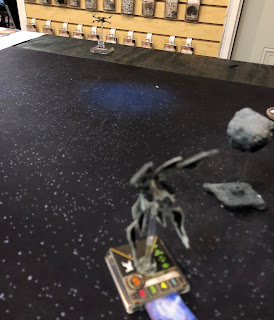 Down to his last, shieldless X-wing and just a little shocked at how good my StarViper was (it was still undamaged), Frankie's last X-Wing bolted off of the table, escaping to fight another day!