Purists like Neverness, no doubt already feel their gorge rising at this heretical notion...

So...given that the Primaris marines shit-canned decades of fluff by their sudden appearance into 40k, I ask why stop there? If Cawl could so improve upon the Emprah's work, why couldn't he exponentially double the potential recruitment pool by adding in female space marines? 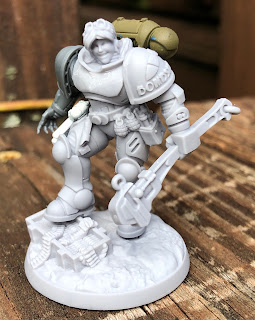 Note the ANGRY MAHREENZ!!! trademark power wrench in her hand. No doubt she prized it from the grip of it's previous owner's still twitching corpse.

Entirely chauvinistic reasons aside, I still like to think of the two missing Legions that even the traitor astartes won't discuss as being female legions. I mean seriously, what holds their treacherous tongues on the subject? 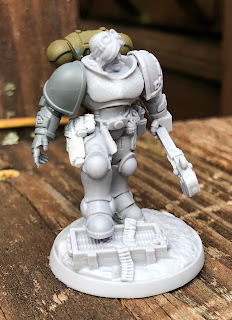 I shaved off the accent plate on her torso just beneath the collar to make room for an Aquila decal or the like.

Maelee, is Bombshell Minis' Gencon release mini, and a fine one at that I think! I didn't care for her not-bolt rifle and power pack (can't be too similar so as to avoid a lawsuit...) and so replaced them with a spare arm, holster and then sacrificed an actual primaris marine for his backpack. 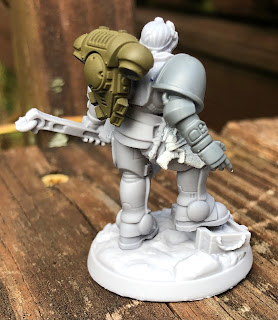 Yeah, I need to attach a helmet to her belt so as to add the obligatory Lt. stripes.

In the rare event that she sees the table top rather than just the display case, she'll serve as a Primaris Lieutenant (well of course, lol). I was thinking of painting her up in the colors of the ANGRY MARINES!!!! arch nemesis-the Pretty Marines.

Hey, I was around when female Marines were available from GW (technically they were proto-Adepta Sororitas but whatever) so I have nothing against the idea. Just don't push the idea of bearded Squat women on me...

Angry Marines on the other hand
...

Paint more Angry Marines, got it!

She needs a thunderhammer so she can administer coup de gracies ....

To be honest, with your dislike of repeating any color scheme beyond a 2nd or 3rd model, I keep expecting you to just do a My Little Pony chapter so they can all be painted a different scheme.

Liking the notion of you sacarifcing a primaris marine; I expect to hear duelling banjos being adopted as the TN anthem.

And then the lady marine heresy, the least of your crimes, filthy heretic.

@Zzzzzz: lol, I used to have a decal on the back of my old truck that said 'paddle faster, I hear banjo music'.