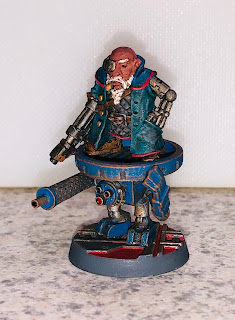 If there's one thing that the Squats loathe about the galaxy ('nids aside), it's the physical need to have to look up to all of the lesser races of the galaxy. It absolutely infuriates them! To remedy this, the previously forlorn Captain Teague has gotten himself a new abeyant (the definition for those not sure as to what that is).

Teague has commandeered a cargo droid (also from the Starschlock KS) from his ship's inventory, replaced one arm with an autogun (that impressive cooling jacket is as much for show as it is function) and controls the bot via a remote in his pocket. 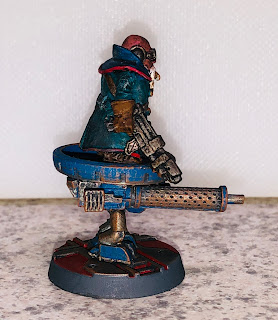 The intimidating side...
I'm sure though that it took some practice, and none too few falls before getting accustomed to the droid's gate in order to use it as a mode of personal transport.
Now seeing eye-to-eye with those verminous humans, Captain Teague is all but certain to be given his proper due (and has a few rounds ready for anyone who doesn't!). I'm not sure what to do with this guy, though Stargrave is still his most likely bet. Perhaps leading the Astro-Guards from my prior post. 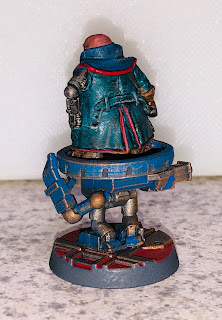 I'd imagine that any attempt at using that droid's hand as a weapon would quickly see Teague dumped onto the ground. Rather it's likely just for balance and as an adjustable step up onto the howdah.

He'd make an excellent Arch Villain in a narrative campaign?

But, but I always play the GOOD guys! Villainy is best left to Neverness...