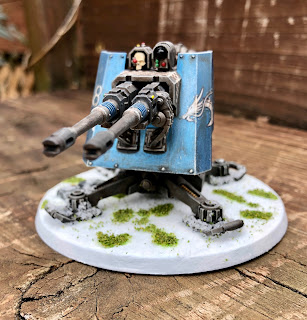 No it's not a servo-strike-whatever-the-fuck-GW-calls it (at least not in my house it isn't!). All this needs is to be fitted onto a WWII destroyer add a few Kamikazes coming in for the kill and...okay, so maybe an Oerlikon turret is more accurate, but how in the hell do you even pronounce that? Bofors it is!

Due to all of the recessed areas, this was a paint as I assembled it project, but went together fairly easily. I modified the gunner's helm with an ocular augmentation lens rather than be hard wired directly into the control panel as that seemed kinda dumb to me. I mean hell, one of his arms is physically connected, isn't that enough? Save that heretical full body hard wired shit for the Iron Hands/Warriors. 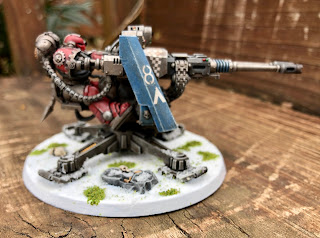 No, there's no ejection seat. With his arm plugged in like that, he'll ride this ride all the way until the bloody end! 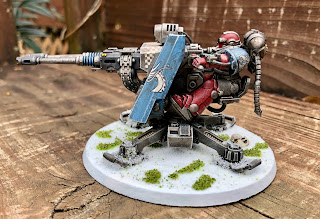 I opted to not make his armor fully red, but rather replaced the blue portions of the other Drakes armor (the one pauldron aside) red. Leaving the rest silver as is the footsloggers' norm. 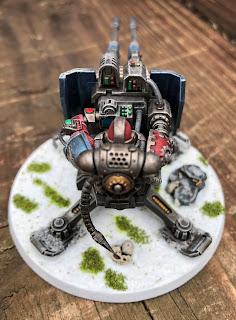 With the right arm plugged in, I'm guessing that the mechandrite is used to access the buttons for his left arm keypad?

This is my first and thus far only (sorta?) vehicle for my Silver Drakes. Rather make that for any of my Primaris marines. With a sedate 3" movement rate, I can see this slowing my Drakes foot slogging combat patrol down a bit. However with the highest strength, longest range and best rate of fire for any unit in my little army, I'm sure they'll not leave this behind. 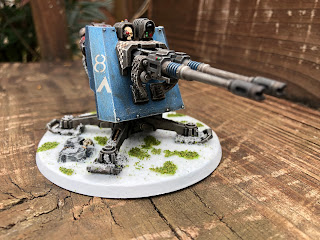 The '8' pertains to the company affiliation, and the chevron is self-explanatory.

Big boomer! ...I assume this thing can't move after deployment?

It has a 3" movement, like so many Primaris 'vehicles' it has grav plates.