...painted in my new house. Indeed, they're the first of ANY minis painted in our new home!

That said, they're nothing special. Same as before, not carrying enough gear for anything other than parade duty. Still suffering from grainy primer and mold lines (though a few were addressed). They look decent enough however for the cannon fodder that they are. 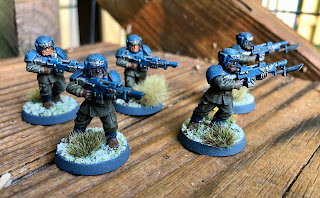 The last two needed to flesh out this squad are needing a bit of repair first. One was built with the incorrect left arm leaving about a 1/16th of an inch gap between it and the corresponding hand holding the lasgun. Whereas the other lacks both of its arms and a head.

I do have the needed bits but they're in the bitz box yet digging that out of the morass in the basement and rooting around thru it for said pieces is a very low priority at this point. 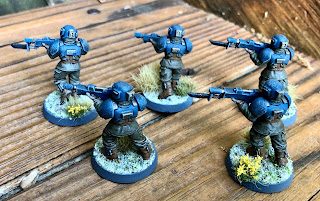 Here they are, running away as usual.

So you could say that they're your "Home Guard"?
Or, and this one is pulled from history and abused with a pun: your "New Model Army"?

Actually they're going to be the 'Palace Guard' led by the RT Janos Draik model who will be an Imperial noble and his estate's security detail (conscript platoon), that's been unhappily dragooned into service by the Inquisition.