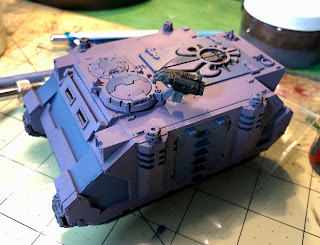 Nothing strikes fear into the hearts of the Imperium's enemies like....lavender?

This is the last of the Rhinos gifted (along with so much else) to me way back when by Kushial. This is the blue Rhino in the pic below (that Landraider can be seen here). 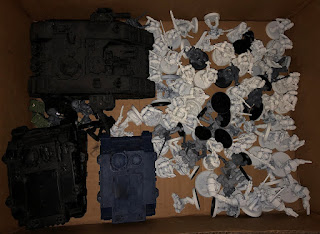 The other two Rhinos went to my Incandescent Coyotes. All of those marines were divvied up between myself and Neverness, and have since been painted in a variety of colors.

Despite looking like this APC belongs to the Sisters of Battle, the Inquisitor to whom this will belong is of the Ordo Hereticus. No doubt the SoBs gifted this vehicle to her in recognition of valorous service or some such thing.

Speaking of the Inquisitor, she (and possibly her retinue) will be painted later this year for Neverness' annual Inquisitorial conclave project. My recently painted guardsmen along with my camo smurfs, will all eventually tie into this project as well. 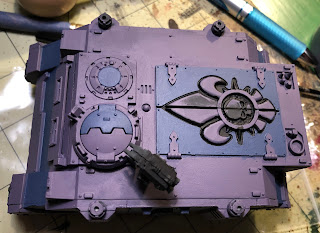 A better look at the overhead view.

I've base coated it using GW's Daemonette Hide and trimmed in The Fang base paints, creating a bit of a muted pastel look, though when all is said (dirtied up) and done I'm hoping it'll have more of a pseudo-urban camo look to it. That said, I'm thinking that unlike the rest of the tank, that fleur-de-lis will be kinda flashy. Haven't quite settled on just how I'm going to achieve that just yet though.