Filling out the officer corps... 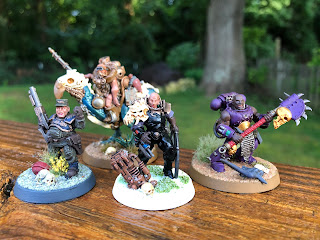 ...not for any of the same factions mind you.

This is kindova shotgun blast of random post covering the various army, or rather 'contingent' commanders that I've painted here of late. As you can see in the pic above, two are for Imperial loyalist factions. One is...debatable, capable of being used as either a loyalist Imperial or traitor astartes Lt. depending on whomever their allies are on that given day. Whereas the Cavalry officer in the back is definitely a traitor (loyalist IG don't enter battle half-naked). 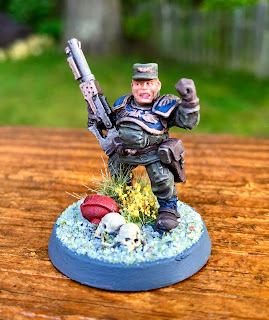 I hate this guy's face. I painted it three times before giving up. I still think it looks kinda meh. 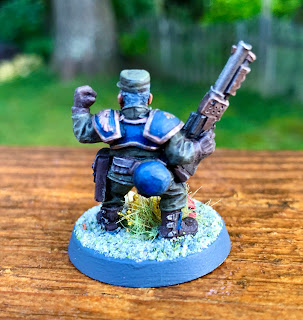 Guardsmen of the Buccaneer (pronounced: Byoocaneer) Battalions (their home world is too sparsely populated to offer up whole regiments for Imperial Guard tithing requirements) have a perpetual chip on their shoulders. Mainly as every 'off-worlder' who reads their regimental name, pronounces it as anyone logically would: BUCKaneers.

No amount of barroom or mess hall brawls will ever change this fact either! Thus, Buccaneer Battalions rarely operate in conjunction with other Guard units, instead often serving as isolated garrison troops and other solitary unit deployments.

Second up we have: Ordo Hereticus Inquisitor Tibadaux 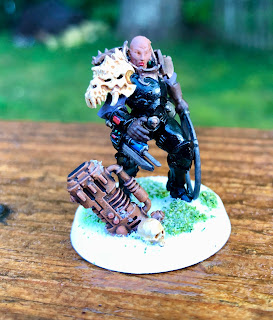 Not too fond of how her bald head and face came out either. She might suffer a head swap at some point... 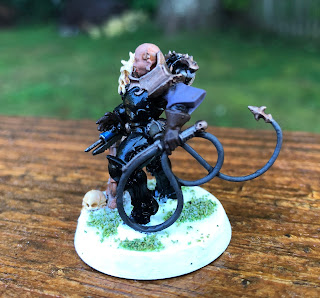 Her [Legends] Null Rod with integral whip. I have a feeling that My Beloved Wolfy would have commandeered this mini as one of hers. 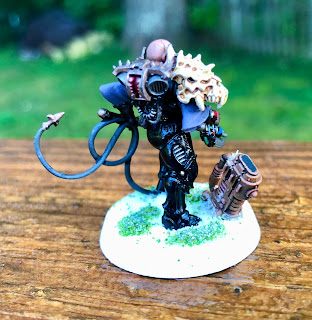 To date, Tibadaux is my only inquisitor based to match my Silver Drakes. Perpetually fighting the Nids, the Drakes would likely be better served by an ordo Xenos inquisitor, though we can surmise that she's just rooting out Genestealer Cultist activity and the like.

Turning debatably towards treason, we next have my Soul Drinker's Lieutenant Amenadiel. 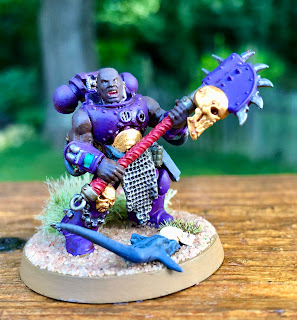 I LOVE this model! 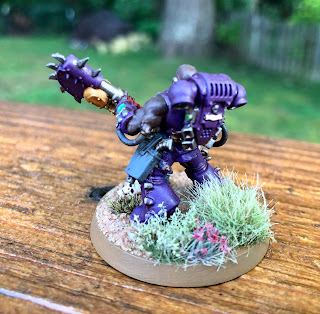 Armed with a bolt pistol and Goliath Renderizer power maul, he is NOT to be fucked with!

Chaos Exalted Champion with renegade traits (whatever they currently are)? Also check.

I've been debating 'ard coating his skin to give him a glistening with sweat look. Not sure how that would look, though I guess if it sucks I can just matte varnish him again. Also wish that there was a relic that I could give him out of the Marine codex that would befit his massive close combat weapon. Undoubtedly, I'm sure Chaos has something suitable...

Lastly, we have this guy: My Renegade IG (Counts as) Death Rider Squadron Commander 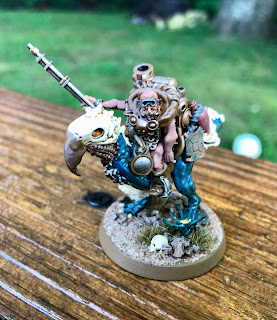 Somewhere there's a gamer who just looked at this and is now pondering the idea of turning their pet parakeet into a mount for 40k! 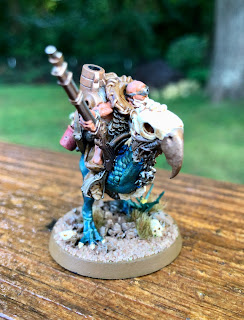 I'm thinking that the beak will be a worthy substitute for the hunting lance, whereas the mount's 'savage claws' will apply as normal. 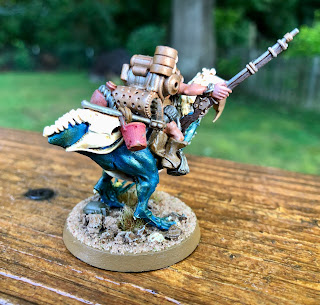 No idea if that's his piss, slop, or sandcastle building bucket.

I got this 3D printed mini off of eBay and am quite pleased with it. Didn't like the original head though, so swapped it out for one from the genestealer cult bitz I ordered when I went shopping for Tibadaux's henchmen. This mini alone has made my renegade IG fall under the DKK regimental doctrine. Tis' okay though, they'll provide Zzzzz with the necessary insurgent excuse with which his MASSIVE collection of Guardsmen can use to lay siege to yet another warzone.

How did you suddenly get so productive? Haha, these turned put great! -neverness