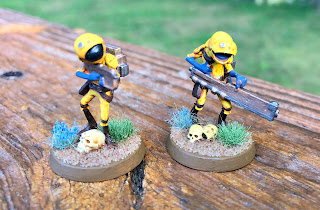 Or rather they would have last weekend, but everyone else bailed ceding whatever planet we would have been fighting for to the Tau Empire with nary a shot fired.

Scraping for enough points to bring my Dal'yth Tau list up to 1k., I rediscovered these Muppet Auxiliaries (I dropped the 'f' in their name, thus they are simply the: Jaloo) in a recently unearthed box from the move. 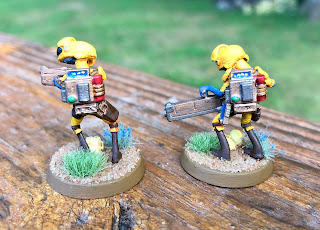 Like my Hogziliaries, I'll be fielding these critters as another counts as strike team. With downgraded stats of course. Their strength and toughness has been reduced to a 2, though they'll not be doubled out by bolter fire thanks to their guardian drone. Their pistols and smaller carbine-esque guns have been reduced to strength 3, whereas the longer guns are stock Tau Pulse rifles. 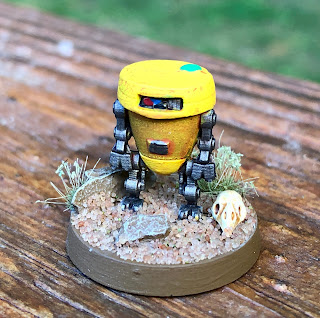 I experimented with this little bot's paint by forgoing primer and applying yellow contrast directly to the bare metal in hopes of making a metallic yellow. However on the finished mini, the 'metallic' torso just looks duller than the head and bottom. Experiment result: FAILURE.

Clearly the Jaloo's antigrav technology isn't as advanced as that of the Tau, meaning it only keeps this top heavy little drone upright, and still needing its little legs to move around. Thus I reduced it's speed to the squad standard of 6", and removed the Fly ability. 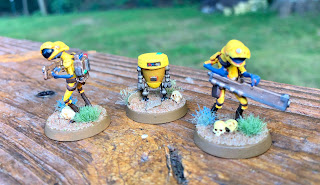 These painted up quite easily thanks to the yellow contrast paint. By the time I finish their squad I'll no doubt have painting yellow technique perfected and will be ready to start on my squad of ANGRY MARINES!! Mwuhahaha!

In a fit of stubborn nostalgia, rather than wear appropriate camo as the rest of their allied Tau brethren do, the Jaloo insist on only wearing colors that would blend in on their home worlds (prior to being devoured by the Nids).

Disappointed by this, the Tau have simply vowed to keep them out of the vanguard so as not to give away any positions. Once battle is joined, Fire Caste commanders are resigned to the obvious conclusion that the Jaloo will inadvertently draw fire due to their ridiculous, brightly colored uniforms.

Ultimately, it's all For the Greater Good, and thus is accepted. 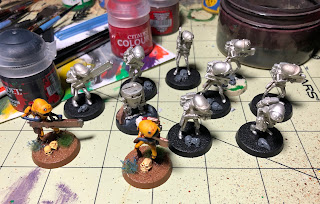 The entire squad on the workbench.

...so, still about those Angry Marines huh? -Neverness

Remember, I have a squad with ANGRY MARINES helmets and a sergeant wielding a giant wrench! -Da Masta Cheef